The Yellow Rose of Texas: 2002tii Lumma Cabrio in Jalopnik circa 2010

Stumbled on this old article from Jalopnik 2010 tonight.  We know this car, and have seen info about it several times.  It has been discussed in 2002FAQ on several occasions*.  It is ultimately a sad story.

This particular article is new to us, though.  My understanding is that this car was in Texas, then sold to a guy somewhere in NC, I think.  It was determined to be too far gone to save, so I think it was parted out.  It is, or was, one of the few Lumma conversion convertibles in the US.  And a tii to boot.  Day um.

GREAT UPDATE FROM MIKE P.!   Posted in Facebook May 5, 2014 8AM.
"Crushed and parted out Car was so bad and rusted everywhere. Rear subframe was about to fall off, rockers were completely shot to the point where the car was ready flex and fold in middle. Was too dangerous to even drive A lot of people got taken for a ride in that car by shiester mechanics according to receipts in that car, one person had well into 5 figures in the car.. Quad headlight grills and set up are still available as is the nice running Tii motor. Tii suspension parts are gone That is about all that was useable on the car."
" A friend in VA who owns the red Lumma Not on FB Not much left of the yellow car though The car ended up here in Raleigh with an unsuspecting eBay buyer (always get a pre purchase inspection) and found its way to me Picture above is at my house " 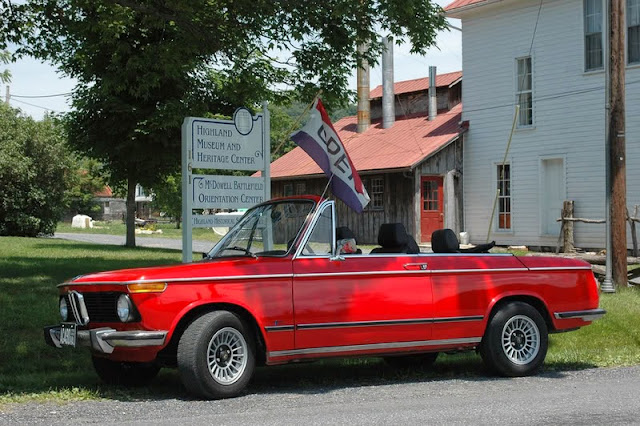 I think that this is the red Lumma in VA that Mike refers to above, awaiting confirmation.  :)  CONFIRMED! 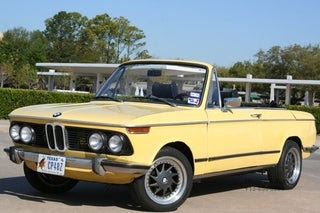 SEXPAND
In the U.S., as Johnson gave way to Nixon, so did the last of BMW's microcars give way to cars like today's Nice Price or Crack Pipe2002tii. But would you give away nearly eight large for it?P
Bayerische Motoren Werke is a company that has established, over the decades, a reputation for building some of the most competent sporting sedans in the world. They also have the reputation of those very same cars being bought by what we lovingly refer to as douchebags. Now, not everybody who drives a Bimmer is a douche, but the ratio of douche/non-douche for the company is way above average, rivaling rival Porsche for top douche honors. If you're a BMW owner, and you're not sure whether you're a douche or not, well. . . you are. Not knowing that you are a douche is a primary sign of douchebaggery. On the bright side, you probably smell summer fresh, or possible of Axe.P
Today's 1973/74 BMW 2002tii comes from an era when douchebags were something women discussed with their mothers, or were confined to politics. Driving this exceptionally rare 2002tii convertible won't make you a douchebag, and its classic credentials may even overcome your inhierent douchiness, should you already lean that way, making you more of an elder douche,or il douche, if you're also a fascist.P
The ‘New Class' BMW sedans first debuted with the 1500 in 1962. The 2002 arrived in America in 1968, becoming highly coveted after owners experienced its nimble handling and classic proportions, plus it finally gave then someplace to put their sisal mats. The 02's 1990-cc iron block/alloy head four cylinder produced 100-hp, and breathed though a single 2-BBL Solex. The tii, as found under this Cabrio's hood, raised the ante to 130-hp, through the application of a higher compression ratio and Kugelfischer fuel injection. Bigger front discs (the rears remain drums), a standard 4-speed stick, and a few other changes make the tii the STD-free hooker of the 2002 line up.P 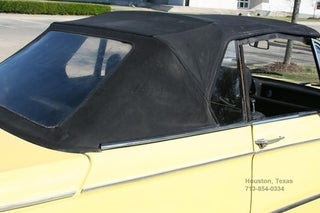 SEXPAND
European importer extraordinaire Max Hoffman is credited with the idea of dropping the 2-litre engine in the 1602 coupe body, creating the 2002 (2000-cc- 2-door), but even Max didn't have the blaupunkt over his head to import a full drop top version. Baur, the oompa loompas of BMW roof hackers, built a 2002 cabriolet that had full framing, a targa section above the front seats, and a soft top rear. This is a full-on drop top with none of that. The top appears to be a professional job, with swing-up side glass and the works dropping into a well behind the seats when folded. As to its origin, Google's not being much help, and I've got that AC/DC song stuck in my head now wondering who made who? who made you? Whatever, there are a number of fully topless tiis (and 1602s) out there, so it's not that anomalous.P 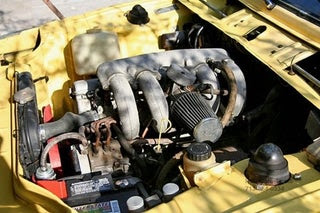 SEXPAND
Under the hood sits the fuel-injected four, and this one has the latter, alloy intakes of the E12 head. The seller claims the engine was rebuilt less than 4K ago, and in fact claims over $33,000 in repair receipts. That seems kind of sketchy considering that the rest of the car looks a little rode hard and put away wet. In fact, water may had been this Bimmer's Achilles heel as, while it may not have come from Nantucket, it most certainly appears to be a rust bucket. There's road rot on the wheel arches, the rockers, the door sills, the spare well, the floor pan, the. . . hell, you might as well call this an Fe2O3tii. The convertible conversion also shows its age in the sag of the door openings, but then again, that could just be the chassis rusting through as well. Inside, it looks like the car has weathered many years of inattention, a fact to which the seller admits, although the dash is remarkable mark-free.P 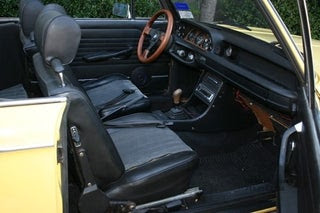 SEXPAND
Along with the rust, there's a good deal of freakiness going on outside on this car. The ad poster claims that the car was started in '73 but competed in '74, and hence the explanation for the earlier bumpers with the later taillamps. He doesn't explain why it has a 1500 four-door's four-headlamp grille, or the reasons behind painting the rear brake drums red. Maybe that's the douche coming out in the car, and the wheels bolted over those slatternly-hued drums are Jedi master-level douchy. One last thing to point out is that the claimed VIN number doesn't jive with tiis for either '73 or '74; it starts with 273, and factory fuelies supposedly were 276 for '72-'73, and 278 for '74.P 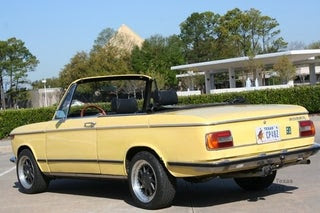 SEXPAND
So many questions, so many enigmatic elements all rolled into one very interesting ride. A stock 2002tii is a joy to drive, although it doesn't drive like a modern car - it's no where near as fast as your neighbor's Camry - but it still proves that BMW figured out the secret sauce way back when, and has just been making bigger burgers ever since.P
In order to sink your teeth into this burger, you'll need to come up with $7,999, hold the mayo. What do you think about that price considering this one comes with all that drop top-tastic and rust-induced air conditioning? Is that what you'd be willing to drop down to put this tii's top down? Or, is that too much cheddar for so much swiss cheese?P
You decide!
http://jalopnik.com/5654628/for-7999-this-2002tii-goes-topless-so-you-can-too

More pics of this Lumma from our files: 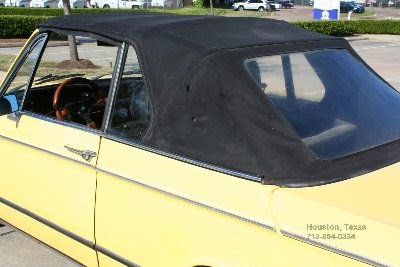 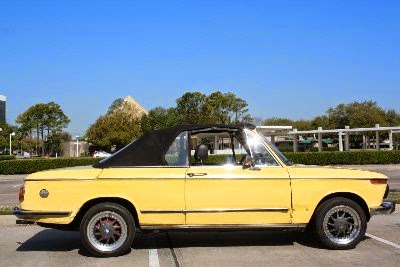 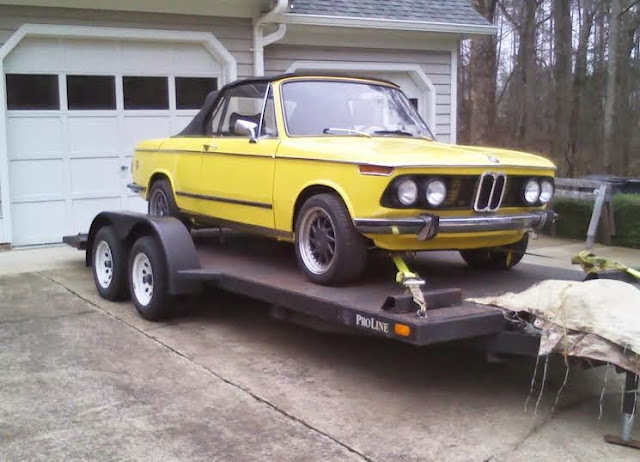 Hey, wait a second!  I recognize that garage!   Famous place, and there is a Baur around there somewhere!  ;) 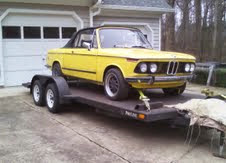 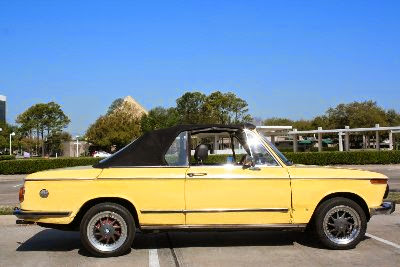 Here is one of the 2002FAQ threads about this Lumma, started by the guy who bought this car shortly after this article appeared.
http://www.bmw2002faq.com/topic/109420-new-guy-with-a-lumma-73-tii/?hl=lumma+texas#entry210845
N.B.  I was able to trace the contact info on the buyer above, but I have not contacted him.  He no longer owns it.