Once again, Baurspotting likes to bring topics of interest to our readers.  My wife came across this and sent me the link.  Thanks, Cath! 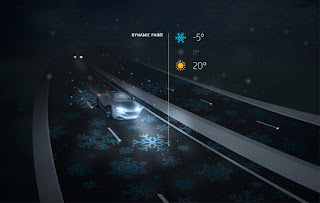 Smart Highway reinvents the highway, making it smarter and safer. For example, dynamic paint would activate to alert drivers of hazardous conditions.

The cars we drive change on a yearly basis, but the roads we drive them on have stayed largely the same since the late 19th century, when a new-fangled material called asphalt replaced macadam as the construction material of choice. Luxury car makers seem to debut a new concept car every month--roads are less glamorous, and don’t get "reinvented" very often. Dutch designer Daan Roosegaarde is hoping to change that withSmart Highway, a plan to modernize European highways.
“We live in a city of endless gray concrete roads, surrounded by steel lamps. They have a huge visual impact on our city,” says Roosegaarde. “But why do they remain so rough and without imagination? Why not make them a vision about mobility, a symbol of the future?”

Roosegarde and Dutch civil engineers Heijmans Infrastructure believe that by ignoring the roads and focusing on the cars, we’re missing the forest for the trees. The group’s plan proposes embedding highways with technology that can visually communicate when the road is slippery, charge your car as you drive, and generate electricity for its own lights. While it remains conceptual, the plan gained considerable momentum this week after it received a Dutch Design Award.
The Smart Highway isn’t a completely new road, but rather, a kit of parts that can be applied to existing roads as needed. For example, something the designers call "Dynamic Paint" communicates with drivers about weather and traffic changes. When the temperature drops under freezing and the roads become slick, the paint would activate, covering the road with a dusting of bright cartoon snowflakes. Similarly, a glow-in-the-dark paint treated with photo-luminizing powder could reduce the need for auxiliary lighting. “Charged in day light, the glow-in-the-dark road illuminates the contours of the road at night for up to 10 hours,” says Roosegaarde.


More technically ambitious is the team’s plan for an Induction Priority Lane, designed to charge the batteries of electric cars as they pass overhead via a series of induction coils embedded under the asphalt. Wind Lights attempt to capitalize on the rush of wind generated by a passing car--hundreds of tiny pinwheel-esque wind turbines would light up as you drive by.
How realistic is their plan? The dynamic paint concept would be fairly simple to implement, though the cute snowflakes will probably be value-engineered out--a simple color-coded warning system would work just as well. Inductive charging, though, is a more complex proposition. I’m no expert on the technology, but from what I understand, it’s already being tested by researches in South Korea.
But as some experts have pointed out, induction charging technology requires plenty of metals and materials like lithium, which is already in high demand. To supply enough just for Holland, the densest highway network in the EU, manufacturers would have to scale up their production exponentially, and it would be expensive. Still, it’s a promising idea--and critics probably did similar naysaying about asphalt back in 1870. Asked about how much smart highways will cost, Roosegarde jokes, "it would be more expensive than a current road, but less expensive than building a new planet Earth."

How Many Baur TC1s Came To The US? Baur TC1 Production and Export Numbers

How Many Baur TC1s Came To The US?  Baur TC1 Production and Export Numbers! 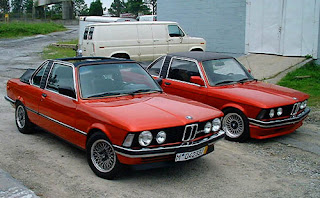 THIS IS HUGE, FOLKS!

Ok.  For the first time, and based on the charts below from the Baur IG Registry, Baurspotting is going to go out on limb to estimate how many TC1 Baurs came to the US.

Yeah, you heard that right.  Folks have been asking me this for the past year and a half, and we have had trouble finding any reliable information that talked about numbers.

Well, we still don't have a definite number---- we may NEVER have that---- but what we DO have is information that allows us to make a reasonable estimate of the number of grey market E21 Baurs that may have come into the US.

Check out the "Total Production of TC1 Models" chart below.  At the right of that chart is the following:

Where indeed?  I don't know if there were other countries besides the US that had a 'grey market' for BMW Baurs.  It is possible that some of those 294 (+/- 14) went to other places.

The theory I am advancing here, and it is ONLY a theory, is that those 294 (+/- 14) may represent a maximum number of TC1 Baurs that were brought into the US through the grey market.  Don't forget that BMW officially states that 3 additional Baurs were imported through their dealer network.

So that is Baurspotting's estimate of the maximum number of TC1 Baurs that could have come to the US.  The number could easily be lower than this estimate.  But I highly doubt that it could be much higher.

What do YOU think?

I am open to suggestion or argument.  This number is not set in stone.  I could be wrong.  :)  But it is a reasonable starting point for the discussion.

So if we accept that theoretical starting number (294 +/- 14), we may wonder how many of those are left after about 30 years.

We have found about 85 93 (as of 6/9/2014) here at Baurspotting, give or take a couple.    There are still more to find out there, no doubt.  (The discovery of "NEW FINDS" in the US has slowed down considerably since this post was first published in October 2012.  We have only found 7 more in the last 1 1/2 years!  I am not sure what this means, but it COULD mean that we are getting close to our goal of finding them all!   It seems that we have picked off most of the 'low-hanging fruit', and those that remain to be found are perhaps well hidden.)

But I do think we are off to a pretty good start toward our goal of finding them all!!

Onward and upward, folks!  Keep up the GREAT work!


This is an update, and an expansion, of some data that we have previously discussed.
This info was obtained from our friends at:
http://www.baur-tc1.de/tc1-individual.html
Thank you!

Check out their site!  Tons of great Baur stuff there!
Posted by tom82baur at 8:36 PM No comments:

Ok, here is a quiz for a rainy Friday afternoon.  You will of course recognize the iconic badge above:  the BMW logo, that famous, immediately recognizable symbol of The Ultimate Driving Machine for decades.  This one dates from about 2007.

Below, you will find two more logos.  One is a view through plane's propeller, showing BMW lettering in the perimeter.  The second logo also shows a ring with lettering, different from the first, with a horse symbol in the center.

Which of those two logos is the origin of today's BMW logo?

From which of those two logos did the present logo derive?

The Rapp Motor logo was the origin of the BMW logo.  BMW formed March 3, 1916 making motorbikes.

WHICH LED TO THIS:

"For many years, it was believed that the blue and white parts of the BMW logo symbolize the sky, seen through moving propeller blades, as seen on the cover of a 1929 BMW aircraft engine magazine. But the logo first appeared in the 1918 Bayern-Flugmotor manual, and was the first time the BMW logo appeared in a printed publication. This logo came from the original Rapp Motor aircraft engine manufacturer logo, the compnay that grew into BMW as we know it today."
http://www.cartype.com/pages/715/bmw

The Blue and White colors in the logo are the national colors of Bavaria, the home of BMW. They are also the colors of the Bavarian Royal Family, and their placement is reportedly reversed in the BMW logo, in deference to that fact.
"flag:  white over light blue."
The Royal House of Bavaria

Ok, here is a quiz for a rainy Friday afternoon.  You will of course recognize the iconic badge above:  the BMW logo, that famous, immediately recognizable symbol of The Ultimate Driving Machine for decades.  This one dates from about 2007.

Below, you will find two more logos.  One is a view through plane's helicopter, showing BMW lettering in the perimeter.  The second logo also shows a ring with lettering, different from the first, with a horse symbol in the center.

Which of those two logos is the origin of today's BMW logo?

From which of those two logos did the present logo derive?

I don't think anything more needs to be said.  Gorgeous work, Andrew!  Wow! 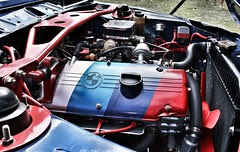