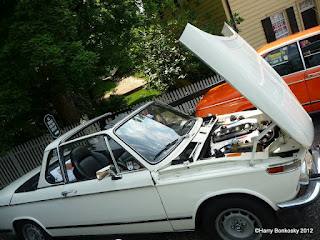 Readers may recognize that we posted this pic in our "Known Baur Targas in the US' blogpost a couple of days ago.
http://baurspotting.blogspot.com/2012/10/known-2002-baur-targas-in-us-so-far.html
(scroll down to see it)

Anyway, this pic was taken at The Vintage 2012 in Old Salem, NC last Memorial Day weekend by our friend, HarryPR.  At the time, we didn't know who the owner was.  Clay W. of 2002faq informed us that Deb and Terry were the owners. (Thank you, Clay!)

Clay also generously provided us with a link to the story behind this cool little car.  Baurspotting is pleased to share it with you here.

This kind of story is an inspiration to car guys/gals, BMW enthusiasts, and '02 Lovers everywhere!  Congratulations to Deb, Terry and Duncan too!  And we are fortunate that Terry and Deb were evidently the kind of parents who encouraged Duncan's reading:  Because without that, This may not have happened at all!  Nice job!


Here is the story in its entirety below, but please also click the link to Terry's page, where this story and more can be found:
http://www.terrysaytherauto.com/M3EngineIntoBaur2002.htm


Click on thumbnails for larger photosThe steel 318 lower pan is used instead of the aluminum
M3 lower pan because the oil pan will now be the lowest part of
the engine, and the steel is much less likely to be broken by
impact.
Cleaned up a tii fuel tank, installed it, installed the tii fuel
sender and fuel pick-up. Mounted the M3 electric fuel pump and
fuel filter under the car, drilled a hole for the new larger diameter
fuel suction line, installed one of the M3 high pressure steel lines
along the left rocker panel under the car and attached the rubber
connecting hoses from the pump to the steel line and from the steel
line to the fuel rail at the engine. Ran another hose from the fuel
pressure regulator to the stock plastic body fuel line to serve as the
fuel return line [BMW fuel injection systems use continually
recirculating fuel].
Trimmed the fan clutch attachment threads at the front of the
water pump to give a few millimeters more radiator clearance, and
installed the same 320i radiator we had had in the car before.

End of day 2. Wait just a darn minute. There's still a ton of
stuff to do. Somebody is slackin' here. Two days are done on a
three day job---somebody is gonna have to bust butt on day 3.

Installed the modified trans and driveshaft, installed the
narrowed upper and lower oil pans, and turned the brake booster
180 degrees to gain a bit of clearance. End of day 3.

End of day 3? Aren't we supposed to be done? Oh, it was a trick. They had 3 or 4 or 5 guys working three days!! That's 10 or 15 man-days, so we're right on schedule.
The rest of the days:
Taking out the 320 radiator and installing the M3 radiator
and coolant reservoir; making the bracketry to hold them in place.
Finding coolant hoses to connect engine with radiator and heater.
Routing wires for the engine harness and the DME control unit.
Fabricating brackets to install the relay pack and air flow meter.
And, and, and....a thousand other details complicated by our sudden decision to take the car to the European celebration of the 2002.  But we got it done---Brandon Littleton wrapped up the details in time for us to take it to Germany.
So, how does it run? Smooooth and powerful, both on the street and on the track (where it needs BRAKE upgrades). Would we do it again? Maybe not, but I'm glad we did it this time.
Click thumbs below for larger images

Congratulations to Deb and Terry on great project!  And thanks to Clay W. for linking us to it!
Posted by tom82baur at 5:31 PM