Ok, this post is a bit of a personal nature.  Please bear with me, I think you may enjoy it.

Some of you may recall that I became a grandfather for the first time last October 12 (2011).   My son and his wife honored me by giving Abram Thomas my name as his middle name.  This is very special in my family.

A couple of months later, I came across a BMW Kid's car on craig's list, and I thought... wow, what a perfect gift for my grandson, from his Car Guy grandfather!   (It should be noted that his favorite current book is about cars!  I am NOT making this up!)  However, by the time I got around to answering the ad, it was gone.  A few weeks went by, and another one came up locally.  Once again I was a day late and a dollar short, and I missed out on that one also.

So, sometime last January, I happened to be in the local BMW dealer's part department getting some parts, and.... lo and behold.... there is a BMW M-Powered Kid's Pedal car on display.  After missing out on two already....I was powerless to resist, and I took it home.  Bear in mind, my grandson at 3 months old  is nowhere near ready to have any use for this.... but I wasn't about to let this one get away! 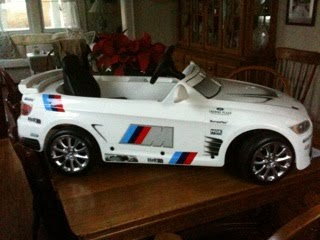 Here it is, in a pic taken the day I bought it, sitting on my dining room table! What a great looking little car!   I loved it!  BMW M Power!  Perfect!

And so, the waiting begins.  I decided that, ready or not, I would give it to him on his first birthday, which was still some 10 months away!  It sat in my basement, waiting for that day!

Well, that Long-Awaited Day came yesterday!  My son, Andrew, and his wife, Sara, hosted a party for Abram's First Birthday on Saturday, October 13, 2012.  I waited until the cake cutting to bring the car in, past the 40 or so guests, placing it right on the dining room table with the birthday cake!  A HUGE hit!

Here is a pic sent later that day of Abe in the car!  Look at that smile! 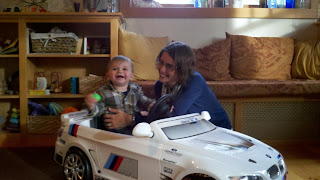 I think he likes it!

Now, for the 'Piece de Resistance!"  I just received this pic from Andrew and Sara, entitled 'channeling Grampa"!: 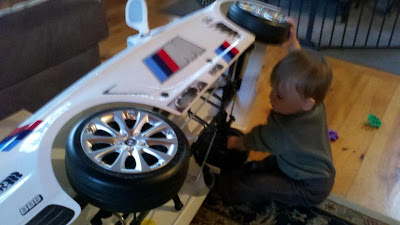 Do you believe it!

Is that the cutest thing you have ever seen?  OK, Ok. I confess I may be a tad biased here.  He is fascinated with how the wheels spin!