Ok, Baurhunters.  I was surfing through r3vlimited today and I came across this Baur from September 2007.

Your Mission, should you choose to accept it, is to find this Baur!  :)  I have attached some clues below.... it bears a remarkable resemblance to conkitchen's white Baur, which he transformed into the car that is now docjohn's in Arizona!

Look at what is parked in the background!

This is a project car, and deserves to be put back on the road.
Clear title.
Will part out if no takers (would be a shame)

"To my way of thinking, the 2002 is one of modern civilization's all-time best ways to get somewhere sitting down. "  David E. Davis

Thanks to E21 bimmerforums member roverclassic for this link today! 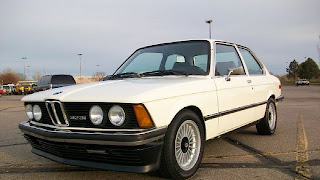 Check this out from Jalopnik:: What do you think.... go to the site and vote!
EditRepublishRoundup

A palindrome is a word or phrase that reads the same both forwards and backwards - for example never odd or even. Today's Nice Price or Crack Pipe E21 is novel in the U.S. as its a 323i which is both even and odd as well as palindromic. The question is, which way will you go on its price?
I was shocked - SHOCKED I tell you - at all the haterade guzzled at the expense of the B-series engine and the LoCost Seven itself yesterday. Dudes and Dudettes, the MG 1800 is a solid citizen of a motor and can produce gobs of power for not all that much bank. Still, that vitamin B was seen as a pox of the house of home built and the Seven came away with a solid 65% Crack Pipe loss. Apparently that many of you equate this car's Lotus position with being bent over.
Okay, a couple of weeks back I made you all a promise that we would be taking a break from German cars. Well, today the embargo has been lifted. Can I get a halleluja? Here we have a 1979 BMW E21 Coupe, from Germany. Big whoop you might say, that generation of 3-series being - in America at least - one of the least desirable, having been the recipient of an underachieving version of BMW's M10 four cylinder. That engine, when saddled with the then new-fangled emissions controls, could only muster 100-hp back in '79.

This car is different however. Your first clue should be the thin Snidley Wiplash mustache bumpers where you'd normally expect to find massive oxidizing rubber snood-surrounded aluminum beams. Then there's the badging - on both trunk lid and forward-canted grille - which read 323i. That extra 3 means this car sports not the M10 but the six cylinder M20, which was good for 143 ponies when Carter was in office.
The 323i was the top model back then, and as Europe typically likes to deny America its finest, one that was never offered here. According to the ad, this one was privately imported and federalized way back in 1980. Not only that but the seller claims to have all the maintenance records dating back to that year, as well as mason jars filled with his own urine and three decades worth of toenail clippings stuffed in pillowcases.
Okay, so I made up the pee and pillowcase bits, but the OCD oil change and tire rotation records are a good thing, right? Another potentially good thing is the mileage which at 125K is a Mama Bear like not too many to be worn out and not too few for everything to be shriveled up from lack of use. The exterior looks to be in pretty good shape for any number of miles, and sports a set of period-appropriate turbines. The white paint shows no obvious imperfections in the pictures, and all the trim appears intact. The only potentially questionable element outside might be that (Kamei?) airdam, but even that's open to debate.

Inside, the Recaro passenger seat seems to be in serviceable shape while the driver's throne has gone all Phantom of the Autobahn with a ill-fitting cover potentially highlighting an aria of issues. Other than that the dash looks complete although it's impossible to tell if it is free of cracks - a common problem on cars of this age - and it does have the proper accoutrements of a sport steering wheel and three-pedal footbox. Also the car sports A/C and one of those cool tits-up radio placements.

The seller says that recent maintenance items filling the car's diary include water pump ($), injectors ($$), fuel pump ($$$) and wheels and tires ($$$). That's a lot of $$$ and now it's up to you to determine if the 4500 in $s the seller is asking for this 323i is a good deal or not.
As noted earlier, the E21 never caught on the way the precedent 2002 or following E30 have, and were this the world's nicest 320i I think we'd all agree the seller is in deeper crack territory than Kevin Smith's proctologist. But this one being the grey market but fed-approved 323i raises its interest level significantly. But does it raise it enough? What do you think, is $4,500 for this 323i fair enough for you to choose Nice Price when you rise to vote, sir? Or, is that enough for you to say madam, I'm Adam, and that's Crack Pipe?
You decide!

Now also on Bring a Trailer (BaT)! Check out the comments!

This 1979 BMW 323i was gray-market imported in 1980, and has full documentation ever since. We love these 6-cylinder E21′s, and this one also has our preferred Alpina-style 15′s and a white/black combo that is better than the plethora of browns and golds that so many still wear. Find it here on Craigslist in Boulder, Colorado for $4500.