Readers of this blog may be aware that I have lamented on a number of occasions the fact that one of my favorite cars, the BMW E30 325iX Baur, was produced in extremely limited numbers (about 115 or so---- I can never remember exactly how many), and NONE were ever imported to the US.

Well, thanks to Mike and Lore E., I have uncovered some startling information!  There has been an 4WD Baur-type convertible right under our noses, and.... it has been there for over 30 years!

OK, so it doesn't have the looks, or the cachet, of the BMW E30, or the Baur nameplate, but.... if you are indeed looking for an 4WD Baur-Type convertible without having to import one from ... here it is!
They are quite rare and reportedly often leak. They can switch from two wheel drive to four wheel drive, so they are technically NOT AWD. It appears the four wheel drive system was called "". That is one of the same names that Jeep used for its 4 wheel drive system years ago. American Motors (AMC) which manufactured the Eagle, also made the Jeep, you will recall. They were later bought out by Chrysler, which dropped the Eagle, but kept the Jeep.
So, this AMC Eagle appears to be the venerated Jeep's cousin. Day um. Learn something new every day!
:)

1981 AMC Eagle Convertible
During 1981 and 1982, a Sundancer conversion convertible was available. The Eagle's monocoque (unibody) body was reinforced and a steel targa roll bar was welded to the door pillars for passenger compartment protection. The front portion of the roof was a removable lightweight fiberglass hatch, while the rear section of polyvinyl material and the back window folded down and had a boot cover when in the down position.[37]
The conversions were approved by AMC with the cars ordered through select AMC dealers in the customer's selection of options and colors.[38] The conversion cost approximately $3,000 and the dealer's list price was $3,750.[39] The conversion was performed by the Griffith Company headquartered in Fort Lauderdale, Florida, that was also responsible for the "Sunchaser" Toyota Celica convertible.[40] Both Griffith conversions are considered coach convertibles.
http://en.wikipedia.org/wiki/AMC_Eagle 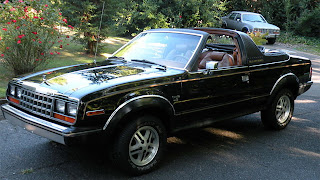 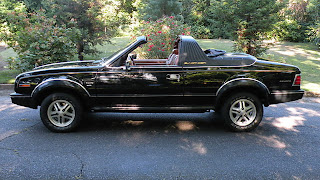 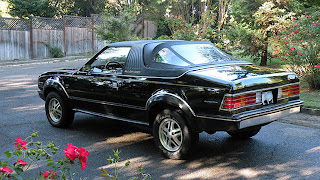 Rare AMC Eagle Sundancer is ultra-weird fun in the sun:


We aren't sure there is such a thing as a normal AMC Eagle, but we feel safe saying other models of the 4x4 car were a lot less strange than this Sundancer convertible model. These convertible Eagles were offered through AMC dealers as an expensive coach built option for only two years. The Eagle's notoriously rust prone nature combined with the very low initial production numbers makes surviving Sundancers like this one currently on Ebay very rare birds.
AMC Eagles were the perfect vehicles for people who wanted all the convenience and capability of a four wheel drive vehicle in a strange automotive package. For 1981, AMC decided to make that automotive package a little stranger by adding the Sundancer option. Eagle buyers that checked the $3750 option got their new AMC with a Targa roll bar, fold down rear roof and lift off plastic top in place of its conventional roof sheet metal.
According to various internet sources, approximately 200 Eagles with the Sundancer option were produced in 1981 and sold throughout the 1981 and 1982 model years. No one knows exactly how many survived, but almost none is a pretty safe guess. How this particular Eagle Sundancer managed to avoid the fate of so many others is unknown but if the car's current Sacramento, Ca location suggests a life spent far outside the rust belt.
The owner doesn't specify much about this AMC besides the fact it has been well taken care of and runs as good as it looks. Bidding for this rare Eagle Sundancer has already reached $6299 with over five days left on the auction. Even though it isn't the most desirable vehicle, anyone who wants this interesting AMC will have to bid to win because who knows when the next time another one will come up for sale.

Our own bimmerforums member BruceH even put in a plug for Baur in the comments section of BaT last August, below!
http://bringatrailer.com/2011/08/11/1981-amc-eagle-sundancer/ 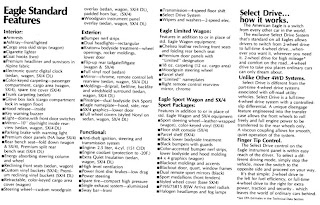 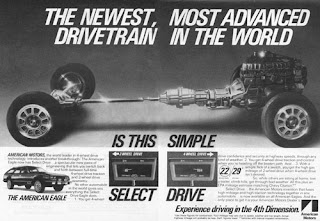 Two new models were introduced this year. The sporty SX/4 based on the Spirit and the low priced Kammback based on the old Spirit/Gremlin. All Eagles this year received new bumper end caps that improved the overall looks of the cars and a new trim level "Sport" was introduced. Other new features were a restyled grill and the optional alloy wheels. The Sport trim option included blacked out ground effects, blacked out chrome and grill. Under the hood a four cylinder engine (2.5 L) was standard making the 258 engine an option and a manual transmission became standard equipment as well. Three trim levels were offered in 1981; Base, DL/Sport and Limited. During the mid year all Eagles were fitted with select drive. This meant the driver could now choose between 2 wheel or 4 wheel drive.
Posted by tom82baur at 11:36 PM