Here is what appears to be a great site for E30 owners in general, including E30 TC2 Baur owners, that I stumbled upon tonight.  It is really amazing to see what is out there these days.  I have only taken a brief glance at this site, but it appears to be a wonderful resource.  It is a Wiki related site.... not even sure what that means.... but, thanks to my son, Brian, I have recently become a Wikipedia contributor/editor... and I really see it as having incredible potential!  I am starting slowly in Wikipedia, btw, but I have made some small contributions to the Karosserie Baur page.  Check it out! 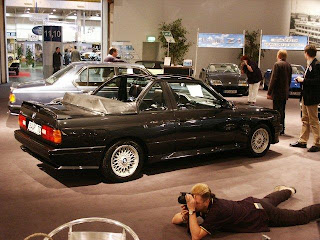 Jump to: navigation, search
Karosserie Baur is a German coachbuilder with over eighty years' experience of modifying BMW shells. They are responsible for producing the E30 Baur Convertible, known on the E30 Zone simply as a Baur, as well as designing the official E30 Cabriolet.

Baur M3
When the E30 was originally launched in 1982, it was only offered in a two-door Saloon shell, with a four-door version appearing soon after. BMW had no immediate plans to offer a Cabriolet, although they knew there was a demand for a soft top. So in co-operation with Karosserie Baur, they offered a roof conversion as an optional extra, which saw the main roof skin and rear window removed and replaced with a folding canvas roof. This was a design that had seen success on the earlier E21 where it was known as a "Top Cabriolet" or TC. The Baur E30 is known as the TC2.
Despite the introduction of the official E30 Cabriolet in 1987, BMW's long history with Baur meant that the TC2 conversion was still available as an option for Saloon models for the entirety of production, finishing in 1991. While never as popular as convertibles, it is still possible to find Baur versions of the entire E30 model range, from the 316 to the 318iS, and even an M3 version was constructed.

Total Baur production was 10,865 in Europe, and 3,561 in South Africa. This was broken down into the following quantities:
Of these, 1806 units were delivered to the UK.

The cost of a Baur conversion was extremely expensive at the time (£3,795.00 at 1987 prices), so it was not uncommon to see DIY conversions done by backstreet garages on standard E30 shells.
Genuine Baurs carry an identification plate from the factory, located on the left side door shut. The plate will detail the factory name (Karosserie Baur) as well as the build number of the car, and the specified roof colour.
The first TC2 Baur was numbered B40001. Therefore, a Baur with the number B500381 will be the 10,381st Baur produced.
Following the build number will be the roof code, a two-digit number between 10 and 19. This determines the roof material and colour, and is:

As a respectable coachbuilder, Baur put a lot of time and effort into the design of the TC2. The aim was to build more than just a cabriolet; their roof design would also offer targa- and landau-style open tops as well.
This meant that the soft fabric roof would be split into two parts, with the division across the B-pillars. These two parts could then be individually removed. In that way, removing the forward section offered the same roof as Porsche, who owned the copyright to the "targa" name, while removing just the rear section offered a landau rear opening. Removing both sections converted the car to a full cabriolet.
To do this, it was necessary to stiffen the shell so that neither safety nor performance would be compromised once the roof was removed. Baur therefore designed a "cage", a reinforced frame that runs under the roof gutters and C-pillars, connected across the boot and roof by lateral bars to form a roll-bar. Two holes are drilled in the frame of the side windows to locate the frame, and then the whole construction is welded to the existing E30 structure.
Unfortunately over time, the locating holes let in moisture, allowing rust to develop between the frame and the car body. Once the rust is visible on the outside, it usually means the car is beyond economical repair.

A very rare model, built as a test platform by Baur and Kohl, was a genuine E30 Coupe. Compared to the 2-door Saloon, the Coupe featured a significantly larger rear screen and a much smaller space between the B- and C-pillars, making the rake of the rear window a lot shallower. The overall body length was not reduced, but the profile of the car aimed at a fastback design, with the possibility of a future hatchback. However, the design never saw serious production and only four Baur-Kohl Coupes are known to exist. Learn more about the Baur-Kohl Coupe

With so few Baurs made, almost all of them will be known to E30 connoisseurs somewhere. Make sure people know your Baur by adding it to the Baur Register.
Posted by tom82baur at 9:22 PM