Baurspotting at Lime Rock Historics Part I: The Prologue

This is the first part of what will probably be a 3 or 4 part series about my adventures at the Lime Rock Park Historics, Labor Day Weekend, September 2012.  Adventures, you say?  Well, frankly, yes.  You see, this was not just a matter of going to another car show, although this was a very special car show, indeed.  No, no.  This was a Quest... a Quest to obtain and deliver a very special gift to you, my Baurspotting audience, and to Baur lovers around the world!

A Holy Grail, of sorts. 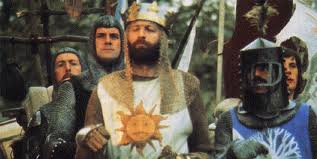 And.... I had the advantage of having seen Monty Python and the Holy Grail numerous times in the past, so I knew all about Fantastic Quests.  So... I've got THAT goin' for me, as Carl Spackler might say.  And my Quest even involves a real Knight:  Sir Stirling Moss, O.B.E.

It's tough.  The Art of mixing business and pleasure, that is.  I will be the first to admit that I haven't mastered the Art yet.

Well, I almost paid the ultimate price for failing to manage that Art last weekend at Lime Rock Park.  But, thanks to the kindness of strangers, Baurspotting's newest Heroes, the disaster was narrowly avoided.  Here they are, btw:
http://baurspotting.blogspot.com/2012/09/baurspotting-heroes.html
Stay tuned, Dear Readers, more on that as we go along.


First of all, I should probably clarify the intial premise:  in order to mix business with pleasure, you have to have business.  Baurspotting is only a business in the very loosest (most loose?) sense of the term.  It is more like a non-profit charity, really.  It does involve work, but it is a Labor of Love, and there is no pecuniary remuneration to speak of.  I do it because I love it.

So when I go to a car show, I go because I enjoy it.  In the back of my head I may be thinking of possibilities for a blog post.  Prioritized in that order.  And therein lies the problem.  I have no training as a journalist or a photographer, so having the camera ready, or preparing pithy questions to pose, are really both afterthoughts for me at car shows, etc.  But I am learning.

This weekend at the Lime Rock "Sunday in the Park" is a perfect case in point.   I was totally unprepared for what I encountered. 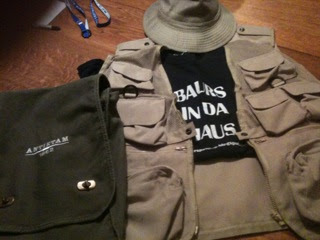 Well, not TOTALLY unprepared:   I DID have some Gonzo Journalism Gear ready!  ;)  Fear and Loathing at Lime Rock Park, baby!  I was prepared to pose as a journalist if I had to!  And three cameras.

Well, an iPhone, an iPad, and a Nikon CoolPix.  So no REAL cameras, actually, just a couple of gadgets on which to record some primitive images.  Ok, first mistake.

Note to Self:  bring a REAL camera next time!

Anyway, Labor Day Weekend is the occasion for the 30th Annual Lime Rock Park Historics.  Here is some info on it:
http://www.limerock.com/index.php?option=com_content&view=article&id=66&Itemid=60 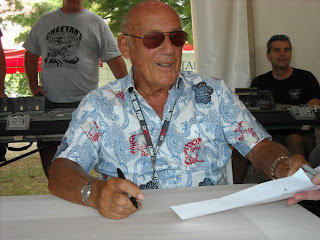 Baurspotting readers may recall a recent blog post featuring Sir Moss.  Sir Moss, btw, is the signature he uses for autographs.  How do I know that?  Well, truth be told, that was a significant part of the reason that I wanted to be at Lime Rock this weekend in the first place!

Back in August I came across an issue of Der Bayerische Magazine from December1979 that featured a review of the BMW Baur TC1 (E21) ...... by none other than Sir Stirling Moss himself!  Cool!  What a find!
http://baurspotting.blogspot.com/2012/08/stirling-moss-reviews-bmw-tc1-baur.html

Two days later, I discovered that the Lime Rock Historics Weekend was featuring a guest appearance by Sir Moss!  I couldn't believe it!  Wouldn't it be great if Baurspotting could meet the Great Man, and get his autograph on the very article that he wrote about the BMW Baur!  What a coup!
(That is coup, not coupe, for all you gearheads out there.  Yes, it IS a word, not a misspelling!)    ;)

So, I was determined to do just that, i.e., get his autograph on the article that he wrote more than 30 years ago---- about my favorite daily driver car!  Hence, the 'raison d'etre' for my presence at Lime Rock on that fateful Sunday, September 2, 2012.

So.... the table is almost set.  I am at Lime Rock, complete with pseudo-journalist trappings.  Over the public address system I hear the announcement of Sir Stirling Moss' presence on the field.  How will this unfold?  Will Baurspotting successfully complete the Quest?

In the meantime.... here is a link to give you an idea of what sorts of things were going on at Lime Rock this weekend:
http://www.sportscardigest.com/lime-rock-historic-festival-2012-report-and-photos/