This is just a Special Treat.... I was very surprised to see a 1952 Vincent on the field at Lime Rock.  Very Pleasantly surprised, I should say, since I have never seen one before!  I only know about it from the famous Richard Thompson song.  Check out the Richard Thompson video "'52 Vincent" at the end of this post... it is worth it.

Vincent power land speed record holderRollie Free featured in one of the most iconic photographs in motorcycling history. 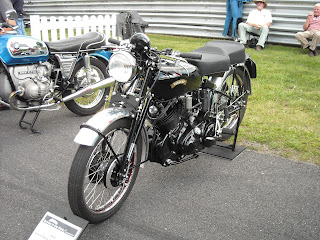 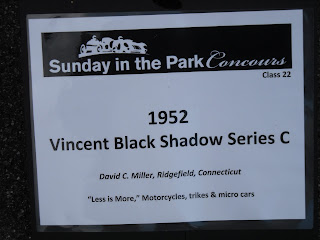 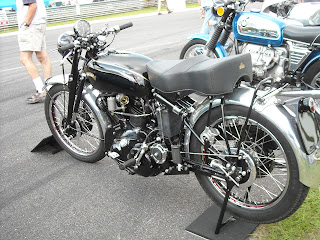 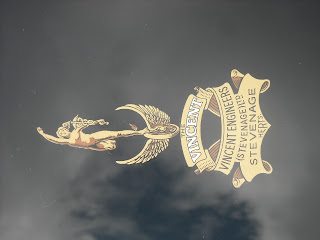 Vincent Black Lightning from 1950 at theZweirad-Museum Neckarsulm
The 1948 Series C Rapide differed from the Series B in having "Girdraulic" front forks – which were girder forks with hydraulic damping.[9]By 1950, the Series C featured a 998cc, 50-degree V-twin that put out between 45 and 55 horsepower, depending on the state of tune (Rapide or Black Shadow).[10]
The Black Shadow, capable of 125 mph (201 km/h), and easily recognised by its black engine and gearbox unit, and large 150 mph (240 km/h) speedometer, was introduced. The engine produced 54 bhp (40 kW) @ 5700 rpm in Black Shadow trim.
The Black Lightning was a racing version of the Black Shadow; every necessary steel part on it that could be was remade in aluminium, and anything not essential was removed altogether. These changes helped reduce the weight from 458 lb (208 kg) to 380 lb (170 kg). Every bit the racer, it had a single racing seat and rear-set footrests.
The 500 cc Meteor and Comet singles were introduced, along with a 500 cc racer, the Vincent Grey Flash. The Grey Flash racer used Albion gears, for the greater choice of ratios available.[11] The 500 cc bikes used a wet multiplate clutch, while the 998 cc V-twins used a dry, drum-type servo clutch.
Most Vincents were painted black. In 1949 a White Shadow (a machine to Black Shadow mechanical specification, with the Rapide colour scheme) was available, but only 15 were sold, and the option was dropped in 1952. In 1950 16 Red Comets were shipped to the United States. There were also 31 of the 1948 Grey Flash built.[12]
From 1949 HRD was dropped from the name, and the logo now simply read "Vincent".


http://www.youtube.com/watch?v=j0kJdrfzjAg&feature=related
Definitely check out this video.  Trust me on this.  I love this guy, and I love this song.