The Great Baur Awakening Begins: Our Baurs Hit the Media!

UPDATE AGAIN:  THEPOOLEMAN has sent me this link to an article that appeared in October 2010 about one of our own members 'msbehmane36' from E21 bimmerforums.
http://www.eurotuner.com/techarticles/eurp_1011_notchback_vr6_baur_power_034_gold_v6/
Scroll down to see the piece about Mike B's Baur project.
Here is a post we did on our visit with Mike and his dad, scott, last year after Bimmerfest East:
http://baurspotting.blogspot.com/2011/08/baurquest-i-project-baur-in-pa.html


UPDATE:  "ANONYMOUS' has reminded me tonight of another major article featuring a Baur:  Roundel November 2009 did a cover story on a TC2  (E30) Baur that was also featured on the cover.  Baurspotting did a little write up that car when it was posted here:
http://baurspotting.blogspot.com/2011/05/just-car-guy-blog-baur-tc2-m.html

The November 2009 Roundel article is available on line, at least to subscribers.  The article is titled: "RARA AVIS".  Curiously enough, that just happens to be the title of our E30 bimmerforums thread about the TC2 Baur..... although we titled it in English rather than Latin!   (Rara avis is latin for "rare bird'. Don't ask how I know this.)
Baur Plate number for this car is:  B 2863!
;)
To read the original article, try this link:
http://roundel.imirus.com/Mpowered/book/vrds12/i1/p1
The article is in the November 2009 issue of Roundel.


We have just heard that another Baur has made it into the pages of a national magazine!

Bimmerforums member BMWtyro (Jeff D.)  informs us that his car will be in the September 2012 issue of Hemming Sports Car and Exotics Magazine, in the "My Car and Me" column on page 62. Congrats to Jeff!  We will be looking to pick up a copy of that! 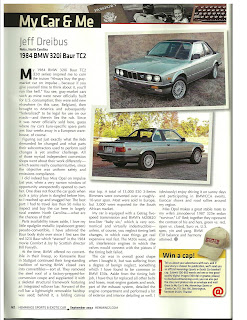 Jeff D. just sent me a copy of the article!  Thanks, Jeff, and congrats!!

This is the second Baur to be featured in a national magazine in the last couple of months.  The August issue of Bimmer Magazine featured a sizable article on Koko Manouelian's beautiful E21 Baur.  That should still be on the newsstands, so check it out.  I tried to post it below.... with, shall we say.... limited success, to be kind.  But you can see that it is a feature article!
"Family affair: Koko's E21 Baur TC1

It's a familiar tale - kid gets car, restores it himself - but with a twist, because the whole Manouelian clan helped with the resurrection of Koko's beautiful Baur." 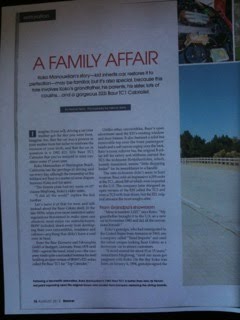 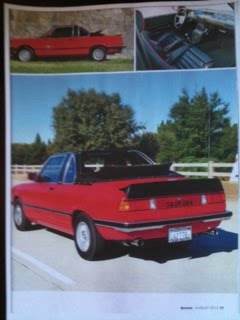 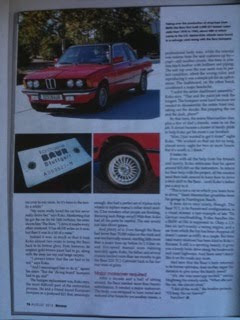 And we are in debt, once again, to THEPOOLEMAN for sending this link to Eurotuner Magazine recently, which features a Baur that was spotted at Bimmerfest 2009:

Congrats to Koko and Jeff, and a big thank you to THEPOOLEMAN!

Thanks to Carl Nelson and --- I gotta say it---- Katy Perry, this may be one of the most famous, if not THE most famous Baur cabriolets in the world.

Same one in this Katy Perry video (picture from LaJolla Ind. website) 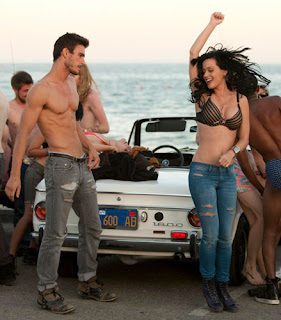 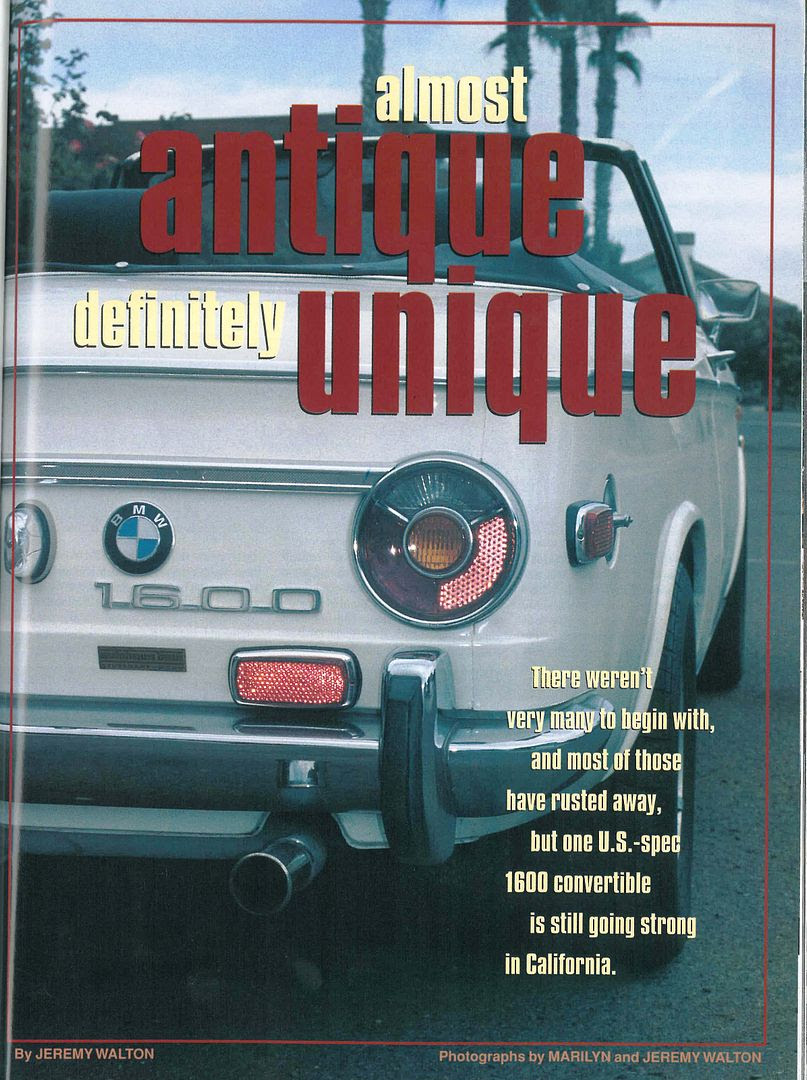 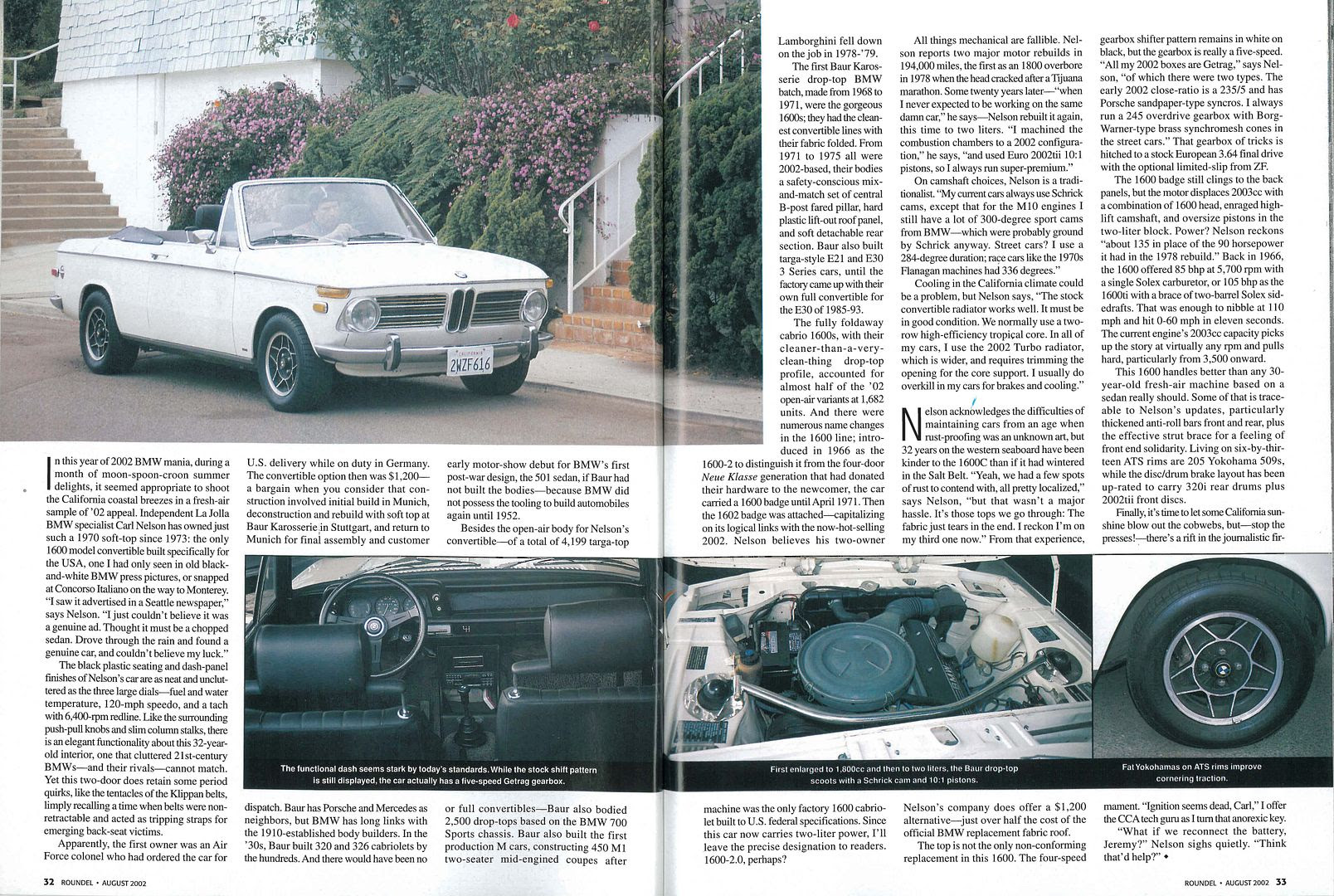 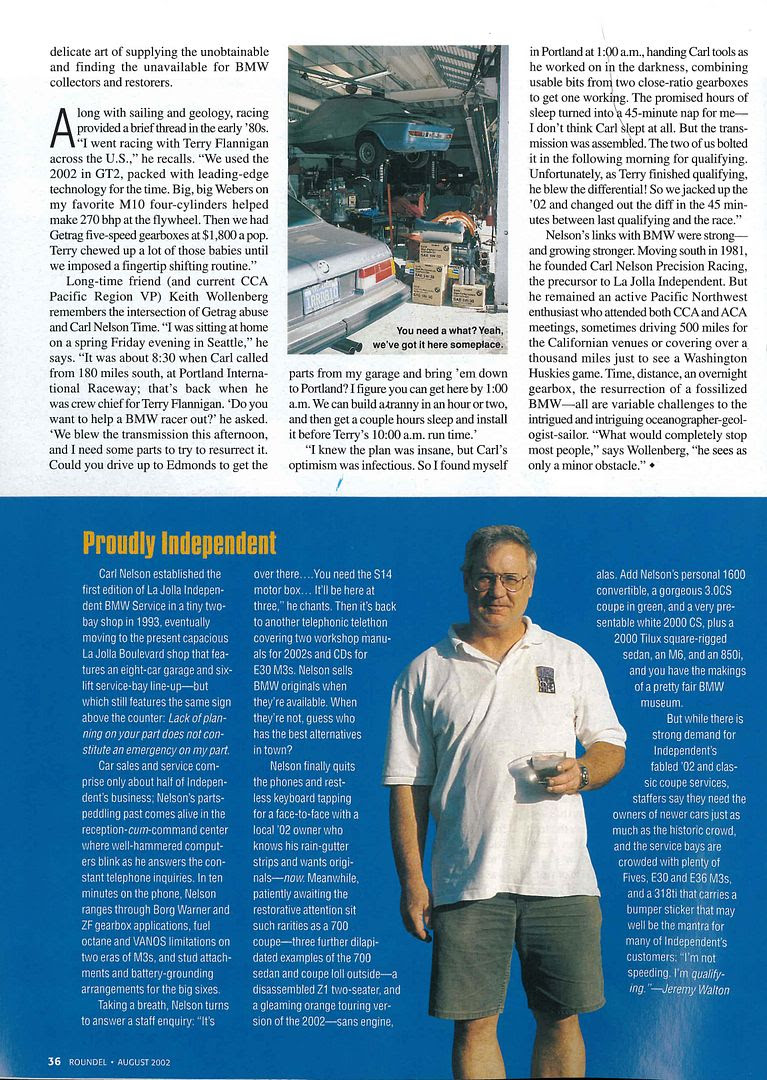 New Addition:  HarryPR's E1 Baur was featured in.... well here I wlll let my friend Harry hinself tell the story:
A few months ago I was contacted by BMW Headquarters in Germany. They wanted to feature my "patina'd" 1981 Baur 320/6 on their IPad version of BMW Magazine. After communicating back and forth via email, sending a few pics taken by my son Harry, and a video interview via Skype, it's finally online!

There ya go!  Enjoy!

Combine all of the above with the record-setting Baur showing at the BMW Vintage at Saratoga last weekend, and ..... it starts to look like ..... something is happening here!

It is the Great Baur Awakening!

Stay tuned, folks!  We are just getting started!

*http://www.youtube.com/watch?v=EpatC8sR-KU&feature=related
I believe that is the famous 1966 tour where he is accompanied by The Hawks, later known as The Band!  I actually attended a concert on that tour at The Bushnell  in Hartford CT.

UPDATE:  Thanks to 1972_Targa for reminding me of this video which was also an example of BMW Baurs in the media:
http://www.youtube.com/watch?v=awKDRZAXJTw&feature=relmfu

A commercial for Chloe perfume!