Huge thank you to THEPOOLEMAN  for sending me the link to this video: 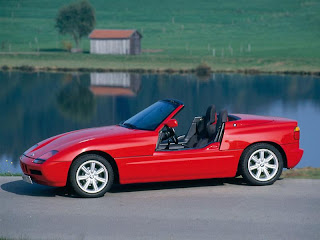 Why have I posted it here?

Note the similarities to the BMW Baur TC3.  The BMW Z1, and TC3 were basically aimed at the same market.  The TC3 was only produced as a prototype (a one-off).  BMW was also producing its own E30 full cabriolet.  Thousands of E30 cabriolets were produced;  about 800 Z1s were produced;  there is only one prototype for the TC3.  C'est la guerre.  :)

Here is another video of the door operation that we shot at the vintage at Saratoga on July 14, 2012 for your enjoyment:
http://baurspotting.blogspot.com/2012/07/vintage-at-saratoga-z1-disappearing.html

The BAUR TC3 was developed in collaboration with Mr. Eberhard Schulz (Isdera) designed and developed. It is based on a tubular space frame technology and E30 325i engine that sits somewhat positioned further back in the engine compartment. Thus, the TC3 also space for an eight-cylinder or even a twelve-cylinder engine also, or even as an M1 aggregate. With a drag coefficient below 0.3 Sun speeds up to 300 km / h range are possible. With the standard 325i engine was the top speed around 240 km / h
BAUR planned the TC3 to utilize vacant production capacities and employees against dismissal otherwise threatening to preserve, as the sales figures of the TC2 due to the launch of the BMW E30-Fully Convertible (factory convertible) were significantly decreased. However, pursuing this idea BAUR without involvement of BMW in Munich. There has been developed in parallel to the Z1 TC3 and brought to market - so there was a pattern of TC3 cars, which were later removed and the first built-kidney BMW and the BMW emblems.

An article on the BAUR TC3:

And I suppose I may as well include this scoop:
http://www.worldcarfans.com/110041225608/bmw-z2-prototype-first-sighting-in-laguna-beach-california

You dont get this stuff anywhere else, folks!