Readers may recall that Baurspotting attended the local Ocean Beach cruise night a few weeks ago, and the star of the show was this Detroit Diesel Rat Rod: 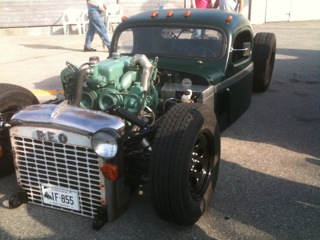 My only regret was that I didnt get to see it run.  And I posted the following:
"So I make a solemn vow, here and now:  I will make it my mission to find this truck again, and get VIDEO of him starting it up, lifting the chassis, and driving away.  Personally, I can't WAIT to see this myself!  :)  So if I get to see it, I promise to share it here with you guys! "
http://baurspotting.blogspot.com/2012/06/ocean-beach-cruise-night-june-11-2012.html

OK, boys and girls.... I am here to make good on that promise tonight.  Although I hadn't been planning on attending the Ocean Beach Cruise this week, Monday was such a gorgeous day that I decided to go at the last minute.  Nice days usually bring a good turnout, and I had hopes of seeing the Diesel rod again.

My effort was rewarded when, shortly after I arrived, I spotted the Detroit Diesel again!  This time I was determined that I would capture the beast running on video, so, after chatting with Mike, the owner and builder for a few minutes, I returned to my car to retrieve my camp chair, some reading material, and my bottle of water.  I set up 'camp'  a little distance behind the rod with the firm intention of going nowhere until I saw him start that Detroit diesel and drive away.

There was, by this time, a pretty good turnout of cars and spectators at the beach.  As you might expect, no one could pass by this rod without stopping for a closer look.  It was constantly surrounded with 5 or 10 people of all ages, sizes, shapes, colors and genders.....  absolutely fascinated by what they saw.  This car is a magnet, the great equalizer:  I challenge anyone with a passing interest in cars, or mechanics, or art----- forget it, anyone with a PULSE!----- to walk by this car without pausing for a closer look.  It just can't be done!  I further guarantee that this little rod will put a smile on your face.

There is so much that is fascinating about the little vehicle... no matter where you look:  a three cylinder Detroit Diesel, a chopped cab; a huge Reo grill; a six inch exhaust stack;  a stick shift that nearly touches the roof of the cab;  a converted fire extinguisher air tank;  air bags to lift the chassis off the ground.... and the list goes on and on.  Did I mention that the whole chassis is sitting flat on the ground? 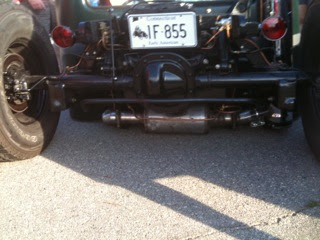 By now, you may have figured out that I love this little rod.  I spent a few more minutes speaking with Mike, the owner, as the evening went on and I learned some fascinating stuff:  the 3 cylinder Detroit  diesel is the pumper from a fire engine that was being scrapped in the Providence, RI area; 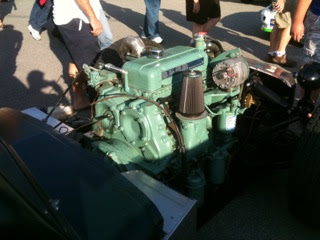 the 6 inch stack is from a Peterbilt facing the same fate; 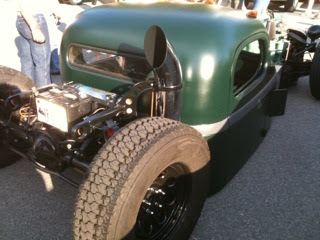 He mated the engine to a bell housing from a 1960 Ford;  the 5 speed tranny is from a Mustang, or maybe a Chevrolet, he wasnt sure;  the grill and the cab are from the same Reo tractor.... but you get the picture.  The little rod has been cobbled together on a bare bones budget, an amalgamation of... an unknown number of vehicles.   It's brilliant! 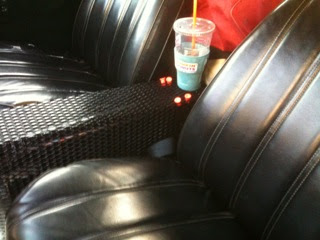 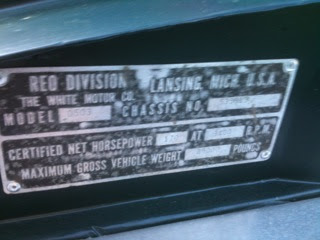 The REO plate on the cab.

"Just dumb luck that the front end even works" Mike said, at one point.    I think not.  Mike, btw, is a very accessible, easy going guy, quite willing to chat about his little creation, and very self-deprecating in terms of down playing the amount of time, money and labor that created this car.  He makes it sound as though  this is what happens when you have too much time on your hands!
As if he was just looking for something to do with a few buddies, having a couple of beers and....,  this is the result!

I will go a little further: this is flat out a brilliant combination of hard work, well thought-out mechanics, and yes, a bit of whimsy.  I love it!

Let's face it, folks:  this is the stuff of genius!  Brilliant!  Kudos, Mike!

And not only that.... it frickin' WORKS!
Ok.... without further ado.... here is the video I shot with a low battery on my iPhone.
http://www.youtube.com/watch?v=Nm_EdTO92h0
Unfortunately the battery died as he drove away... so I didn't get that.

This project deserves a major magazine write up, and/or a feature on one of the TV car shows.  It is that good! Sam Smith just got appointed executive editor of Road and Track. Are you out there, Sam?  I know this isnt R&T's cup of tea, particularly, but..... this story needs to be told!
http://baurspotting.blogspot.com/2012/01/damn-torpedoes-full-steam-ahead.html
Posted by tom82baur at 8:40 AM