This has got to be one of the most desirable, if not THE most desirable, Baurs in the world!  Baurspotting's hat is off to the beautiful job that the inestimable Ron Perry has done with this Baur.   It is just gorgeous. 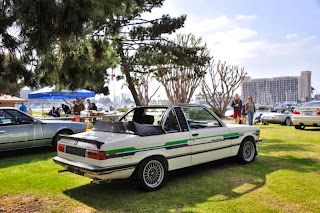 OK, so much for full disclosure.  Other than the above, I am a completely objective, cold-blooded 'killah' when it comes to evaluating this car.  Did I mention that I love it?

Just buy the damn thing.  You are gonna love it!  This is one of 90 E21 Baurs that we have found in the US.  It is arguably the BEST one.  One of the rarest BMWs in the US, restored by Ron Perry. Yeah, Ron Perry!  The Baur Top Cabriolet styling is a unique historical artifact:  it tells a story.  An E30 Baur has just been added to the one of the largest Automobile Museum Car Collections in the United States.

Its rare.
It was restored to a VERY high standard by Ron Perry.
It is an historical artifact, a car whose unique styling was in direct response to an historical phenomenon:  an anticipated ban by many governments, including the US, on convertibles due to a perceived safety risk.  Hence, the Baurs have a built-in roll bar.
It is a convertible, an EXTREMELY rare bird in 1979.  You can look it up!
It is a flat-out blast to drive.
I do believe that it is destined to become a collectible.

I bought this car in February of this year as a rolling shell. Originally a 320/6 it came with four wheels and a really nice paint job. I had a blank canvas with a really low mileage car. My first thought was to but an M30B35 in it, but received a call from a good friend that was selling his e28 with a 2.7 stroker motor in it and decided since he only had about 5k miles on it, that it would be a great power plant for my project and I wouldn't have to re-invent the wheel. It took a bit to go from carbs to Motronic, but got away with a really clean job. We were even able to use the air box holder and welded it to the e21 chassis for a really clean look. The exhaust starts with Ireland Engineering headers to e28 down pipes, to an e21 323i center muffler and then all stock 323i pipes and mufflers (all NOS!). For the exterior, I purchased all NOS new tops and header, all new window rubber, and all new window trim (someone had attempted to fake shadowline the old stuff and just made a mess!)-not an easy job, either. Aftermarket Alpina Deko Set, aftermarket Alpina style front spoiler, and a Zender rear spoiler. All new NOS rubber was added to the soft top and hard top. Now on to the suspension...while the car was on the lift, I removed all of the suspension and sent the following to be powder coated: Front and rear sub frames, new Ireland sway bars (in red), swing arms, fuel tanks, strut housings. Everything was then re-assembled with all new bearings, struts, shocks, fresh cadium plated hardware. All driven to a 3:46 Limited Slip diff. I did use the original rack, but added new boots. Completely rebuilt half shafts too with all new bearings and cadium plated hardware. For the wheels and tires, I was able to source a set of Ronal Alpina wheels 6&7x15" with all new tires. For the interior, I used a set of Recaro front seats and covered both front and rear with aftermarket Alpina style cloth (please DO NOT ask me where to source this as I will not tell you). I found a correct dash and it had one tiny crack by the front windshield, so I had it sent out to be re-covered in leather. Sent out the instrument cluster to have the correct Alpina fonts and the needles painted. I also found a period correct center console with cassette holders! The rest of what was added, including fresh door panels and rear parcel shelf are all visible in the photos. The only thing I forgot to add was the rebuilt close ratio (dogleg) transmission which coupled with the motor and the rear end, makes this car just a kick in the pants to drive. I have not run the car on the dyno, but I also have a real e30 Alpina B6 2.8 with 218hp (rated) and this car is much quicker! This is like a new car from top to bottom and no expense was spared in the build!!!!