If Disney Pixar is thinking of making another sequel to CARS and CARS2, it appears BMW may be ready to join in the on-screen fun!

BMW Blog has just released some pics of a new 9 Series GT Concept Car, that looks perfectly suited to appear in a cartoon about cars! 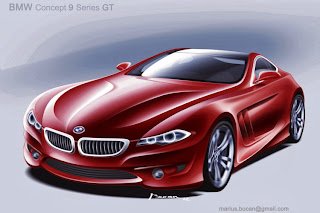 The BMW 9 Series GT is a concept meant to illustrate what a top BMW “Gran Turismo” might look like, a true competitor in the category of exclusive, two-seat coupes dominated by the Mercedes SLS, Aston Martin ONE77, as well as the Ferrari F12Berlinetta. This epitomizes an exclusive niche, in which consistency and prevalence are given by the prestige and performances intrinsically linked to the uniqueness and character brought by the “DNA” of the brand, in which experiments lacking sustainability do not fit.
Ideally sportiness should not exclude elegance as well as design styling should not filter elements of innovation. But rather a subtle way can create a vision in the brand’s design. Using these premises, the first sketches I created are not typical to a car

designer in the sense that from the very beginning I preferred a realistic approach to design. In the early creative stages, this approach can be itself a serious barrier to free imagination but the architectural formation was decisive to define the way of styling expression. Paying attention to proportions I tried to give personality to the concept with a dynamic sense discreetly accompanied by an exclusive touch.
The car’s silhouette is dominated by an elongated bonnet, which closes up a powerful 6 litersV12 engine, situated in the back of the front axle, connected to a gearbox in front of the back axle. The generous wheelbase, the short overhangs and the low driving position, provide the ideal mass distribution which favors excellent dynamic performances. From the profile, the impression of power is accentuated by the wheels with impressive 21″ wheels. The prominent passage line of the wheel arches wings are aerodynamically inspired by the details of the coupes from GT races.
The tense curves of the “bone line” give the car a subtle yet dynamics and forceful line. The sportiness and agility are also emphasized by the base of the side sills, downwardly splayed from back to front. Besides the functional aerodynamics role, the double-blade side expansion slots do bring a certain dramatic effect. That, together with the outline of the lateral windows frame, including the BMW “hofmeister knick” trademark, determine finally the character of this coupe.

The front-end develops around the unmistakable BMW kidney grille, slightly tilted upfront in a shark style traditional to the brand. The bold look is completed by the well-known headlights with sharp edged details and opening slots which make one think of procrastinated aggression. In the same manner, the lower area has the central grid surrounded by daytime running lights, combined with the air intakes for brakes cooling. The design of the bonnet relies on the language applied by BMW to most of their latest models. The lines running from the front wheel wings to the engine continue with down the front A-pillars. Together with roof line and the C-pillars at the rear, they form a unitary design, becoming one with the car allure. The relative narrow rear windscreen, the see-through spherical roof and the very tilted front windscreen form a homogeneous, stained glass- like surface which once again accentuates the aerodynamic profile of the coupe.
The width of the rear are emphasized by the horizontal line of the narrow back lights, bearing the trademark L- shape design, integrated as LED bulbs which, while driving, give the impression of incandescent metal. The short trunk, aerodynamically designed closes up the volume of this concept in a sporty style.
All throughout the creation and design stages I have sought to produce strong features, without unnecessary exaggerations. Although the design can described as sensual, the overall package is inspired by BMW and German engineering. Think about the timeless look of the 60s coupes (Ferrari Daytona or the original Maserati Ghibli), whose appeal will always fascinate everyone. I’m searching to achieve a perfect balance between innovation and styling with not just a sportiness approach but also an elegant driving presence. It’s about the passion combined with classical BMW proportions in a postmodernist shape.

The design is mainly about energy and in this case the sensation given by a summer stormy rain which served also as an inspiration for those sketches. I uploaded an inspirational slideshow with a superb soundtrack single “Rain” by MARA from “In Love with Love” album (available atwww.kultstudio.ro) whom I want to thank in this way again for her kindness to accompany the concept with her wonderful voice. 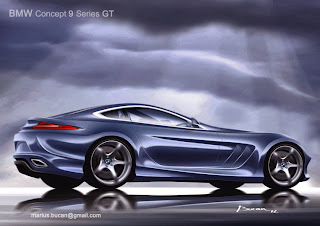