The Saratoga Automobile Museum is featuring two BMW M1 Art Cars by Baur this season.  We have featured that fact several times in our posts here on Baurspotting.

Well, the Burning Man Festival is known for attracting Art Cars, so we thought you might like to see some of what else is out there. 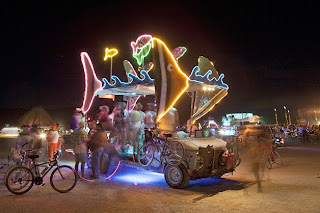 Thanks to my friend Tom S. in SC for sending me this link!  Thanks, Tom!

What is Burning Man?
http://www.burningman.com/whatisburningman/about_burningman/experience.html

Here are the BMW M1 Art Cars in Saratoga:  by Andy Warhol and Frank Stella.

More on the Art Cars of Burning Man:

photo by Harrod Blank
In 1995 I attended my first Burning Man, where one of the most surreal spectacles I witnessed was a large silver shark racing across the playa with teeth bared and tail flapping. This was Ripper the Shark, an art car made by Texas artist Tom Kennedy. Ripper and Tom resided at Art Car Camp, where I found myself spending afternoons chatting with the art car artists and helping to paint a car. The fledgling art car camp began a tradition on the playa, and in 2001, the camp, managed by art car czar Harrod Blank, swelled to 25 cars from Washington, Oregon, California, Arizona, Nevada, New Mexico, and Texas. Harrod is the creator of the Camera Van.
In addition to painted, decorated, and altered cars, the ranks of art vehicles on the playa have grown to include firetrucks, buses, bicycles, scooters, motorcycles, golf carts, and all manner of wheeled, mobile objects which serve as transport of some kind. One sees boats, pirate ships, rockets, living rooms, fish, ponies, insects, cats, couches, lobsters, giant heads, and flying saucers, among others. The perfectly flat and empty playa serves as a wonderful setting for the art cars, and the occasional art car parade is greatly enjoyed by participants. Because they are the only vehicles allowed to be driven on the playa, they are proliferating, but certain criteria must be met. Gluing a few tchotchkes on your car or covering it in glo-sticks does not an art car make. Your car must be approved by our Department of Mutant Vehicles and you must have a DMV sticker in order to drive it. Learn more about art vehicles on the playa.
See the art car images in our Image Gallery.

photo by Harrod Blank
Art Cars and Burning Man
by Harrod Blank
Normally art cars are on the fringe and considered alternative and kooky. At Burning Man, however, art cars suddenly become cool, and more, they are integrated into the community and celebrated as part of the event's identity. The art car artist is thus made to feel more like a hero than a freak, a part of the inside instead of on the outside.
Ever since 1994 I have attended the event in my art car "Oh My God!" and helped to organize the art car theme camp. Moved so much by the new imagery and cutting edge art, I embarked upon making a documentary film on 16mm. I am still working on it today focusing on this creative energy that brings us altogether. Certainly many people are attracted to the nudity and the fire and the overall spectacle of the event, and granted, I too revel in it all — but what really gives me a charge is the fresh, challenging, dynamic, and contemporary public art. Burning Man to me is like a giant adult rated show n' tell, a smorgasbord of art, identity, and passion of which the art cars are a big part. Granted I am coming from a very artcar-centric point of view, but in my opinion art cars are symbols of the spirit of individuality and freedom which is what draws people to the event in the first place. The real difference between the art cars and Burning Man is that once the man is burned and everyone goes home, the art cars continue to carry the torch year round... and against the flow of traffic!

Harrod Blank in his first car "Oh My God!"
Photo by LadyBee
As long as the art cars have the right to be driven, to be mobile and given life, they will in turn give life to the event regardless of its size and location. It may not be apparent to the average viewer, but the art cars help to flip the definition of our sense of community and our values by placing artistic expression more at the top of the totem pole and manufactured unoriginal consumer images (cars) at the bottom where they belong. If only real life was like Burning Man in which only art cars were given permits to drive!
See Harrod's Burning Man images at www.harrodblank.com.
Learn more about art cars at www.artcaragency.com.