I know it must seem to some folks that I am shamelessly flogging this event..... and they are RIGHT! 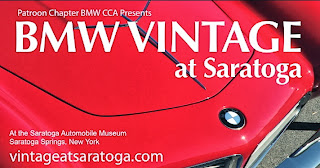 I am re-posting this message from Neil_FjordBlue that appeared in the Nor'East '02ers forum a few days ago.  Thanks also to Scott S. for the link and the reminder.

See you there!  Let's get those Baurs out there for this great event!


In all the reservations and arrangements, I wanted to make sure no one missed the real once in a decade BMW exhibit at the Saratoga Museum:From May 6, 2013 to November 3, 2013, the Saratoga Automobile Museum will focus on “BMW, the Ultimate Driving Machine.” We’ll present a seven-month major exhibition of significant BMW cars and motorcycles from the 1930s to the present. The Bavarian Motor Works began as a motorcycle producer, segued into automobiles, and remains one of the few marques you’ll find competing successfully on both two and four wheels. (Know the other two? It’s Honda, of course, and VW Group, who recently acquired Ducati.) Historic BMWs on display will range from the sporty pre-War 328 roadster – one of the most successful competitors of its day - to the supremely elegant postwar 507, the winged CSL of the 1970s, noted BMW racecars and much more. BMW Classic is anticipated to provide cars from the BMW Museum in Munich and the BMWNA Collection. The 2 wheeled BMW’s are complements of the Nettesheim Museum in Huntington, NY. Ranging from the first R32, R62, an R12 and many more. You won’t want to miss this exhibit.BMW Automobiles on Display: 1935 315/11937 328 MM "Bugelfalte" Roadster1938 328 Roadster1957 507 Roadster1957 Isetta 300BMW 2002 tiiAndy Warhol M1 Art CarBMW 3.0 CSM5 SupercarM3 GT3Z1 Roadster
http://www.bmw2002.us/index.php/component/kunena/7-events/715-october-12-13-vintage-at-saratoga?Itemid=0
Posted by tom82baur at 10:48 AM