The BMW M1 Art Car by Andy Warhol arrives at the Saratoga auto Museum for the 7 month BMW exhibit! 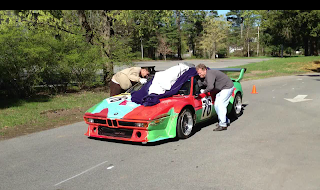 The M1 was built by Baur, folks!

"From May 6, 2013 to November 3, 2013, the Saratoga Automobile Museum will focus on “BMW, the Ultimate Driving Machine.” We’ll present a seven-month major exhibition of significant BMW cars and motorcycles from the 1930s to the present. The Bavarian Motor Works began as a motorcycle producer, segued into automobiles, and remains one of the few marques you’ll find competing successfully on both two and four wheels. (Know the other two?  It’s Honda, of course, and VW Group, who recently acquired Ducati.)
Historic BMWs on display will range from the sporty pre-War 328 roadster – one of the most successful competitors of its day - to the supremely elegant postwar 507, the winged CSL of the 1970s, noted BMW racecars and much more. BMW Classic is anticipated to provide cars from the BMW Museum in Munich and the BMWNA Collection.
The 2 wheeled BMW’s are complements of the Nettesheim Museum in Huntington, NY. Ranging from the first R32, R62, an R12 and many more. You won’t want to miss this exhibit."