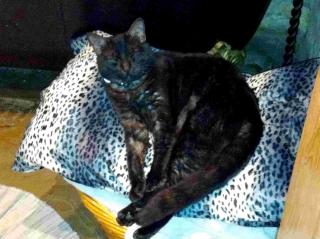 Classic BMW gets smashed with a cat on board!

Mr Boots is home - minus a couple of feline lives

Mr Boots is now safely back home after being found in Four Marks
CATS are supposed to have nine lives, and one of them, Mr Boots, has used one if not two of them.
Not only was he involved in a car crash last month (July) but then went missing for three weeks.
He is now safely home, much to the delight of owners Jon Furley and Ruth David.
They were travelling in a 1972 classic BMW when they were involved in a collision on the A31 at Four Marks on Tuesday, July 12.
Mr Boots was in the car and was hurled from his basket by the impact and escaped through a broken window.
After receiving hospital treatment, his owners started a wide scale search for him and put an appeal in the Chronicle.
The breakthrough came on Saturday (July 30) when he was spotted by Jan Hawke of Telegraph Lane, Four Marks.
They came to look for Mr Boots and found him within the hour, and took him home to Paper Mill Lane, Alton.
They said: “He's skinnier, very dusty and skittish, as to be expected, but very hungry and thirsty!”
They added: “We would like to say a big thank you to everyone who has called with possible sightings. We have got to know the local black cat population quite well!”
Mr Boots, minus a couple of lives, is now recovering at home.