A Blast From the Past!? 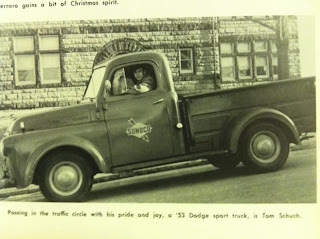 You may recall the pic above.... that is me at 17 years old in my 1953 Dodge truck on my high school campus, circa 1967.  I have posted in here before, and in Facebook.  The brownstone building behind me is now a courthouse, btw.

Today, a local building official told me that there were two blue 1953 Dodge trucks rusting in the woods behind a local Sunoco station.  My truck was blue.  My dad owned a Sunoco station about 8 miles away.  That is a Sunoco decal on the driver's door of my truck.   I decided to go take a look at the trucks after work.

The three pics below are pics of the OTHER truck I found in the woods today. 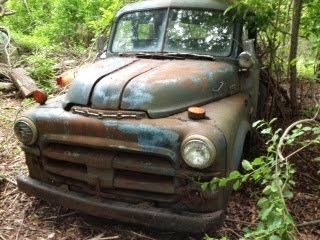 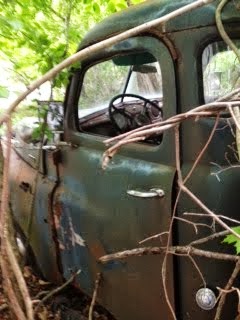 3) Now look at the decal I found on the driver's door.  Whoa.  That is definitely a Sunoco decal!  OMG. 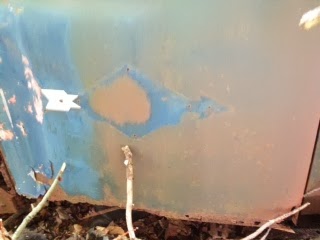 Can there be TWO 1953 blue Dodge trucks with three on the tree and a step starter with a frickin Sunoco decal on the drivers door, and ONLY on the driver's door in BOTH cases????

This truck in the woods is the same color, the same year, the same engine and drive train (3 on the tree, straight six engine), similar locking gas cap, similar Sunoco decal on the driver's door.... and I found it about 8 miles away from where my Dad's Sunoco station was located.

Alas, I have decided that it is nothing more than a very strange coincidence, based on the following:  1) that Sunoco decal, while similar, does not match the decal that was on my truck;  2) the most conclusive evidence however is this: 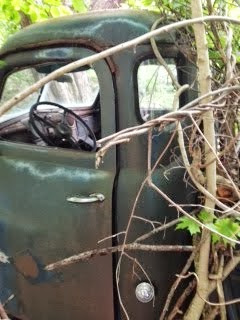 Check the configuration of windows in the back of the cab.  this truck in the woods has three rear windows:  one in the center, and one on each corner.  You can see one just to the right of the door in this pic. 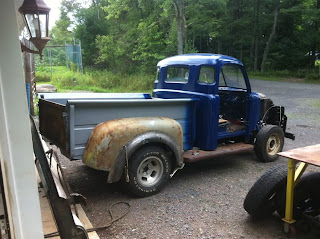 To see what I am talking about a little more clearly, compare the 3 rear windows in the truck above with the single window in the truck pictured below. 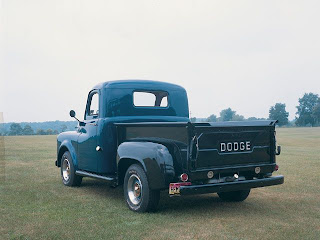 This truck most closely resembles the truck I had back in 1967.  Strangely enough, the blue in both of these trucks is very close to the Blue Sunoco of my truck.

So, thus ended my excitement over possibly rediscovering my beloved 1953 Dodge 'Sport' truck.  Close, but no cigar.   Two sunoco gas stations within 8 miles of each other BOTH had blue 1953 Dodge trucks with locking gas caps and a single Sunoco decal on the driver's door.  What are the chances of THAT!!  And... what are the chances that I would find one of them 46 years later by pure happenstance:  by having a casual 'car guy 'chat with the local building official!

Although I am a little disappointed at the final outcome, I must say that it was quite fun and exciting while it lasted.  This has whetted my appetite for this truck, I must admit.  So I think I may keep looking.  Hey, you never know.