Another 'Small Baur World' Triumph at The Vintage at the Vineyards!

You may recognize this pic.  We posted yesterday in this post:  http://baurspotting.blogspot.com/2013/05/report-from-front-part-iii-400-pics.html 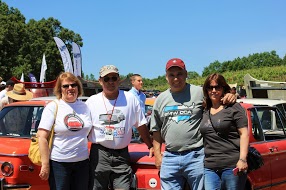 So..... this afternoon I get the following email from Mike P..... who we did correctly identify in the pic.  (BTW, in my defense ....  I correspond with many great people here on Baurspotting, but I have only had the privilege of meeting a few in person.  Ed THEPOOLEMAN, for one.  I have never met Jeff and Dawn, nor Mike and Eileen. At least not yet.  I do look forward to doing exactly that in the coming years.)
Anyway, I received the following email from Mike P. a little while ago:

The other couple in this picture is Amandio and Natalie (They live in Massachusetts).   Amandio came up to me at the Vintage and told me he had imported an 02 Baur from France last summer and when he went to pick it up in Baltimore our cars were side by side.  Turns out they came over on the same boat!!!!   Theirs is a 75    Boy did we have great fun talking about that!!!

It was nice meeting Ed and the other Baur folks

Hope you can get down this way sometime

So, the two other folks in the pic, while they are NOT who we guessed they were.... but they are INDEED Baur Owners.  You may recall that Mike and Eileen's Baur came by ship from The Netherlands.  Amandio's Baur came over on the same boat at the same time..... to the Port of Baltimore MD..... and Amandio lives in MA---- and here they are together in a pic about one year later at the Vintage at the Vineyards in NC!

Well, folks you know we have posted a number of times about this being a "Small Baur World".... and there have been many serendipitous instances and coincidences that uncannily seem to involve the same small number of Baurs.

Here is another textbook example!  In addition to the amazing coincidence described above..... there is more!

Last October, my son Brian and I attended the Bav Auto Show and Shine in Portsmouth NH.  We hung out that day with our friend Ed THEPOOLEMAN---- the same photographer who took the pic of Mike and Eileen above.  We all spent some time that day talking with a fellow Baur owner from MA who told us the story of bringing in his Baur from Europe by ship to Baltimore..... and his surprise at finding that there was ANOTHER Baur on the boat to the US with his!!

I had forgotten all about this conversation..... until I got Mike's email today!  The Baur owner that we chatted with at Bav Auto in NH last October is the very SAME fella in the pic with Mike and Eileen 840 miles away  in NC yesterday!  And the Baur that was on the Boat from Europe with his was Mike and Eileen's Baur!  Too funny!!!  You can't make this stuff up! I love it!

It is a Small Baur World indeed!  Welcome to Amandio and Nathalie!   :)  And thank you to Mike for sharing that story!  And thanks to Ed for taking the pic that captured all of this!