More On The Smashed CSL Restoration in Budapest: The Chicane 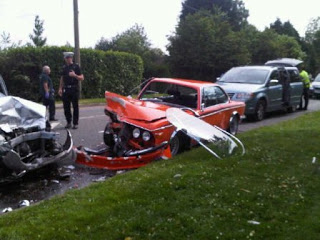 I found another article on the restoration project in CSL's Garage in Budapest, Hungary.

BREATHING LIFE BACK INTO A WRITTEN OFF BMW CSL

It’s never an encouraging thing when you encounter a photo like this one. This photo of a “written off” BMW CSL popped up this morning on Bring A Trailer’s Facebook feed. I remember seeing this photo last fall shortly after a driver fell asleep at the wheel and careened into Jon Furley’s 1972 BMW 3.0 CSL. The loss of a CSL is a bad thing.

Any CSL is rare, but this is one of only 500 RHD models made. That sounds bad, right? But Furley’s example is a damn-sight rarer, as her original owner was Chris Amon. This CSL was Amon’s street car during the era when he raced the Batmobile BMWs. Noooo!

So, what has happened in the year since the crash? I’d assumed that this one was stripped of her valuable bits and given a tearful good bye. Thankfully that’s not the case. A very brave team has decided that she must live again. After all, what’s one lost corner between friends?

This album on CSI Garage’s Facebook shows that her restoration has begun this past November. Looks like they’ve welded in a replacement front end, rebuilt part of the frame, and pulled and assessed the engine (which was relatively unscathed with only a broken timing case cover and cylinder head cover).

There’s something infectious about the optimism in the vintage sports and racing car community that I love. Insurance adjusters look at this and call her a write off. A random person off the street looks at it and calls it scrap. Hell, most “car guys” would see these photos and say it’s beyond saving. A good restoration workshop looks at this and says, “Yeah, we can do that.” This is not a project for the weak of heart and I’m looking forward to their continued updates—though perhaps not as much as Jon.
Also see this thread on PowerFanatics for many more photos of the teardown. More good news, the family cat that went missing after the crash made it home. Ok, now I’m going from concerned sports car nerd and entering weird internet stalker territory.