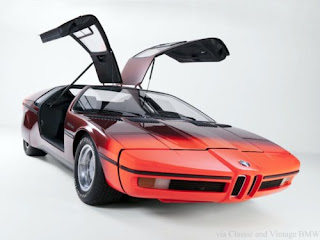 One of the greatest cars in the vast BMW stable is the 1972 Turbo concept which was created for the 1972 Summer Olympic Games in Munich, Germany. For the occasion, renowned designer Paul Bracq had created an innovative design for a BMW automobile, the BMW Turbo. The Turbo prototype was an extreme version of the M1 supercar. Similar to the M1, the Turbo had a very low profile, mid-mounted engine, and a long sloping nose. Only two Turbos were built. Today, it’s one of the rarest of BMW’s, with its elegant design, gullwing doors and futuristic cockpit. The Turbo was powered by a mid-mounted 4-cylinder 1990cc turbocharged engine with 280 hp at 5200 rpm and a top speed of 165mph. The interior was well detailed and included a safety steering system and a radar system to warn the driver of cars that might come too close. In addition, the very low center of gravity also made for an inherently safer design. The exterior had large window areas, a distinguished, sloping front and well balanced proportions throughout. The nose and the tail of the car were separate foam-filled pieces mounted on telescopic steel beams. These were intended to take most of the impact during a collision. Paul Bracq’s Turbo design had received universal acclaim and was named the ‘Concept Car of the Year’, in 1973, by the Revue Automobile Suisse. By 1979, the Turbo had evolved into the original M1, BMW’s first M Car.
1972 BMW Turbo Specifications We had it here in Baurspotting about a year ago, with some specs on the car.   Check this one out too!
http://baurspotting.blogspot.com/2012/04/1972-e25-bmw-turbo-prototype.html

UPDATE 6/4/2013: Thanks to Classic and Vintage BMW for posting this little addition to the 1972 Turbo Concept: 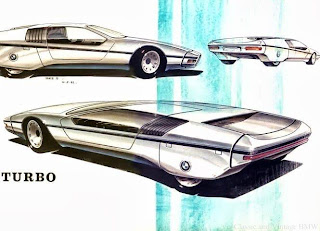