I know this isn't  a Baur article but..... we thought you might enjoy seeing this! 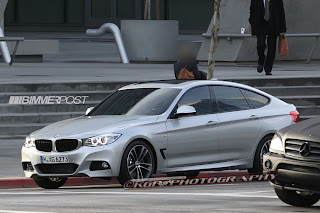 We Reveal the 2013 BMW 3 Series GT (Gran Turismo)!
298
REPLIES
Here are the first fully revealed 2013 BMW 3 Series Gran Turismo (GT) cars! These two 3 Series GT models, in two different trims, were just spied during a BMW video shoot.
The 3 Series GT shares a similar front fascia look to the F30 3 series sedan, and a tail end which, although still ungainly, is a slightly sportier improvement from the 5 Series GT [which we've compared with HERE].
Although the 3 Series GT (F34) shares a similar front end to the 3 Series sedan, design which it shares with the upcoming 4 Series Coupeis the front fender vent, which was recently spied on a production 4 Series Coupe (F32) model. The different finishes on the fender vents show us the vents on the F32 4 Series coupe should also differ depending on the trim level (i.e. black for M Sport models, satin aluminum for Modern Line).
The Silver GT is a M Sport model with the M Sport front bumper, sideskirts, and rear bumper/diffuser, and M Performance brakes. The wheels are 18" double-spoke style 397, but M Sport wheels will be available for selection. The Havana Metallic / Mojave Metallic GT is a Modern Line model with brushed/satin aluminum trim pieces.
The 3-Series GT is expected to arrive with the same engine offerings as the F30 3-Series sedan, including four and six cylinder petrol and diesel variants.
What is not yet known is if the GT will be offered in the US. If it does come to the US, expect the official reveal of the car around the time of the 2013 NAIAS in January, otherwise the 2013 Geneva show in March.
Here is a summary of the upcoming 3 Series / 4 Series lineup: