Bringin' It On Home...To My Driveway! 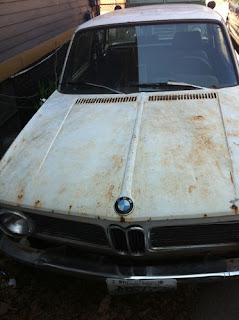 If you saw my post from November 16, 2012, you are already aware that I have made an addition to the fleet.  I bought an example of the car that, for me and for many others, I suspect, represents our first experience of the BMW marque, and the first time we ever fell in love with a car.  The iconic 2002.

Fast forward 38 years.... This is now my 11th BMW, and my first 2002.  It is a 1973 roundie, and it is a Project.  With a Capital P.  My role with this car is that of Preservationist:  stabilize it, get it running again, and preserve it for the future.    I have saved it from the boneyard, where it would have been picked apart by vultures.  It is not running presently, but the engine does spin freely and will fire a bit.  It just won't stay running.  The body looks pretty sad with lots of surface rust showing in the white paint.   Probably lots more rust under the surface.  I have found some rust holes in the floor pans and in the spare tire well.  The rockers and shock towers appear to be solid, at least at first glance.

The driver's seat is an E30 Recaro that looks like it's most recent occupant was a grizzly bear, and there is no back seat at all.  The passenger seat is also from an E30, I am told.

There is a box of miscellaneous parts, including, apparently, the driver's side window seals, which were removed for some reason.  Perhaps the owner was assessing the rust around the windows, I don't know. There are three or four extra tires and rims, some of which appear usable.

Here is the bottom line:  none of those problems matter to me.  What DOES matter is that the car is in my driveway, and I believe that there is nothing that can't be fixed.  I just got a welder for my birthday last month, and, if worse comes to worst, I have a variety of drive train combinations that can go right in this car, with minimal adaptation, I believe.  I even have a nearly complete interior from my E21 parts car for it!  So, damn the torpedoes!  Full steam ahead!

Here are the original pics from the eBay ad: 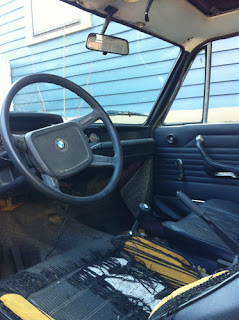 Interior.  I am told those are E30 front seats, including what is left of the driver's Recaro. 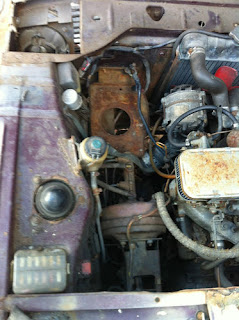 Engine compartment with an empty battery tray.  Notice that the paint under the hood is different  from the exterior of the car.  Hmmm. 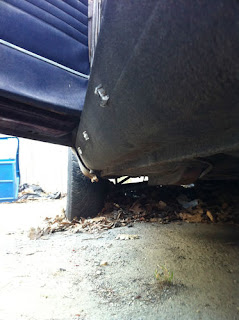 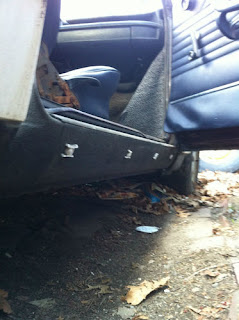 Appears to be a solid rocker on the passenger side also. 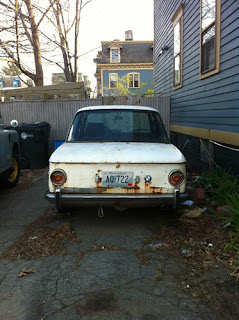 The pics above appeared in the original ebay ad.  I had contacted the seller during the auction with some questions, but, although I watched the auction end, I did not participate in the bidding.  I decided that I had enough cars for the moment, and I needed to let this one pass, painful as that was.  Especially since it went for $620.  Shoot.  The car sold in the ebay auction.  Or so I thought.

A few days later, I get an email from the seller, stating that his buyer was unable to complete the sale.  He asked if I still had any interest in the car.

Just when I thought I was in the clear.  It was hard enough resisting the temptation to bid in the auction, now he's got to dangle it right in front of my nose!  Sheesh!

Needless to say, I said yes.  Now I am in trouble.  I have to figure out a way to 'finesse' it past You-Know-Who!  This will be BMW #8, and even I have to acknowledge that this is getting a little out of hand.  :)  Try hiding 8 BMWs in a one car garage!  It ain't easy, trust me on that!

Anyway, after a few days of cogitating on it,---- OK it was a week---- I finally just blurted it out to her one day before work.  I made a preemptive promise to reduce the fleet by three, so that she would not even be aware of this new one.  I'm IN!  ;) 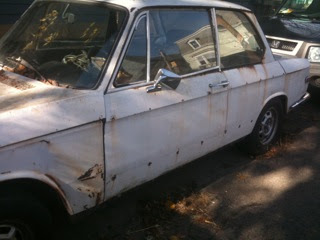 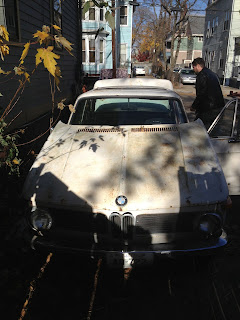 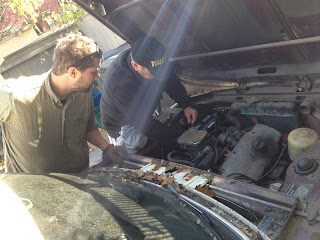 Tom (with Eric, the seller) installing a battery to try to get it started. 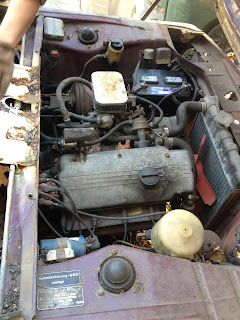 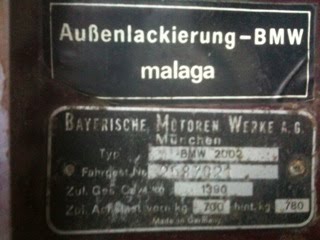 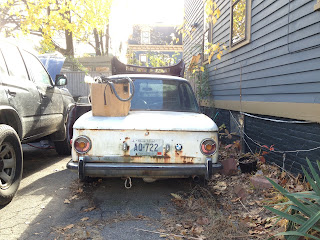 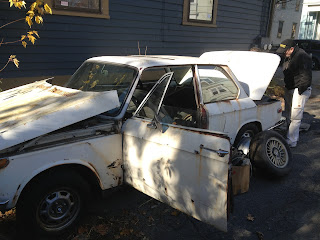 Checking the trunk for rust.  Surprise!   We found some.  Not as bad as expected though, in the spare tire well.   Shock towers appear solid.  Another surprise! 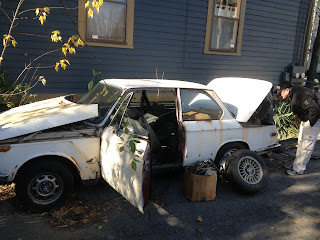 A set of E21 turbines thrown in to the deal, with a couple of new Yokohomas. 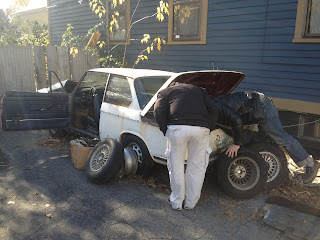 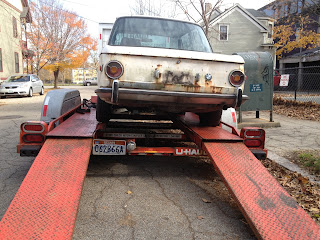 In our effort to push it up on the trailer, we narrowly averted a minor disaster.  We thought we had it going on pretty straight, but the wheels turned slightly as it went on, so that both left wheels ended up riding the very edge of ramp, as you can see in the pic above!  Yikes!  We had to very gingerly guide it back from the edge, then we pushed hard from the right side to slide it back into the middle.  Whew!  Another inch or so, and the left wheels would have dropped between the ramps!  What a disaster THAT would have been!!  Dodged a bullet on that one! 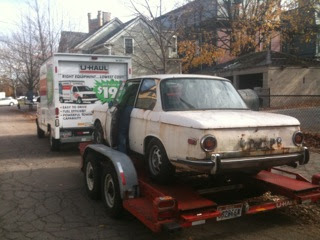 Now it is back on the ramps properly. 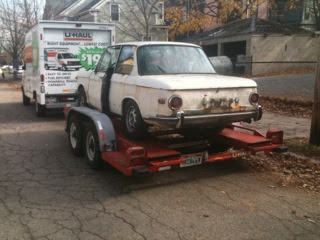 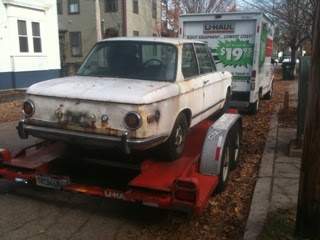 You can see how we shoved  it to the left away from the right hand edge.  Compare this to the problem pic above. 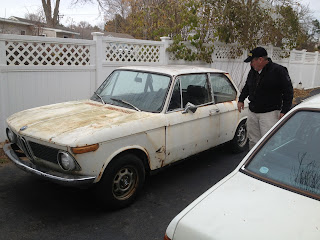 Safe at home in the driveway, in all its two-tone glory. 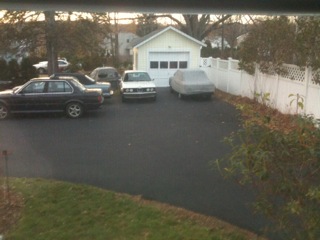