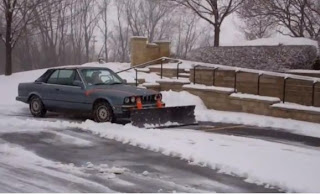 Convertible as a snow shovel? No problem!

Don't look now, but snow season is rapidly approaching, and what better car to clear snow from a driveway than a... mint E30 BMW 3 Series Convertible. While most plow vehicles are big, heavy-duty trucks, Nordic Auto Plow didn't want the rest of us to be left out in the cold, so the Chicago-based company developed a plastic, light-duty plow that can attach to almost anything – including a car, an ATV or even a riding lawn mower. Now, this isn't the first time we've seen a product like this before, but the fact that the company turned the Ultimate Driving Machine into the Ultimate Plowing Machine definitely grabbed our attention.
This plastic, modular blade hooks to the front or rear of just about any vehicle using a pair of straps and a pair of bungee cords, and since it only rests against the car's bumper rather than actually being attached to it, we imagine it would be pretty hard to cause any frame damage. On most cars with plastic fascias, there will most certainly be paint damage, though.
Still, weighing under 50 pounds, taking less than a minute to install, costing less than $700 and being able to remove snow from the heated comfort of your car, this would probably be a time-saving, cost-effective alternative to a snow blower when clearing a driveway or small parking lot as shown in the videos below. Now all you need is a Mr. Plow jacket.

"Assembly & Attachment" Quick Links
TIPS for the user of the Nordic Auto PlowPLEASE READ PRIOR TO FIRST USE!

Here it is folks:
http://www.nordicautoplow.com/