OK, this is a little off-topic today but it is a question that comes up from time to time.  It is kind of a fun topic, so here are a couple of speculations on it.  Enjoy! 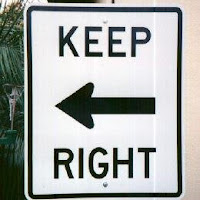 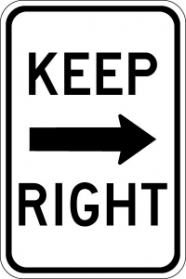 Why do the English drive on the "wrong" side of the road ?

Well it's one of those trivia questions that can really nag at you until you find an answer, I did some research and discovered the following:
In days of old logic dictated that when people passed each other on the road they should be in the best possible position to use their sword to protect themselves. As most people are right handed they therefore keep to their left. This practice was formalised in a Papal Edict by Pope Benefice around 1300AD who told all his pilgrims to keep to the left.
Nothing much changed until 1773 when an increase in horse traffic forced the UK Government to introduce the General Highways Act of 1773 which contained a keep left recommendation. This became a law as part of the Highways Bill in 1835.
Reasons to travel on the right are less clear but the generally accepted version of history is as follows: The French, being Catholics, followed Pope Boneface's edict but in the build up to the French Revolution in 1790 the French Aristocracy drove their carriages at great speed on the left hand side of the road, forcing the peasantry over to the right side for their own safety. Come the Revolution, instincts of self preservation resulted in the remains of the Aristocracy joining the peasants on the right hand side of the road. The first official record of this was a keep right rule introduced in Paris in 1794
OK, that explains the UK and France but what about the rest of the world ?
Britain's imperial expansion (all of the pink bits on old maps) spread the keep left rule far and wide. This included India, Australasia and much of Africa (Although many African countries changed to the right later when they became independent).
France also had quite an empire after the revolutionary wars and the keep right rule spread through much of modern day Europe and to colonies such as Egypt. The connection with the USA is thought to be General Lafayette who recommended a keep right rule as part of the help that he gave the Americans in the build up to the war of Independence. The first reference to keep right in USA law is in a rule covering the Lancaster to Philadelphia turnpike in 1792.
But what about Japan ? well in the 1850's Gunboat diplomacy forced the Japanese to open their ports to the British and Sir Rutherford Alcock, who was Queen Victoria's man in the Japanese court persuaded them to adopt the keep left rule.


Enter the MOTORCAR !
Very early motorcars followed the principle of a horse driven carriage and the chauffeur was seated in the middle. Once the owners of the vehicles realised what fun they were to drive they wanted their wife/companion to sit with them so the decision had to be made, which side !
The side of the steering wheel followed the tradition in the country so that the first cars (Benz in Germany) were left hand drive as they drive on the right. The major exception to this was that racing cars were almost always right hand drive because it was better suited to circuit racing. In the USA Pierce-Arrow were an example of this and in Europe, most pre 1950 Italian Sports cars are Right Hand Drive, including all pre 1956 Lancia's. Remember also that every Bugatti is Right Hand Drive.
I know of only 2 cars with a centre steering wheel. The prototype Amphicar and the current McLaren F1 (There are one or two other differences between these vehicles, I think top speed comes into it, but I would summarise by saying that the F1 is not best suited to use in a river !!)
And so to the future. Despite Euro-pressure the consensus is that Britain, or any other Drive on Left country, will never change. Two reasons, traffic density make the switch impractical (the last time it was successfully done was in the 1950's with less than 10% of current levels, and, probably the main reason, good old Sir Rutherford Alcock ! The Japanese are the worlds largest car producers, they need to produce vehicles for their own market and need to export so will always produce left and right hand drive vehicles thereby guaranteeing a supply for the rest of the world.

So why then, even in England, do boats keep right ?
Good question with no clear answer, the favourite theory goes back to the fact that most people are right handed, if that was the case and if the boat was propelled and steered in the same way as a punt then you would want to sit on the right hand side and steer with a pole or board (might be where the word starboard comes from). If this is the case then you would keep to the right so that it is easier to reach the bank.
Recently I heard of another reason that makes a lot of sense, early powered boats used automotive engines and often were simply the engine in the middle of a boat with an extension on the rear of the crankshaft to drive a propeller at the back of the boat. Most engines (and until recently all engines) turn in a clockwise direction when viewed from the rear. A high powered engine particularly in a small round hulled boat will succumb to the laws of physics and the boat will try to turn in the opposite direction to the propeller. This could be seen in the right side lifting slightly when under power, to overcome this early boat builders put the seat, steering gear, and anything else heavy, on the right. 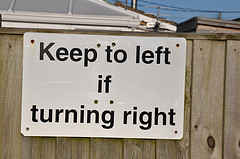 Why in Britain Do we drive on the Left ?

About a quarter of the world drives on the left, and the countries that do are mostly old British colonies.

Japan also drive on the left. This strange quirk perplexes the rest of the world; however, there is a perfectly good reason. Up to the late 1700's, everybody travelled on the left side of the road because it's the sensible option for feudal, violent societies of mostly right-handed people. Jousting knights with their lances under their right arm naturally passed on each other's right, and if you passed a stranger on the road you walked on the left to ensure that your protective sword arm was between yourself and him. Revolutionary France, however, overturned this practice as part of its sweeping social rethink. A change was carried out all over continental Europe by Napoleon.The reason it changed under Napoleon was because he was left handed his armies had to march on the right so he could keep his sword arm between him and any opponent. From then on, any part of the world which was at some time part of the British Empire was thus left hand and any part colonised by the French was right hand. In America, the French colonised the southern states (Louisiana for instance) and the Canadian east coast (Quebec). The Dutch colonised New York (or New Amsterdam). The Spanish and Portugese colonised the southern Americas. So The British were a minority in shaping the 'traffic'. The drive-on-the-right policy was adopted by the USA, which was anxious to cast off all remaining links with its British colonial past. Once America drove on the right, left-side driving was ultimately doomed.If you wanted a good reliable vehicle, you bought American, for a period they only manufactured right-hand-drive cars

. From then on many countries changed out of necessity. Today, the EC would like Britain to fall into line with the rest of Europe, but this is no longer possible. It would cost billions of pounds to change everything round. The last European country to convert to driving on the right was Sweden in 1967. While everyone was getting used to the new system, they paid more attention and took more care, resulting in a reduction of the number of road accident casualties. Since September 2009 Samoa drives on the left instead of the right.The main reason for this is that they want to use right-hand-drive cars, for instance from Japan and New Zealand, which both drive on the left. Countries that drive on the LEFT include:-