Anyone know the whereabouts of this Baur Targa? 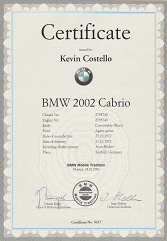 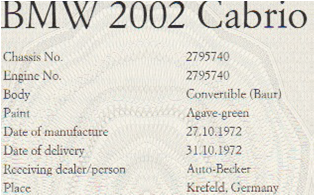 UPDATE 12/20/2012:  More info from Kevin in 2002faq.
Tom: I noticed your question about "Kresfeld"... Maybe it was "Krefeld", at any rate it's somewhere in Germany and the story was this: Rich textile type traveling on business there spots it, wants to buy it but the problem is it's the salesman's personal car. Money is god, so as soon as he wowed this salesman it was put on a company plane and sent home to somewhere near Charlotte, NC. When I bought it it showed 69,000 km on the clock.

"I used to hear a lot of speculation about how if it was a model 71 that was made in late 72 then why did it have square tail lights and a model 73 front clip. There, the strangeness stopped, though as the rest of the car seemed correct for a model 71. At one point the guy that bought it in Chicago got in touch and insisted that the front and rear clips had been altered. About a month later he called back to say he and his local wizards in Chicago now thought it had not been altered. The only horrible thing that was done to the car (when it was still owned by the used car salesman in Kresfeld (SP?)) was someone put a tinted moonroof in the Targa lid.."

Car History Update:  So we know that Kevin owned this Baur Targa in NC, and the person he bought it  from around 1996 brought the car from Krefeld, Germany to Charlotte, NC at some previous time.  It was previously owned by a used car salesman in Krefeld.  Kevin sold it around 2004 to someone in the Chicago area (where this 2010 BAT ad below is from) ..... and then it went to parts unknown. That is a start!  Thanks, Kevin!

This 1973 BMW 2002 Targa (VIN 2795740) was given a high quality, bare metal exterior restoration three years ago to the tune of $8,500 plus parts. Nearly all gaskets and seals were replaced with OEM new parts, as there are many rubber parts specific to these Targas thanks to a pop-out front top and folding rear soft top. The car then won the 2002 People’s Choice Award at a 2008 Windy City BMW event and has remained garaged, covered, and away from any foul weather. It is available in Chicago, Illinois for $19k. Contact us at mail@bringatrailer.com if you are interested.

The car originally had round tail lights, but a prior owner replaced them with the rectangular ones that were introduced with the 1974 model year. Some 2002 owners found the rectangular tail lights more attractive and preferred the updated look. Square lights with the chrome bumpers  give the car a Euro look. The only rust detected during the body work was in the rocker panels, which were removed and totally re-fabricated. The interior of the trunk and engine compartment were also painted given the color change to Inka Orange.

The interior is in good original condition. There is a slight tear in the driver’s seat base, but otherwise the seats look very tidy and the seller tells us they are quite comfortable. The seat cushions could use some new horsehair padding to preform as original. An entire interior restoration was quoted to cost around $2,500, but the car is not desperate for it. The dash does have one slight crack as shown in the photos, and the Nardi wheel would remain a nice match even if the interior was changed to black.

Mechanically, the car is extremely reliable and sound according to the seller. It is serviced near Chicago by Ben Thongsai, who is well-known in the 2002 community as an 02 specialist. He can vouch for the condition of the car. It starts right up and is a great driver. All stickers in the engine compartment were also added after the paint work.