You Are There 1971: Roundel References The Touring and New 2002 Baur Targa. Priceless!

Here is an excerpt from Roundel, circa 1971.  It contains an update to the Touring, and an early reference to 'an odd-looking convertible with a built-in roll bar", that is 'not likely to reach the US either".

The reference is to the 2002 Baur Targa, no doubt. 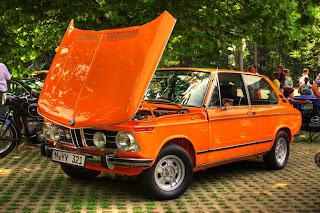 BMW is realigning its models. The Touring,  r e -
viewed in the April R & T as the Touring 2002 Tii
with fuel-injection engine, is being spread out as
predicted: this hatch-back version of the 1600-2002
body will become available with the regular 1600
and 2002 (1. 6 and 2. 0 liter engines), signaling its
future availability here.
The regular 2-door models get improvements and
new names. They'll be the 1602, 1802 and 2002
now: the 1802 has the 1. 8 liter engine and is thus
a new combination, while the 1602 is simply an updated 1600 and the 2002 gets updated without a name
change. The changes: rubber-covered bumpers,
newly shaped seats, a "safety" instrument panel
with recessed switches, improved electrics, wiper/
washer and heater, and some minor mechanical improvements. The 2002 TI becomes 2002 Tii, getting
mechanical fuel injection to replace its two carburetors. Meanwhile, back in the U. S. , we don't
get anything with more than one carburetor, so we'll
have the 1602 and 2002. There would be no point in
adding the 1802 to the U. S. lineup. The lineup for
Europe also includes an odd-looking convertible with
built-in rollbar, somewhat like the Triumph Stag.
Porsche 914 and Targa: this isn't likely to reach the
U. S. either.
Europe gets its version of the Bavaria, a basic 6-
cyl. model with either 2.5 or 2.8 liter engine
available. Following the Geneva introduction of the
3 liter coupe (3.0 CS), the 3-liter engine now goes
into a 3.0 sedan to replace the former 2800 sedan,
and at the same time all 6-cyl. models get revised
suspension calibration and minor body changes.
Chuck Baldwin