YOU ARE THERE 1983: Federalizing A BMW TC1 Baur: An Eyewitness Account

What was it like to buy and own a NEW (!) BMW Baur in 1983?  Here is a first hand account I discovered in an old issue of Der Bayerische.  What a great magazine!  You will see a familiar name, btw:  the ubiquitous Lothar Schuettler! 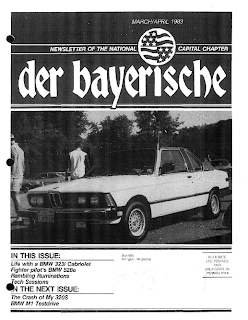 The following is reprinted in its entirety from Der Bayerische March/April 1983:
LIFE WITH
A FEDERALIZED CAR;


to the manifold as possible to meet the nitrogen oxide
limits, which meant putting it very far forward. The air
pump was tucked in too close to the inner fender, so
some minor repositioning was necessary after purchase.
The same repositioning was required for the power steer-
I ing pump, which had been moved to accommodate the
air pump and had subsequently worn a pinhole in a
radiator hose. Another problem was replacing a piece of
heater hose which had been installed by Sunbelt on the
supply side of the power steering pump. They needed
some extra length, and apparently heater hose was the
only thing they had laying around the shop! In other
areas, however, the Sunbelt federalization is quite good.
This particular car was fitted with U.S. 5 MPH bumpers
(no longer necessary under the relaxed standards) and
the quality of the conversion is high. And, the door beams
that were added for crash protection were bolted rather
than welded in, which makes for a neat installation when
viewed from the end of the door. The seatbelts work quite
well, the steering column conversion is excellent, and the
gas tank filler neck conversion (the unleaded syndrome)
came with a locking gas cap.
Regarding any minor problems, VOB has been
absolutely great about the car. Lothar Schuettler stocks
basic parts for the car, and there are other stateside suppliers
as well. (The warranty with the cars, by the way, is
a standard European one year arrangement with a VOB
five year/50,000 mile drive train warranty.) It should be
said, however, that even such minor things as the dashboard
knobs are peculiarly German — the unique air conditioner
knob started to strip out and we found it
necessary to repair it since a special order replacement
from Germany never came through.
Well, that's enough on the intimate technical details of
the car. What's it like in daily use? Spectacular is probably
the best word for it. People ring the front door bell during
the dinner hour to ask about it. Passersby stop to
reminisce about their long lost 320 or 2002 or 530 (no
Isetta owners yet). A fellow BMW owner stopped her car
in the middle of a busy street to stare when I passed her.
White haired men in four door Chevrolets smile and wave.
We've gotten accustomed to having 60 MPH door
handle-to door handle window-down conversations with
fellow motorists on freeways about the car. The "thumbs
up" sign is common, and we collect thumb prints on the
hood from the curious even when the car is protected at
the back corner of a parking lot. Kids in souped up
Camaros stop to check out the top, although when I tell
them it's a SIX cylinder they think it's the economy model
(No V-8??). I still get shut down by 5 liter Mustangs and
Z-28's in the stoplight grand prix, but everything else has
trouble getting away. For some reason, the car makes
middle aged people who drive (or is it aim?) Chrysler products
mash down their accelerators when we're side by
side. Freeway driving becomes hazardous to one's health
when eight high school kids in a '66 Chevy park a few inches
off the bumper to stare. The mere act of passing in
the fast lane makes other people match the speed to
check the car out, and even eighteen wheelers honk and
wave. The uniformed say the car is like " . . . that Toyota
I convertible" conversion, and hardly anyone guesses the
high price. Owners of early 320's suggest that it probably
costs $18K (!), with most people saying $20K. (Let's see .
. . with a new Ford Mustang convertible at $16K, that
would be some deal

Is a federalized 323 cabriolet worth the money? it's
hard to say; by paying the money, I guess I've made my
choice. The car IS about as unique as you can get, and
obviously "unique" has a price . . . high. The uniqueness
of having a U.S. certified factory six cylinder 3 series will
pass if the so-called 326 e is actually imported, but on the
other hand a Baur BMW cabriolet will always be rare. If
the federalization loophole disappears as some predict it
will, the car will become even more unusual. On the other
hand, if the loophole stays open, federalizers may get
more competent in doing easy conversions, and competition
could drive prices down considerably. Parts availability
could be a problem in any case; only time will tell
on that issue, but fortunately most parts are common to
various models.
What IS safe to say is this: that with the top down in
good weather, hung out sideways on a 495 entrance
ramp, starting to enter the stream of traffic by shifting from
second to third gear at 60 MPH . . . the car is pretty hard
to beat. It's a pricey BMW that may or may not appreciate
in value, but all-in-all its a HAPPY car, and that's
worth a lot!
Skip Marsh
SELECTED 323i SPECIFICATIONS
• 143 bhp 2316 cc 6 cylinder engine
• 140 ft/lb of torque @ 4500 RPM, 9.5:1 compression
• Vented front disc brakes
• Rear disc brakes, handbrake via drum brake
• Tilt angle limiters on the front suspension struts
• Sports suspension
• Dual exhaust
• No front wheel shimmy, no brake dust
• Cabriolet: no rear stereo speakers; fiberglass top panel
stows in a trunk rack
• Fast and smooth, vibration-free motoring.