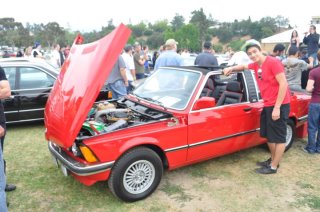 
We have recently had some discussion in the forums on the cost of the bringing a grey market Baur 323i into the US back in the day when they were new, or relatively new.  One article stated the owner spent $31000 ($33000 by 1983!) to get his Baur dlelivered and federalized.  That seemed like a hell of a lot of money, for those days, especially when base prices for a US Spec 320i appeared to be starting in the low teens.

Well, I was quite curious about all that.  You may recall that, in a moment of mischievousness, I posted an April Fool's Day ad in this blog the other day.  That was great fun, btw, and in the course of some discussion about it afterward in the forums, the Baur April Fool's Day ad, which you see below, was mentioned.  (BMW UK, btw, has a tradition of posting these spoof ads every April Fool's Day, btw... so there are many more of them around.  You have been warned!)     ;)

I happened to notice something in the Baur ad which is relevant to our discussion of grey market Baur prices back in 1981, or so.  Look closely at the very bottom line in this ad  (very small print).


So I did a little research, in the hope of shedding some light on what all of that would mean to us today, in 2012.

That is a relatively whopping charge for the Cabriolet conversion.  Now you have to add in the Federalization conversion charges, estimated to be about $5000 in 1981.


Bear in mind, that these numbers are about $2500 ($7143 in 2012 dollars)  less than the number quoted in the article.  For example, we have used the British figures which included delivery and tax:  delivery to the UK and tax in the UK.  Those figures may be different for delivery to the US, and for US taxes.  Grey market cars (like the 323i) were not imported by BMW, but by private individuals.  That may affect the cost of shipping.

This isn't intended to be conclusive, btw, but only to add to the discussion.  Foor example, this discussion above gives us NO information on a US Spec 320i!  So there are some obvious limitations.

We also know that many grey market cars, including some Baurs probably, were brought in as USED cars from Europe.  How did that affect the cost of the transaction?

It does give what appears to be a roughly accurate picture of the cost differential between the 323i Baur Top Cabriolet, vs the rest of the BMW offerings (at least the UK offerings).   It appears that the Baur option was quite an expensive choice.

There is still an element of speculation and guesswork here however.  I would love to have someone post the original sales paperwork for a grey market 323i Baur in the US from that era, along with the same paperwork for a US Spec 320i.

Anyone have that paperwork?

*For more on Koko's Baur:
http://baurspotting.blogspot.com/2012/07/the-great-baur-awakening-begins-our.html