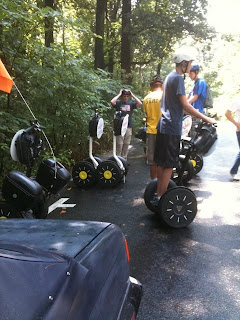 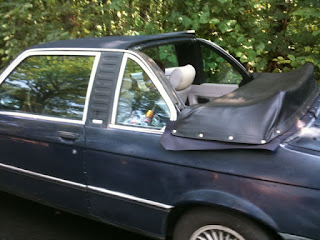 The Roaming Baur on Little Round Top.
Hardtop on, cabriolet open: a great way to drive in the summer sun! 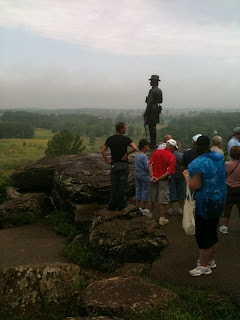 Statue of General Gouverneur K. Warren gazing toward Devil's Den and the Valley of Death on the left, below. In the distance you can see The Peach Orchard, where General Sickles committed his infamous blunder. Brian is on the left in the black t-shirt. 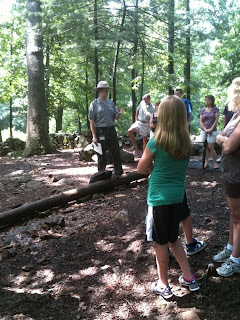 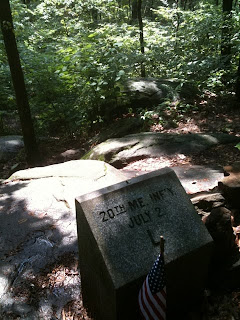 This was the very end of the Union line along Cemetery Ridge.  if this postion fell, the entire Union line could have collapsed, with perhaps a different outcome to the battle, and the entire war.  The movie "Gettysburg", starring Jeff Daniels as Col. Joshua L. Chamberlain, 20th Maine, features this part of the battle.  It is worth seeing. 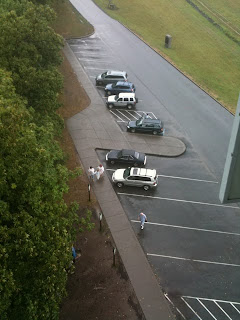 Looking down on the Baur from the top of the Longstreet Tower, Gettysburg Battlefield. 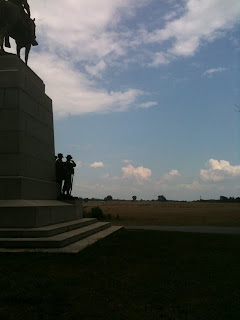 The Virginia Monument, one of the starting points of Pickett's Charge on July 3, 1863 at Gettysburg, PA.  their target:  the 'copse of trees' just to the right of center in the photo. 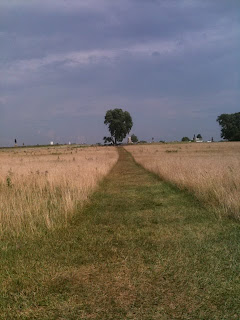 This photo depicts a part of the route of Pickett's Charge at Gettysburg. The famous "Copse of Trees' (ultimate target of the Charge) can be seen on the right edge of the photo. 'The Angle' at Gettysburg is directly ahead of us, and continues toward the right of the pic. Brian and I have just crossed the Emmittsburg Road on this 1000 yard walk across an open field. This is the second time I have walked this route, and it is no less moving than it was the first time.
The ground before us was a killing field on July 3, 1863.   The Confederate assault was awe-inspiring in its martial splendor---12,000+ men advancing in a line that stretched over a mile wide, marching across an open expanse  for about 1000 yards toward an almost certain death.  Rifled muskets of the time were accurate at over 500 yards.  Artillery fire blew gaping holes in the line, taking out dozens with a single blast.  Horrific carnage, incredible valor and courage on both sides. An uphill charge into sheets of flying lead and steel. Yet, against all odds, the Confederates reached their target, crossed the stone wall at The Angle, and nearly succeeded in carrying the Union line, until Union reinforcements forced them back.  The last cannon shot was a double load of 'canister' (grapeshot shrapnel ) by a Rhode Island battery at a range of ten yards. Unimaginable destruction to bone and flesh at point blank range. The outcome of the war, in the opinion of many historians, hung in the balance.  Ultimately, the Charge failed, and the Confederate forces returned to their lines, losing about half of the men who started.
The Roaming Baur at The High Water Mark of the Confederacy 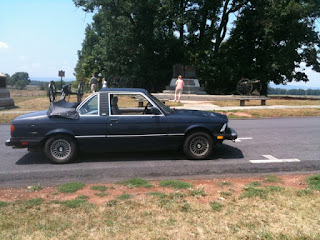 The Angle and the Copse of Trees: the designated target of Pickett's Charge. Gettysburg, PA.

August 9, 2011. By this time we had discovered one of the wonderful advantages of owning a Baur: leaving the hardtop on, opening the rear cabriolet, an option normal convertibles do not have! This gives occupants of the car protection from the hot sun, while allowing tremendous cooling air flow! Brilliant in this hot weather.


By the way, when we met up with Lawrence Charlemagne (Baur #0872) the next day, we found out that that is exactly the way he drives his Baur in the heat! 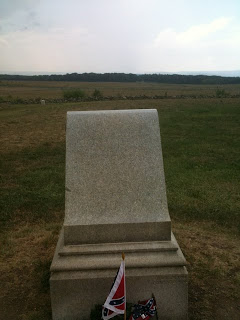 This monument marks the spot where Confederate Brigadier General Lewis A. Armistead received a mortal wound (shot three times at close range) after breaching the stone wall at The Angle, which can be seen in the background.  He died of his wounds two days later.  This spot was close to the furthest penetration of Union lines by the Confederate forces.  In the far distance, you can also see the line of woods where "Pickett's Charge" (also known as Longstreet's Assault, since Pickett's Division was only one of three that actually made the assault) began.
Fifty years later, in July 1913, at the Commemoration of the Battle of Gettysburg, there was a re-enactment of Pickett's Charge by the survivors of the battle.  When the Confederate Veterans emerged from the woods onto the field to begin their advance, an audible gasp was heard from the Union lines. A few minutes later, as the fellow countrymen of one unified nation greeted and embraced their former enemies over the stone wall at The Angle, battle-hardened Veterans were brought to tears as they vividly recalled the shattering events of that fateful day... events that forged a nation from the white-hot flames of conflict and blood.
The Roaming Baur, a Connecticut Yankee by birth, doffs his cap in respect and admiration to all of those Honored Dead, and the Survivors on both sides.  May they rest in peace.
You can find the following speech, considered by many to be the greatest speech in American History, carved in stone on the left wall as you enter the Lincoln Memorial in Washington, DC.  273 words that capture the essence of a nation enduring its greatest trauma.
THE GETTYSBURG ADDRESS:

Four score and seven years ago our fathers brought forth on this
continent a new nation, conceived in liberty and dedicated to the
proposition that all men are created equal. Now we are engaged in
a great civil war, testing whether that nation or any nation so
conceived and so dedicated can long endure. We are met on a great
battlefield of that war. We have come to dedicate a portion of
that field as a final resting-place for those who here gave their
lives that that nation might live. It is altogether fitting and
proper that we should do this. But in a larger sense, we cannot
dedicate, we cannot consecrate, we cannot hallow this ground.
The brave men, living and dead who struggled here have consecrated
it far above our poor power to add or detract. The world will
little note nor long remember what we say here, but it can never
forget what they did here. It is for us the living rather to be
dedicated here to the unfinished work which they who fought here
have thus far so nobly advanced. It is rather for us to be here
dedicated to the great task remaining before us--that from these
honored dead we take increased devotion to that cause for which
they gave the last full measure of devotion--that we here highly
resolve that these dead shall not have died in vain, that this
nation under God shall have a new birth of freedom, and that
government of the people, by the people, for the people shall
not perish from the earth.
Abraham Lincoln, President of the United States
At the Dedication of the National Cemtery at Gettysburg, PA
Thursday, November 19, 1863
-------------------------------------

For more information on the Battle of Gettysburg, try this link:
http://www.brotherswar.com/intro.htm
Posted by tom82baur at 3:11 PM