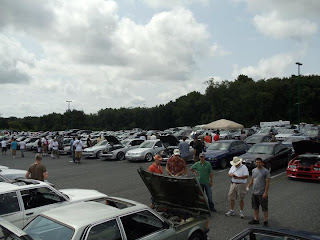 Part of the E21 turnout: (left to right) Brian (bcalis), Steve (steve52), my son Brian, me (tomscat1), and Charbel. Photo from Charbel's collection. Jeff (JeffM3) and Dan (midlifebmw), and Mike and Penny B. (not present for photo), together with the above, complete the E21 presence at Bimmerfest East.  There were 13 E21s registered, but apparently not everyone made it to the show grounds. 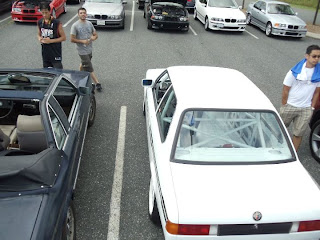 tomscat1's Baur and charbel's amazing E21.  That is charbel himself in the grey t-shirt, upper left of pic. 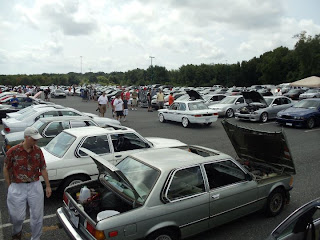 Charbel cruising the parking lot, turning heads everywhere. Did I mention what an awesome car that was? Unbelievable.
E21 group in foreground (Steve52 in the white hat).  tomscat1's Baur lower right, bcalis' 320i, Steve52's white 320is, JeffM3's 320i (right to left).  Jeff is from Baltimore, bcalis is from DC, steve52 drove down with us in the Turner Motorsport caravan from CT.  (See earlier posts around August 5-7 re: "Hazards of Caravanning".)
Both photos above from Charbel's collection. 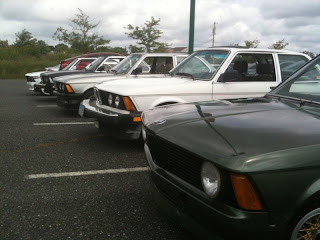 Right to left:  JeffM3, Steve52, bcalis, tomscat1, charbel. Dan (midlifebmw) got separated in the action, and joined the group later on.
A typical Bimmerfest East spectator.  A sight so common that day that it is hardly worth mentioning.  But I thought I would anyway.  A picture is worth a thousand words. 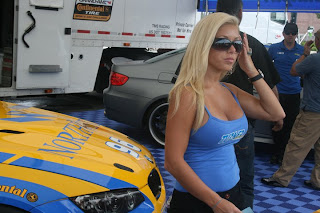 I offer all of the above in the hopes that it may help to swell the ... umm ... turnout ... for the next Bimmerfest East.  As you can see, the BMW eye candy was awesome, and the cars were not bad either!
﻿
Posted by tom82baur at 9:26 AM