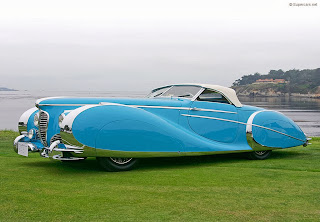 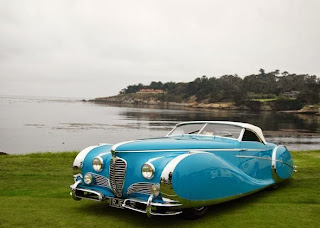 "As curvaceous as its owner, this 1949 Delahaye Type 175 S Roadster is going up for auction on August 14 in Monterey, California for between $4 and $6 million. The stunning car was once owned by Diana Dors, an English actress and sex symbol who is also referred to as Britain’s answer to Marilyn Monroe. The car is one of only 51 ever made and flaunts French curves of the ‘30s, see-through steering wheel and bird motifs on the inside of the doors. Delahaye’s beauty is clearly visible in the details, such as chrome accents that highlight the curves, the embedded turn signals flanking the sides and the elegant facade. Parisian coach-building company Saoutchik created the body of this outrageous car. Sir John Gaul, a good friend of Prince Rainier, purchased the car new in Paris and after about five years of ownership, he sold it to Diana Dors for £5,000. She was just 17 years old at that time and didn’t even have a driving license. Alain Squindo, from RM auctions, said…
This car was made when this coachbuilt era was almost at an end, but this is one of the most spectacular and outrageous examples. It is a one-off and would have been extremely expensive at the time – it is extravagant and flamboyant.
The car has been completely restored and delivers 165bhp with its 4.5-liter six-cylinder engine. The Diana Dors-owned 1949 Delahaye Type 175 Roadster is one of the featured lots at the RM Auctions’ Sports & Classics of Monterey auction."

Not sure who Diana Dors is yet?   These guys knew who she was. 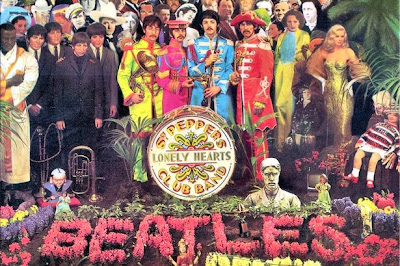 Diana Dors is the knockout in the gold lame dress at the right of the picture.  Yes, the one that you thought was Marilyn Monroe.  OK, we ALL thought that was Marilyn Monroe, truth be told.  Now, what were we saying about .... gracious curves?  Yeah.  And the car is not bad either!  ;)

So, all is forgiven?    Righty right.