Taking A Header: Origin of the Phrase 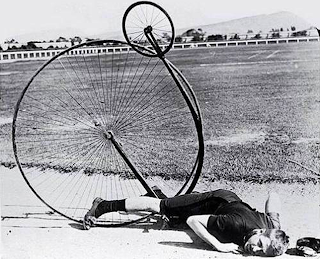 I saw this pic on a link posted today by Rob Siegel in Facebook.  The link was a look at some 18 obsolete words in the English language that 'never should have gone out of style'.   It is pretty amusing, and I have attached the link at the bottom of this post.

However, it was the picture that really caught my interest, and I thought for sure that one of the obsolete words/phrases to be referenced would be the one that perfectly describes the misfortune that has befallen the poor guy lying in a heap under his 'high-wheeler'.  Because there is just such a phrase, and you have probably heard it, although perhaps not recently.  I can remember my grandmother using it to describe someone who had taken an unfortunate fall, usually headfirst.

But I didn't know the exact origin of that familiar phrase.  The phrase is "taking a header', which is exactly what this guy has just done.

Here you see depicted a mode of transportation that became popular back in the 1870's.  Popular, that is, if you happened to be a bit of an athletic dare-devil, and, as a rule, male.  Very few women in those days would mount one of these contraptions, if only because their mode of dress in those days didn't lend it self well to the task. 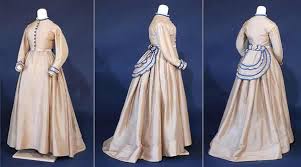 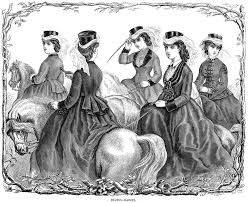 Imagine trying to mount one of these high-wheelers dressed like the above.  And you can't ride one side-saddle, as you might a horse. 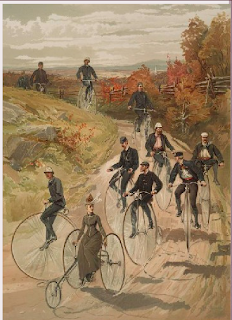 Here is a depiction of the differences in male vs female bicycle /tricycle transport in the Victorian era.  The woman in the picture is astride a three wheeler, which is much more manageable, given her long, flowing skirts.  The men are mounted on high-wheelers.

Ok, that being said, we can return to our discussion of the origin of  'taking a header', although I am sure that  by now my readers can see where this is 'headed'.

The high-wheeler required a certain amount of athleticism to mount and ride, and to maintain proper balance while under way.  The height of the large wheel was determined by the height of the individual rider.  Or more precisely, the length of his leg when extended.  The high-wheeler is designed so that one revolution of the pedals results in one revolution of the large wheel.  Therefore, individuals of different heights could have different sized high-wheelers.

Now here is the tricky bit:  notice the placement of the handlebars in relation to the rider and the centerline of the wheel.  When riding the bike, the rider's legs are nearly directly under the handlebars.  That is all well and good when the bike is under way----- unless one happens to encounter along the journey the bane of every high-wheeler's existence:   an object obstructing the path which the front wheel is unable to roll over easily.  A piece of wood, a good-sized stone, or similar.

What happens?  The forward motion of the large front wheel stops..... but the high mounted rider does not.  And, to make matters worse, since his legs are restricted by the placement of the handlebars---  actually trapped under there---- his body simply continues to follow the rotation of the front wheel!  Since it is not so easy to just dismount, or jump off the bike, the cyclist simply rotates with the big wheel ---- head first into the ground!  Thus, he 'takes a header'!

Now look at the top picture again.  Notice the position of the smaller wheel.  It is located where the cyclist used to be.  The high wheeler has done a 90 degree rotation, and the unfortunate cyclist's face has just had a 'close encounter of the worst kind' with the Planet Earth!  I imagine it would be quite comical to see, if it weren't so painful to watch.   Well, for onlookers, anyway.   For the cyclist himself, not so much.

As I mentioned above, women would not be found riding these contraptions back in those days.  And although it could be argued that the reason could be that it was unseemly behavior for a woman in those Victorian days, or the mode of dress with flowing skirts wouldn't allow it, etc..   But, after seeing the pic above, I suspect that there may have been more going on.  Man Smart, Woman Smarter!

I just can't resist adding in The Great Harry Belafonte's take on this!
http://www.youtube.com/watch?v=kTDvCLAT8hg