Tragedy on the Peking to Paris Rally

Very sad and tragic news to report from the Peking to Paris rally today.  We know there is always a risk and a possibility of this kind of accident happening,--- and it can happen anywhere, at any time, really.  That knowledge however is no consolation when something like this hits someone we know, and to someone in the prime of life and in the midst of such an exciting peak experience.  How very tragic.  Our sincere condolences to Emma's family and friends. 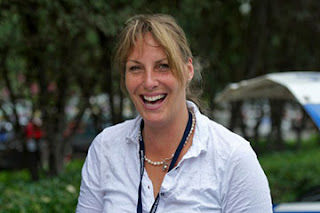 Another long day today, 674km from Omsk to Tyumen. This is the nature of a drive across Russia, it's a big and impressive place which calls for big mileages. A beautiful day also after the rain and clouds of yesterday, we drove a wide Tarmac road under a big blue sky, with countless birch trees, acres of rolling countryside and wide open farmland stretching before us. Passage controls along the route allowed plenty of time for coffee and Pirozhki, a traditional pasty sort of snack with fillings such as meat, cheese and onion or vegetables.
Road conditions caused by the recent rain made it impossible to run two of the planned off road Time Trials though, so there was only one today. A short run across a gravel 'causeway' cutting through typical Siberian marshland richly inhabited by typical Siberian mosquitoes and other biting insects. We stopped by a beautiful blue church off to the side of the test and were welcomed both by the small congregation and the Priests in charge. The setting, the sense of history, the elaborate icons, the chanting and the calm of the place greatly impressed us.
We watched a few of the cars enjoying themselves on a wide muddy corner, notably Bill Cleyndert and Mark van Hees in the Ford hunkered down over the wheel looking forward to a well earned cool drink and shower in the hotel in another 66km or so.

In the midst of this scene however we received a very sad phone call and heard that Emma Wilkinson, one of the crew of Car 92, had been killed in a tragic road traffic accident. A witness to the accident said: 'She (Emma) was driving when suddenly a Volkswagen car swayed off its lane and smashed right into their car. It was going at high speed, and one theory is the driver fell asleep. They were driving a Chevrolet C10 1970 which is a big, easy to see car.' A man and a child in the VW Polo were also killed.
Emma's partner and fellow competitor, Peter Davies, is understandably shocked but unhurt. Emma was 46 years old with two children, she was a fun loving, lively and popular member of the rally. In the three weeks we've been together both she and Peter proved themselves to be capable, competent and resourceful. Their 1970 Chevrolet C10 pickup was a remarkable sight in the the Mongolian wilderness and today our thoughts and sympathies are with Emma's family and friends including her two brothers Robert and Mark who are also with us.
The Rally Office are working with the Local Police, the Foreign Office and the British Embassy to offer the family whatever assistance is needed at this difficult time.