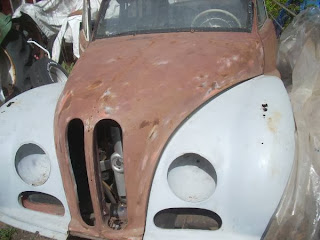 The seller is Pete S. up in the area. I have met Pete on several occasions at our local BMW CCA CT Chapter events, and I have to say that he is really a very nice fella. I like him. I also have the address of his storage shop, but I am not posting it here. Contact Pete to get that info at: 860.455.8105.

I offer this because, since this craig's listing has come out, Pete has been given some hard knocks by the general BMW community out there in a number of different forums..... as a 'hoarder', and as someone who prices his cars too high, doesn't really want to sell, is hard to deal with, etc., etc.

I don't think that this is particularly fair to Pete, nor do I think that it is particularly accurate. I think a lot of guys are going at this seeking a bargain, and they are rather disappointed when they are unable to conclude a 'steal'. Hence the 'ad hominem' attacks.
Full disclosure:  I spoke to Pete myself on Wednesday, and he could not have been more friendly, frank and gracious.  He acknowledged that he has been just inundated with calls, and he is feeling a little unprepared for it all, as well as a little overwhelmed.   He can hardly keep up with the phone calls.  You can fault him for that, if you like, but I choose to cut him some slack and give him some time to adjust.

He told me that he is looking to downsize what he has.  Which is a lot, btw.  More than 50 cars... he was not even sure how many more.  He was a little unprepared for the overwhelming response that he has received, and he is doing his best to adjust.  Please be patient.

I believe that he will sell, but.....  don't for minute think that he doesn't know what he has.  I know two stories about Pete that I would like to share here, and that I think are relevant.

1)  Pete has a huge collection of BMWs, which he has accumulated over many, many years.  50+ cars.  The word on Pete, from several sources, btw, is that he has a high asking price for his stuff.  This is not news..... local folks have known this for a very long time.  Think about that.  What is a 2002 Touring worth?  How many are there in the ?   I am not sure if it is a tii or not.  Pete is not going to give that away.

Although I have not seen his collection---- I have talked with Pete about going up to see his collection in a few weeks when things settle down a bit---- my understanding is that he has an E30 M3, a 502, a 2002 touring, some tii s, and much, much more.   I talked to him about two E30 Baurs that he has.  He frankly admitted that he really hasn't put a price on the Baurs, and that he was caught a little off-guard by the incredible response to his craigs list post.

2)  I have not heard this tidbit posted in any of the critical comments that have been made about Pete, and I don't think many people know this.  But I think it should be known.  I was given this information by BMW folks that I trust, so you can take it for what it is worth:   In the past, when CT BMW dealerships ran into a tricky problem with a vintage BMW that they couldn't solve.... they have a 'go-to' guy.  They call Pete, and he solves the problem.   Yes, the very same "Pete' who is the seller of this collection.  Pete has street cred.   cred.

3)  OK, so I have some bias here.  I know Pete to some degree, and, frankly, I like the guy.  Furthermore, we talked at our very first meeting a couple of years ago  (2011 or 2012)---- I was with my friend and fellow Baur owner, Afonso, at a BMW picnic in Manchester CT, which happens to be the very same town where Pete has his cars, btw---- and Pete had sought us out to sit and have lunch with us.  We had a nice chat.  He told me that he had a couple of Baurs in his collection of cars.  He invited me over to see them, but I was unable to arrange it that day. I regret that missed opportunity.  It is worth noting that a very similar thing occurred about a month ago at another CT BMW club picnic.  I still have not availed myself of the opportunity, graciously offered again by Pete, to have a look at his collection.

4)  Comments have been made in several forums that Pete is a 'hoarder' and really won't sell his cars.   While that is convenient for folks to say when their lowball offers are not accepted..... and it could be true to some extent.... I don't really buy it.   I think that you will find that if you bring Pete a cash offer that is close to his asking price, you will walk out of there with a car.  You are not going to get it for 50% off, so get that idea right out of your head.  Pete is no dummy.

5)  Once things settle down, I do plan to take Pete up on his offer to have a look at his Baurs, and everything else he has.   And I am looking forward to that opportunity.   Although I am not personally in the market for another car (I currently have 8 BMWs), I do know, through this Baurspotting blog, that there are folks out there who are in the market for a Baur, or for Baur parts.  I will take a look at his two E30 Baurs, and report back to this blog.  One of the Baurs was wrecked, and the other needs some work, according to Pete.

Pete may own something that could be the answer to my dream.  What price shall I put on that?

Now take a look at the other 50+ cars that he may have in his collection.  If there are 50+ folks out there with a similar kind of dream, Pete just may have what they are looking for.  They can pay his price (or close to it) and walk out with their dream car in hand, or .... they can go without.   One of the forums had a story about a guy who offered Pete $15K for a car that Pete wanted $22K for.  He didn't get the car.  But the guy right after him who walked in with $22k went home with the Porsche.  'Nuff said.  This may actually be a sign of the state of the economy, I don't know.

And, as for the folks who are looking for a steal, they will just be out of luck.

If these cars are in salvageable condition, then Pete deserves credit for preserving them, and for now making them available.  I applaud that, frankly.  And I will take that position in support of Pete, until I have information that indicates otherwise.

I can't wait to see his collection first hand, and I promise to do an unvarnished Baurspotting post on my findings.


"selling down my private 30 year collection,includes many us and euro models.1958-1995 1600,2002s many,501/502.bavaria,3.0cs,touring Tii,touring wagons,630,635,M5.bauer cab.many more.most will require work,have been in years of storage. no emails,no TEXTS serious people only. thanks 860-455-8105
And the German Cars for Sale blog:
http://germancarsforsaleblog.com/massive-bmw-collection-in-connecticut/