Car Talk from a 'Hack Mechanic' 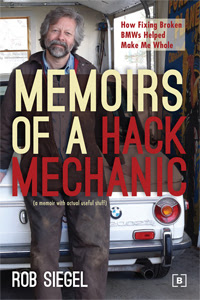 A geophysical engineer by trade, who develops technology to find unexploded shells, Rob Siegel is also a car guy, who has written a monthly “Hack Mechanic” column for Roundel, the magazine of the BMW Car Club of America, for the past 27 years. In his first book,Memoirs of a Hack Mechanic, Siegel writes about his life interspersed with “useful stuff”—like what to do if your car won’t start or how to make your car more dependable. Since its June publication by Bentley Publishing, the book has been moving up the Amazon ranks and doing well at selected bookstores.

“As a rule, we don’t publicize our print runs,” says Maurice Iglesias, sales and marketing manager at Bentley Publishing. “But suffice [it] to say, the book has vastly exceeded our expectations, especially considering that this is the first genuinely ‘funny’ book we’ve ever published.” Although Iglesias said that it’s too early to tell if it’s poised to become Bentley’s bestselling book, he calls it “our most high-profile title” of the year.

In part that’s because Bentley, which is known in automotive circles for its high-end reference manuals, has been garnering reviews for Memoirs of a Hack Mechanic in mainstream media like The New York Times and the Boston Globe. The book launched at Newtonville Books in Newtonville, Mass., near Siegel’s home. And Bentley has tagged onto Siegel’s car appearances at events like the Pittsburgh Vintage Grand Prix with book signings at nearby bookstores, in this case the Barnes & Noble in Homestead, Pa. In mid-August, he’ll be at the BMW Oktoberfest in Monterey, Calif., and will sign at Capitola Book Cafe in Capitola. Siegel has also helped with promotion in other ways, like linking his Web site on which he promotes both car stuff and his music—he’s also an accomplished folk musician—to Bentley’s where readers can visit an online appendix to the book and find out about upcoming events.
Although Siegel’s voice is distinctly his own, Memoirs of a Hack Mechanic fits into the literary tradition pioneered by John Muir in his 1969 classic, How to Keep Your Volkswagen Alive, followed five years later by Robert Pirsig’s Zen and the Art of Motorcycle Maintenance. More recently philosopher/mechanic Matthew B. Crawford added to the conversation with Shop Craft As Soulcraft. Some might argue that Siegel’s emphasis on family, cars, and the humor present in both is reminiscent of “Car Talk,” a radio program on WGBH-FM that began airing at about the same time he launched his column.
Despite the attention the book’s been getting, Siegel told PW that he might never have made the transition from columnist to author without the intervention of New York literary agent Liv Blumer, who approached him about writing a book about what makes a car guy tick. “It can’t be just a loosely connected series of your articles. It has to have a plot,” she told him. Although Siegel says that he “sulked” when she dropped the project after nine months, he adds, “in the end the manuscript was so much better for her pushing me to write more guy, less car.” Blumer also suggested that Siegel find a “boy,” or male editor. Instead, when he brought the project to Bentley where he had had a book contract for a repair manual 20 years earlier—a book he never delivered—Janet Barnes took over. With her help, Siegel found a way to add back more of the car element and weave the book’s two strands together, car and guy.
For now, Siegel is enjoying simply being the car guy he writes about in his book. “I’m a believer in the benefit of unintended consequences,” says Siegel. “The response to the book has been wonderful. I receive e-mails on a daily basis.” Plus he’s accumulating material for either moreRoundel columns or possibly another book.