Here was the view from my front porch at 9am on 1/21/2012, while we anxiously awaited word on whether the BMWCCA Connecticut Valley Chapter Annual Dinner Meeting, featuring Guest Speakers Bill Caswell and Sam Smith, would go on as planned.  The prediction was for up to 7 inches of snow before ending in the late afternoon. 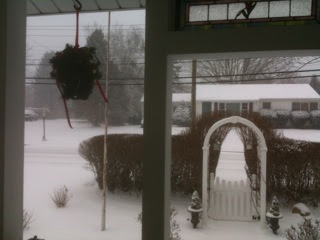 The dinner was being held at the Grand Oak Villa in Oakville, CT, a distance of some 70 miles from here.  What made things even worse, is that I own TWO BMW 325ix's.... and BOTH are currently out of commission!  Day um!  The 1989 325ix lost its transmission on Thanksgiving Day, and I just picked up a 1991 325ix 5 speed with a bad transfer case!  I bought it knowing the transfer case was bad, and my plan is to end up with at least one 5 speeed ix!  But, since it just arrived a week ago----and because I am NOT Bill Caswell!---- I havent gotten to the project yet.  What a perfect way to arrive at a Bill Caswell event:  driving a 5 speed 325ix 70 miles in a 7 inch snowstorm!  But, alas, it was not meant to be.  So, my son, Brian and I, made the trek rather ignominiously in my my wife's VW Passat 4 Motion Turbo Wagon.  My other son, Andrew, drove down from the northwestern corner of CT in his AWD Subaru Impreza.  Another interesting coincidence, but we will get to that later.
Anyway, we all arrived safely by the 6 o'clock start of the cocktail hour, despite the weather and road conditions.  Here are some pics taken during the cocktail hour by Brian, when we approached Bill C. to request that he autograph my helmet, dedicating it to my first grandson, three month old Abe.  I had purchased the helmet in 2010 to use in my birthday adventure that year:  a Holeshot Drag Race Competition at Waterford Speed Bowl in my carbureted 1977 E21 320i!  Bill was most accomodating for the autograph, and offered to sign it with a silver Sharpie that he thought he had in his bag, since all I had was a dark sharpie on a dark blue helmet.  He asked for a little while to locate the pen, and 'dont worry, I will be back to sign it." 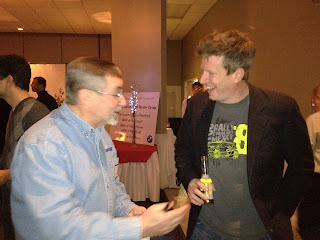 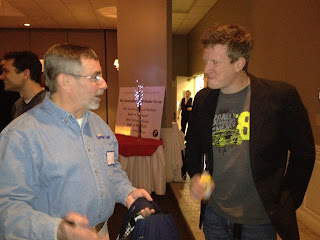 Sure enough, about an hour later, Bill appeared at our table to sign the helmet, apologizing because he didnt have the pen in his bag after all. He very naturally just pulled up a chair, sat down, signed the helmet, and proceeded, beer in hand, to share stories about himself, Jeremy Renner (the actor scheduled to play Bill Caswell in the upcoming movie), the impending movie, his cars, and other plans he has in the works!  As natural as could be, btw. The guy is just bursting with energy and enthusiasm, friendly, funny.... a fascinating character.  We enjoyed this little chat immensely! 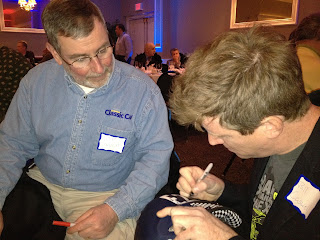 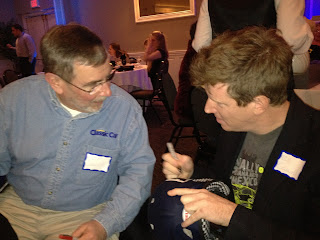 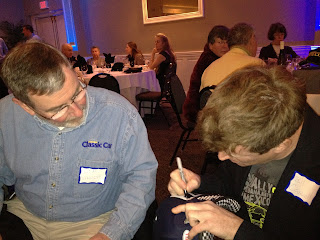 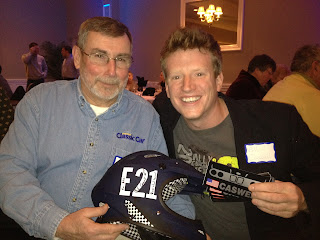 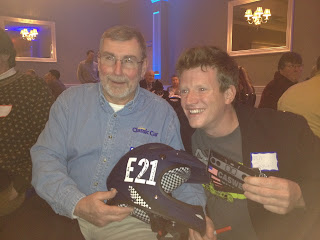 
Pics above courtesy of Andrew and Brian Schuch.