If I understood this correctly, this million dollar BMW was designed by Giorgetto Giugiaro, who also was involved in the design of the M1. 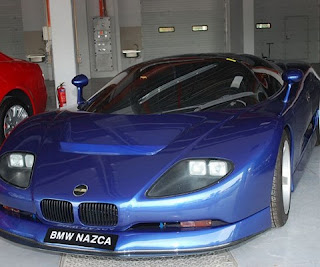 "Italdesign Nazca C2 or Italdesign Nazca M12, as has been labeled, was a concept sports car designed in 1991. The car was penned by the famed automotive engineering company Italdesign, and by the great Giorgetto Giugiaro who was also responsible for BMW’s production M1 sports car.
The Nazca M12 was equipped with the Neuromotion FC6 engine from BMW and produced 660 horsepower. The car had a top speed of 185mph. The Italian design house also presented a race-spec version of the car called the Nazca C2 at the 1992 Tokyo Motor Show, followed by a Spyder model in 1993.
Now, one of the Nazca concepts has been put up for sale by a dealer located in the Czech Republic. The 1991 Nazca M12 features an Alpina-prepped 5.7-liter V12 engine (sourced from the 750i / 850i of the era) producing 379 horsepower."

"The M1 coupe was hand-built between 1978 and 1981 under the Motorsport division of BMW as a homologation special for sports car racing. The body was designed by Giugiaro, taking inspiration from the 1972 BMW Turbo show car. Originally, BMW commissioned Lamborghini to work out the details of the car's chassis, assemble prototypes and manufacture the vehicles, but Lamborghini's financial position meant that BMW reassumed control over the project in April 1978, after seven prototypes were built. Only 456 production M1s were built, making it one of BMW's rarest models. The spirit of the M1 lived on in the M635Csi and the first-generation M5, which shared the same (though slightly modified) engine.[3]"

"The Giugiaro-designed M1 was to be assembled by Lamborghini, but Lamborghini's poor financial situation and assembly delays caused BMW to move assembly to Baur, the German convertible builders. By the time production resumed, the homologation rules for international Group 5 racing had been changed. Since BMW had not met the required sales figures, the M1 went to the new Procar series instead. By the time BMW had sold enough cars, the M1 was no longer competitive for Group 5 racing. In 1981, David Coward and Kenper Miller won the IMSA GTO category."

So there is the Baur connection. :)