We have just solved another little mystery in the E21 bimmerforums thread "Baur TC1s in the US", thanks to the posting of a Baur plate! 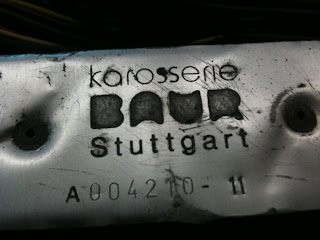 Here is the story:  way back in December 2010, Jeroen (BAUR) of The Netherlands, in response to an inquiry from me, posted a list of 33 TC1 Baurs from the International Registry that were believed to be located in the US.  (This exchange is what led me to start Baurspotting in the first place, a month or two later, incidentally.)
http://forums.bimmerforums.com/forum/showthread.php?t=1566814
Thus began the effort to locate and identify what we thought were about 33 US Baurs.  Included in that number was Baur #4210, on which we had no other information.
In the ensuing 1 1/2 years, we have been able to identify about 75 Baurs, with unconfirmed reports of perhaps 20-30 more.  We have emphasized the importance of conclusively identifying each Baur by its unique Baur plate number, to ensure that there is no confusion or duplication in the count.
We have been able to positively identify many of those original 33, and many others that have turned up that were not included in that number.  Baur #4210 has eluded us...... until yesterday!
In addition to those 33 Baur numbers, we have also had a number of Baurs for which we may have had pics or other information, but we hadn't been able to pin down their Baur number.  So that always left, as an open question, how many of the known Baurs with unconfirmed Baur numbers over lapped with the Baur numbers that we knew about, but hadnt matched with a known Baur.
We have known of sefb222's triple black Baur since I first posted a pic I had found in that 'Baurs in the US ' thread on 2/2/2011, post #165 on page 7.   Sefb222 confirmed it was his car on 2/4/2011,  a few posts further down the page.  "yep.. i still have it. it's currently undergoing a full resto-mod, and should be up and running by late spring, early summer."
Early Friday morning, sefb222 posted his long-sought Baur plate number, and BINGO!
What follows below is the exchange that took place since then in E21 bimmerforums.  This case is the Poster Child for the importance of posting the Baur plate number to positively identify each Baur.
Thank you again to sefb222 for helping us solve this little mystery!
;)
http://forums.bimmerforums.com/forum/showthread.php?t=1566814&page=23
6/8/2012 2:44am
sefb222:  i finally remembered to upload a pic of my baur tag. sorry for the delay.
tomscat1:  Thanks for posting sefb222!!
It is indeed a small Baur world.... we have had Baur #4210 on the original list from Jeroen siince Day ONE!!!... We (or at least I) just didnt realize that it was YOURS.

To see what I mean, look at page 1 of this thread, where Jeroen posted the original 33 Baurs he had listed as US Baurs. There you see it: #4210 is right there all the time!

Same with this list:
https://docs.google.com/spreadsheet/ccc?key=0AtrzAT-dK6H1dDhIemd5SVJMSEhMbDRwMW5Td0U4Q2c&hl=en_US#gid= 0
Here, we have #4210 as an unfound Baur, but we also have sefb222's found Baur listed without a Baur number! Two Baurs become one and the same!!

I love this stuff!

The pic is from the International Baur Registry:
A004210323i

How it got to the Registry, or when, since it sounds like you didn't do it, is beyond my pay grade! Do these look like pics from the previous owner, perhaps?
Here is one of those from the PO, but, even here, it looks different from the pics in the Registry: 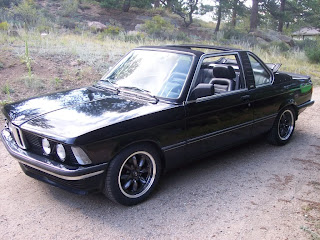 Hopefully, Jeroen, or perhaps Stephan or Uwe from the Registry, will chime in here with that info.

Thanks again for posting that Baur plate number! This is a perfect case in point in how important those Baur plates are in conclusively determining a car's identity. A similar thing just happened recently with this TC2 Baur:
http://baurspotting.blogspot.com/2012/04/amazing-grace-baur-what-once-was-lost.html


And another one from Atlanta:
http://baurspotting.blogspot.com/2011/11/another-baur-comes-in-from-cold.html

Incidentally, I am in contact with Ras (above), and, with his help, we may be about to solve the mystery of the blue Baur sitting out at that shop in Atlanta for about the last 10 years! Ras has been in contact with the owner.
http://baurspotting.blogspot.com/2012/05/hotlanta-baurs-got-em-all.html

So stay tuned, folks! We still have a bunch of Baur plate numbers for unfound US Baurs, as well as a bunch of Baurs that have been spotted but we haven't nailed down their Baur numbers. How many of them overlap, like sefb222's Baur above?


Baurspotting is ON THE CASE!