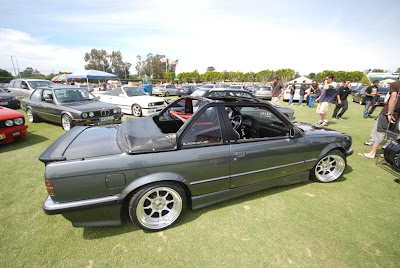 You may recall that we posted a few Baur pics the other day that we came across from Bimmerfest 2009.

Well, Our Man in NH, the ever-vigilant THEPOOLEMAN, posted the following comment to that post  today:
"Tom The 1st pic of dark grey E30 TC2 is a 318i It was a feature car in Euro tuner magizine.
here's a link
http://www.eurotuner.com/featuredvehicles/eurp_0911_1984_bmw_tc_baur_318i/photo_06.html
PooleMan "

What a GREAT find!!   THEPOOLEMAN scores BIG TIME with this one!  Thank you once again!  Hats off to THEPOOLEMAN!


So here is the article in its entirety, from eurotuner magazine October 2009.

To some people, the E30 3-Series is the most iconic BMW of all time. It has a style that was copied throughout the early '90s, and its boxy outline is still raved about by car enthusiasts today. Not only were its looks appealing, driving an E30 was just as rewarding. Forget the fancy iDrive system, adaptive headlights and traction control -there weren't any fancy gimmicks or complicated electronics.
The chassis handled like a performance car - just how cars were meant to be. For this reason, car fanatics still daily drive and modify the E30, such as this this rare drop-top '84 TC Baur 318i belonging to Ary Minassian from Northridge, CA.
No stranger to et, Ary created a '88 325is that graced the 10/06 issue. And even though he wasn't old enough to drive an E30 when new, the 25 year-old still appreciates the car's history.
Many of you know the E30 succeeded the first E21 3-Series back in '82. It came in four body styles - sedan, coupe, wagon and convertible. But one model is almost always forgotten - the TC Baur edition.
Baur was the company that built convertibles for BMW back in the '30s. It later patented the design of the folding roof BMW first used on the 2002 and later on the E30 'Top Cabrio' Baur edition before the full convertible was available. It was offered through dealers in locations such as Europe, Cananda and Mexico but doesn't seem to have reached the US officially.

When Ary came across this TC Baur edition he knew it was special and a deal was put on the table he couldn't refuse. The 318i needed a shove in the right direction and sure enough, a new personality was born several months later.
You see, Ary runs BMW specialty shop Euro Stop USA. Having opened in '02, Euro Stop has done everything from custom wheels to carbon fabrication. Last year, Ary decided to create two product lines - one specializing in fiberglass and carbon bodywork, the other concentrating on wheel designs. So, as a result, DTMFiberWerks and ESM Wheels were born...
All of DTMFiberWerks products are manufactured in-house. Ary stocks everything from widebody kits to fenders, spoilers, bumpers, mirrors, hoods and trunks. He's engineered them to be affordable, which in turn has apparently encouraged the E30 community to modify their cars. Although he concentrates on the E30, he also has inventory for E36 and E46 3-Series, plus 5- and 7-Series.
A few weeks after picking up the Baur, he fitted the full DTMFiberWerks package. The front bumper was modeled from the Alpina special edition cars, but Ary incorporated a carbon splitter to make it more modern. He also designed a rear valance, which borrows inspiration from Rieger.
The E36 M3-style skirts were then bolted on. While both the hood and trunk were replaced with carbon units - Ary told us the carbon is hand-laid on the outside, reinforced with a single layer of fiberglass for durability and cost savings.

Momo seats with G-Force harnesses
The rear features an M-Tech 1-style spoiler, to which Ary added his own carbon inserts. Finally the eyelids, mirrors and kidney grilles were sourced from his parts bin.

Before everything was painted, the fenders were rolled and pulled. "It looks more Euro with the aggressive fenders and poked wheels," he explained.
"The paint was a mess when I got it," he told us. So the fresh coat along with the new parts gave this E30 the makeover it deserved.
The right set of wheels would follow next, and ESM Wheels would deliver on the project. "We knew there was a market for four-lug, low-offset wheels, so we worked with overseas manufacturers to create our own designs," Ary revealed. The wheel used here was the 16x9" ESM 002, which shares similarities to the BBS RS.
It's a one-piece cast aluminum wheel. "They're made to be cost-effective, nice quality and everybody can afford them," he explained.

Because Ary's fenders were pulled, he used wheel spacers to push the rims out. For most E30 applications, his wheels bolt on without modification - there are 11 ESM designs from 15-18" in colors such as silver, black, flat black and gunmetal.
Ary thought lowering the car would be just as easy, but it was an enormous headache: "We had to do it four times to get it right," he remembered. "The car wouldn't go low enough."
First, he tried an Eibach Pro kit. He even cut two coils from the springs to see if it would be low enough. Then he installed coilovers in the front but that didn't work either. Eventually, he shortened the struts and used a shorter Porsche damper to get the front to sit right.
The rear suspension used a tiny 5" spring from Eibach, matched to Bilstein HD shocks. Ary was happy to report that all four tires are now resting in the fenders.
The interior followed, with Momo seats taking center stage in black cloth with silver piping. Ary then reupholstered the rear seats himself to match. The harnesses were from G-Force, which were anchored to a NRG roll-bar that was color-matched to the car.
Last but not least was the engine. Ary wanted to keep the car as a daily cruiser, so power wasn't a priority. This was the reason he stuck with the 101hp, 103 lb-ft 1.8 liter M10 four-cylinder. Minor upgrades were made to improve throttle response, such as a cold-air intake, 2002 headers and cat-less exhaust. "It has enough torque for a daily driver," he said, "but the purpose of the car was to be different. I've never seen a modified TC Baur in the US, so I wanted to build something you'd see on the streets in Germany. And since I run European license plates, the car looks as if it's from there."
Through the resources of his own businesses, Ary has created a hardcore Euro flavor for this 318i. It's not the fastest car on the street, but it does look great topless.
Tech Spec
1984 BMW TC BAUR 318i
Owner: Ary Minassian
Location: Northridge, CA
Occupation: Owner of Euro Stop USA,
DTMFiberWerks, ESM Wheels
Engine: 1.8 liter M10 four-cylinder with cold-air intake, 2002 headers, custom downpipe to 2.25" Euro Stop exhaust
Drivetrain: four-speed manual with Z3 short-shift kit
Brakes: 20AE 12.3" front rotors, stock rear, painted calipers all round
Suspension: custom coilovers with shortened struts and Porsche Bilstein dampers, Eibach springs, adjustable front camber plates, polished stainless strut bars front and rear
Wheels & Tires: 16x9" ESM 002 wheels, 5mm front and 10mm rear spacers, 215/45R R16 Falken Azenis tires
Exterior: DTMFiberWerkz front bumper with carbon splitter, side skirts, rear valance, carbon hood and trunk, M-Tech 1 spoiler with carbon inserts, DTM-style mirrors, eyelids, smoked Euro head- and tail lights, pulled fenders, shaved side markers, resprayed OE Delphin grey paint
Interior: Momo seats, steering wheel, shifter and e-brake handle, color-matched NRG harness bar for G-Force four-point harnesses, rear seats upholstered to match fronts
Contact: www.eurostopusa.com, www.dtmfiberwerkz.com, www.esmwheels.com