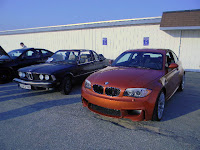 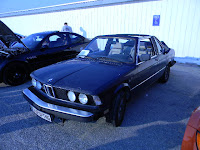 The BMW Connecticut Valley Chapter sponsored an Ice Cream Social on June 21, the first day of summer, at Misquamicut Beach, Westerly, RI, in conjunction with the RI Chapter.  Lance Johnson, CVC Chapter President was the host for the event, which took advantage of a regular car show that occurs on the beach.  Attendees included members from both chapters, and ... a good time was had by all!  Grateful thanks to Phil Clark of Mystic who took and shared these pics with us.   It was a day of record-breaking temps all over southern New England btw, registering in the mid to upper 90's!  I did the 40 minute drive in my Baur with the roof set in "Landaulette style":  Targa top in place, rear soft-top open.  I sat in the shade, while open windows allowed flowing highway breezes thru the Baur and out the open rear!  No normal convertible can do that!!!  :) 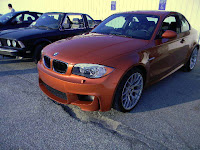 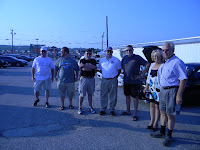 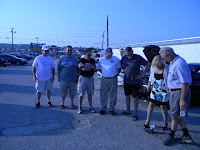 Take a moment to look closely at the group pic above right, taken a few short seconds after the pic on the left.  Never one to miss a 'teaching moment', Liz was kind enough to provide us with a demonstration of the Law of Gravity, using her drink cup as a prop.  The demonstration was a complete success, btw, as you can see from the entire group's total focus on the point of impact.  Thank you, Liz.  Good camera timing also, Phil.

BTW, I would be remiss if I did not mention my grateful thanks to Phil C. of Mystic CT for the pics that you see here.   Phil saved this beautiful 5 speed 635 CSi from the Cash for Clunkers program!  Kudos Phil!! Can you believe someone was going to JUNK that car!!!  Mama Mia! 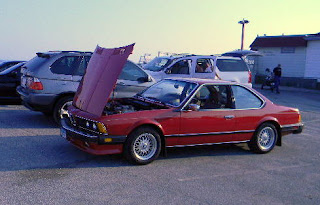 We have some group shots of some of the folks who were there.  I apologize for not having everyone's name, nor everyone's pic.  . 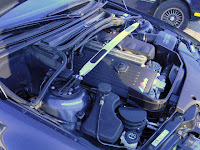 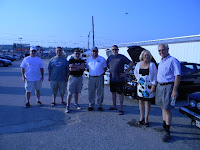 (L to R above)  Coleman (M3); the owner of the black M3 (below) whose name escapes me at the moment---sorry;  Baurspotting  (me) in the black t-shirt;   CVC chapter President Lance Johnson (white supercharged Z3):  Jim Hurczyn (sp?);   and Liz and Rich Gilman (1M). 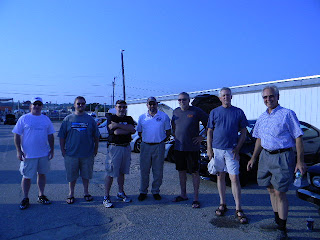 Here is the same pose, only Liz has graciously offered to take the pic to allow our photographer, Phil C, to appear  with the group.  Phil is second from right in the blue shirt.  Thanks, Phil, and thanks, Liz! 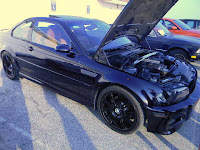 (I should mention that I deliberately folded my arms across my chest in the pics because....  I am wearing a special custom Baur t-shirt that is going to officially premiere at the Vintage at Saratoga Show on July 14, 2012.  I didn't want to spoil the surprise.  The folks at the Misquamicut Beach show got a sneak preview of it, since it had only just arrived by mail that very afternoon.  Bring your Baurs to Saratoga, Baurspotting has something for YOU!!!!   Stay tuned!) 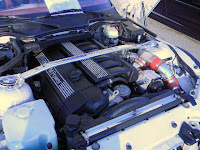 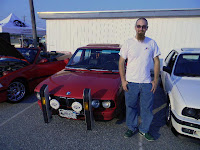 (Left) engine compartment of Lance's supercharged Z3.  Lance was not content with the 220hp of the original engine so.... he supercharged it to somewhere around 320hp, or so! 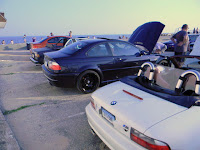 Again, I apologize for not having everyone's name, and I hope I haven't mixed up any of the car/owner relationships.

Oh.... and this is where this Baurspotting t-shirt was first unveiled, as a sneak preview to the official unveiling at the Vintage at Saratoga in July! 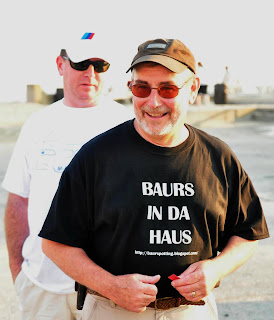 This really is a great pic taken by Lance Johnson... I especially like the fact that he caught the moment when the man behind me is reading the reverse of the shirt.... which was not 'officially' revealed until the Vintage at Saratoga two weeks later! Great job, Lance! The reverse has the Baur Top Cabriolet " 4 cars in One " graphic... showing the cabriolet, the coupe, the Targa and the "Landaulette"! Perfect timiing by the photog! Thank you, Lance!

I have more pics from Phil still to post of the rest of the show, including the non-BMW part (hot rods and classics) as well as some that I took, so... stay tuned!