Baurspotting is pleased to announce that we have made some significant progress toward one of our goals.  Our stated purpose is to identify and locate all the TC1 Baurs in the US.  We continue to work toward that goal, and we have confirmed the identity and location of 43 Baurs.  We have strong leads on 11 more, for a total of 54.  We continue to work on tracking down about 30 or 40 other reports/rumors of Baurs all over the country.

But the news today is of a slightly different kind of achievement.  Thanks to the help of a number of folks out there, we have been able to not only identify and locate Baur #917, but we have also been able to trace its history through 5 owners, going back to at least 2001, supplemented with pictures taken along the way.  Here is the story:

1) History prior to 2001 is unknown presently:  but in 2001 Baur #917 was owned by Cosmopolitan Motors of Seattle, WA.
2) 2001-2005 Bimmerforums member tcm326 of Massachusetts purchased the car from Cosmopolitan and brought it east to Massachusetts.  The picture below is one he sent me this week.  He sent me about 7 others, btw.

http://e21.tricord.be/registry/index.php?view=182
There are more pics at the site above.

5) In 2010, Josh sold the Baur to bimmerforums member mstecker (who also owns Baur #3091, a beautiful cranberry example).  mstecker was listed as being in Philadelphia PA, but thanks to tcm326, we learned that he has the cars in Concord MA.  He apparently splits his time between Philadelphia and Concord for job-related reasons.

The picture below was posted in bimmerforums last year by mstecker, with the following comment:
"It's been a hoot to drive, and runs really strong, but the bodywork it needs probably won't justify its value when done. Since I bought it, I've put in a set of well-used but sound Recaros, and generally cleaned it up.
Here's a pic of her sucking juice from the Electric Vehicle charging post at the hotel where I live during the week:
http://gallery.me.com/mstecker/100205/R1--204/web.jpg " 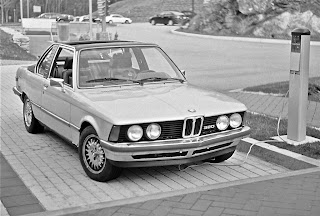 Baurspotting has been able to develop some information on a number of other Baurs here over the past 10 months, notably vev's wide body Baur in VA, conkitchen/doc john's Baur in California/Arizona, and msbehmane36's Baur in PA.

In addition to identifying and locating all the TC1 Baurs in the US, we hope to continue to develop as much history on each car as we can, as you have seen above.

Stay tuned, we are just getting started!