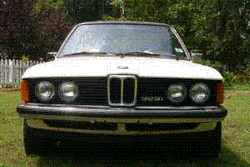 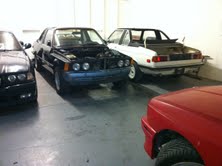 You may (or may not) recall the discussion months ago about a Baur (pictured below in the sidebar) that was found in an old ad on the True Gear Head website.

I have posted this in the sidebar of my blog since about February. I contacted the folks at True Gear Head about the ad, but they had no info on it. We had a rumor that it may have gone to Georgia, but we could never pin that down.

Today, as you may have read in the "Wanted: Crushed or Alive" bimmerforums thread, I received an email from Eric B. in California, who is the guy who bought the car from Beaufort. It currently resides in his shop, and, if I understood his email correctly, he owns ANOTHER Baur also! (See pic above.)
http://forums.bimmerforums.com/forum/showthread.php?t=1606105&page=2
I have responded to Eric's email, and I hope to have more info from him to report: car details, Baur plate number, how he learned about us, etc.

This did give me a chuckle this morning, btw, when I was thinking..... who was the more surprised.... Eric when he saw his car posted with this headline:
"The Baurhunter: Have you seen this Baur? Beaufort, SC", complete with a picture of his car.....

.... or me, when I received his email stating he's the owner of the famous Beaufort Baur!!