I posted this tonight in E30 bimmerforums in response to some comments from some folks whom I believe have no idea of the significance ot the BMW Baurs.  This is the Baur from Perris CA that sparked the conversation. 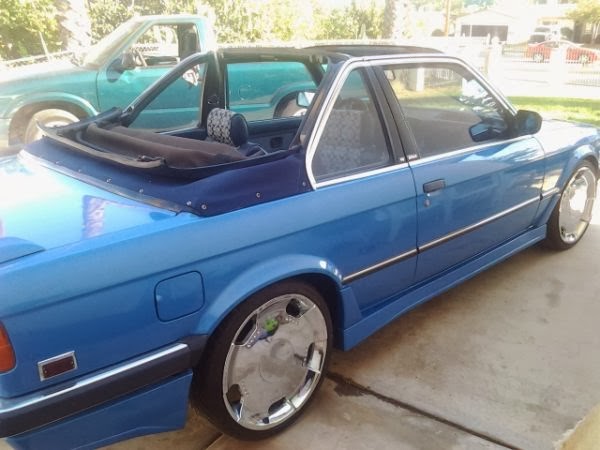 What many people do not understand about these cars is that they are historical artifacts: there is a REASON for the unusual design! At the time that they were buit there was a widespread, and well-founded concern that all convertibles were going to be outlawed by the US Govt, among others, because of a concern about the safety issue of convertibles in a rollover accident. You can look it up... it was a real threat at the time.

Consequently, everyone STOPPED making convertibles! Tell me how many 1980 US factory convertibles you can find! I double-dog dare you!


You will not find ANY! Only custom conversions.

The last factory American convertible was the 1976 Cadillac Eldorado..... manufacturers de-tooled and production of convertibles stopped. With a few exceptions, the only way you could get a convertible after that was through a custom coach builder, like American Sunroof. By the mid-80's, the scare had passed, and no one had actually outlawed the convertible. Factory production of convertibles resumed in the mid-80s. The BMW E30 convertible appeared around 1987... and Baur conversion production diminished, and eventually ended. Baur produced the BMW 1600 and 2002 Voll Cabrios, the 2002 Cabrio Targa, the E21 Top Cabriolet (4595 built), the E30 Top Cabriolet (10,865 built in Stuttgart, and about 3,000 more built under license in South Africa), and a limited number (a few hundred?) of the 4 door E36 Top Cabriolets.

BMW contracted with Baur, a well-esteemed coach builder (since about 1910) to do conversions of BMW coupes. The unique "ugly" design of the BMW Baurs is a direct response to the concern about the rollover danger: the two part roof design (front targa and rear foldown soft top) incorporates a roll bar! That is the reason it looks the way it does! The Baur 'Top Cabriolet " design is a direct answer to the rollover safety concern prevalent at the time. The Baur top cabriolet is therefore a product of its times, an historical artifact.

I believe that therein lies the value. We have found about 90 E21 Baurs in the US; I dont have a firm number at the moment on how many E30 Baurs there are in the US, but it is similarly rare, from what we have seen. 2002 Baurs (both the Voll Cabrios and the Targa Cabrios) are extremely rare, and, as far as we know, there are NO E36 Baurs in the US.

So, the design of the Baur Top Cabriolet is certainly an acquired taste, and it is not for everyone. If that is your only concern, then you really shouldn't buy one. You are missing the point. It is a car with a story about a particular point in automotive history. The fact that, at least in my case, it is also a blast to drive, and a car that inevitably attracts curious, questioning onlookers... is just an added bonus. I will never sell it.

It should be noted that an E30 Baur Top Cabriolet has just been accepted at one of the largest car collections in the US: the Lemay Family collection in Tacoma, WA. This could be the first step in recognizing its historical significance.

I hope this doesn't come across as a rant... but I do feel strongly about the above, and it appears that the Lemay Museum agrees with me. I think that is a good thing, and a harbinger of things to come.

If someone grabs that Baur in Perris for a good price, I am confident that they will never regret it. The new owner can change the things he doesn't like.... the wheels, for example, the color, etc.  In addition to owning a very unique and fun convertible BMW, they will also own a piece of history. Not many car owners can say that! Nuff said!