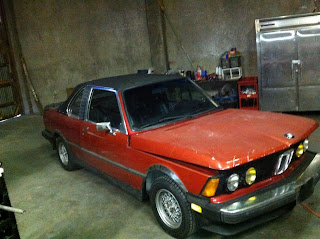 Conkitchen, a bimmerforums member from California, has put his Baur up for sale.  The car has some historical provenance, and it is a fascinating project.  Check it out.  No affiliations, other than my obvious interest in promoting, preserving and driving Baurs!

Here is the link to his listing:

His car project is mentioned several times in various places in the "Baur TC1 in the US" thread in bimmerforums, with pics in several places:
http://forums.bimmerforums.com/forum/showthread.php?p=22066368#post22066368

I am hopeful that someone will snap up this car and continue the project.  The Baur plate is from this car once owned by Michael Baur, but it was unfortunately wrecked and crushed. The Baur plate, however, was saved.

Here is some of the conversation conkitchen and I had in bimmerforums in December 2010 about the history and progress of the car:

conkitchen:  Tom & Jeroen, Thanks to the forum member Steve C. I have the tags from this car. Sadly it was beyond repair and went to the crusher. I have taken on the endeavor to resurrect the car with a donor body. Seen in the image. Some of you will recall this “donor” gem on ebay a while back. It came with no BAUR identification due in part to the front end having been completely replaced. The only remaining evidence of ever having been a real TC1 (non 323) was some of the euro parts, roof assembly, plus the two rivet holes for the euro spec ID tag (not baur tag) on the passenger side were evident. Otherwise, the VIN comes up as a 1979 US model.

So for those of you tracking the whereabouts, here is an update. ;-)

Here is how it is shaping up. Rubinrot is a good color to be risen out of the ashes 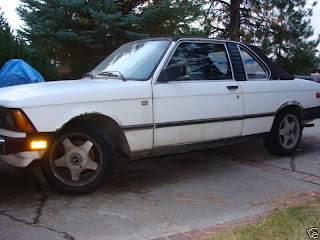 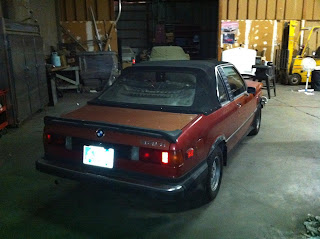 tom82baur (tomscat1):  So, if I understand you correctly, you have tags from #2565 (of which nothing else remains??), and you have the body of another Baur (unknown Baur number?).... and you are resurrecting a Baur. What Baur # will it be when resurrected?
Kudos to you, btw, for taking this on.

conkitchen:  "The only bad thing is that the fender VIN stamp and title from 2565 I do not have as it was surrenderd to the crusher. However I do have a clean title for the 79 (unkown BAUR #) e21.

That is just how it's has to be, but the car will live on in spirit."

UPDATE 7/8/2011 Conkitchen informs me that his Baur has been sold to John F. of Scottsdale, Arizona. Congratulations on the sale, and welcome to new Baur owner John F (a k a docjohn in bimmerforums)! 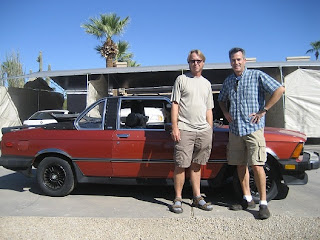 Here are Mark R (another Baur owner) and conkitchen's Baur new owner docjohn with his Baur in Arizona last October. 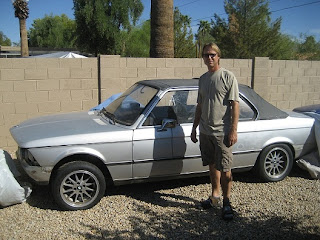 Here is Mark R. with his Baur that same day.  Mark purchased this Baur in Tucson in December 2010, and we have been trying to find him ever since!  I have attached part of the thread  from bimmerforums below that relates to our search and eventual discovery of this car.  It is a funny story!

Tomscat,
I am amused that a guy in Connecticut is responsible for connecting two guys that are practically in the same neighborhood, perhaps 2-3 miles away. Mark and I met this morning and had some good conversation about our cars. He's a very decent, knowledgeable and capable person. I'm glad to know him. Much appreciation for connecting us through your PM's.

If I understand you correctly, the Mark R that you just met with the Baur in Scottsdale, is THE SAME Mark that jimjim mentions in his thread last December... the guy that bought the $300 Baur in Tucson!!! And that is the same car that sisith mentions in 2008.

This is EXACTLY the kind of thing we have been talking about all along: several separate reports of Baurs from separate sources at separate times..... turn out to be the SAME CAR! Baur #118. Incredible.

Wow. It took us 10 months, with help from jimjim, docjohn, bimmerforums member sisith and, of course, Mark R himself.... but we frickin' NAILED IT! What a great story! Great job, fellas, and thanks for all of your help!!!

And, docjohn, I agree that it is just too funny how this worked out to get you two virtual neighbors hooked up like this! We are working hard here at Baurspotting, and this kind of stuff is just what we hope for! And don't forget.... toyotech has seen another Baur in Tempe. If there is some way to get your three Baurs in the same pic..... you will have recorded the largest convocation of E21 Baurs in the US this year! In MANY years, perhaps! Who da thought that could happen in Arizona!!??


The attached pic is from jimjim's January 2010 post in this thread.
UPDATE: some more info from jimjim back in January 2011:
tomscat1
"I help you . Yes it was federalized once owed by dan kenny ?
engine 2.0 320/6, 4 speed
James"
"I had his name miss spelled
It's {dan Kennedy} sorry"
"Is Dan Kennedy your friend who just bought it for $300?

Thank you again jimjim for that info. So we know that Dan Kennedy owned it in 2007; bimmerforums member "sisith" sold it to Mark R. Unless 'sisith' is also Dan Kennedy, it appears we have the past three owners of Baur 118 going back to 2007. Great stuff!