It has been a while since I had the chance to fiddle with my 1973 2002 project, for one reason or another.  As I am sure you all know, these cars need to be driven.  They don't take well to sitting unused for extended periods of time.  Here is a case in point. 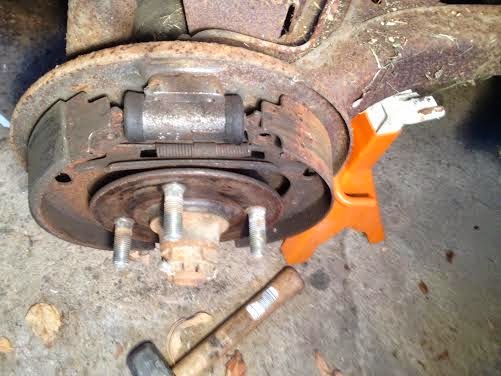 A couple of weeks ago, I went out to the garage to let the 1973 2002 run for a bit.  I do try to do this periodically.   I also realized that I hadn't moved it around  at all recently, probably since I moved it into the garage last summer.   It was a beautiful day, with temps in the high 50's.  I wanted to move it out into the driveway, sand off a bit of the surface rust on the rear, and hit it with a coat of primer before the cold weather sets in.

It usually has to crank for a few moments before it fires up, and this day was no different.  After about 30 seconds of cranking, vroom, and we are in business.  I let it warm up for a bit, and sure enough it settled down to a nice idle shortly.  I put it in reverse to back out of the garage, but I can feel it resist the move.  Hmmm.  I check to make sure the emergency brake is released, which it is.  Double hmmm.  Something is frozen, probably from just sitting too long.  Day um.

Well, this shall not stand.  :)  Damn the torpedoes, full steam ahead!  This car is moving out into the driveway, one way or the other.  So, I put it in reverse again, give it a little gas, and .... I can hear whatever it was that was frozen.... release with a snapping noise.  A man's gotta do what a man's gotta do, right?  ;)

The car is now in motion, backing successfully out of the garage into the driveway.  I decide to give it a few runs up and down the driveway, (I have long driveway) to see if whatever was frozen is still an issue.

The good news is that whatever it was.... it isn't frozen anymore.  The bad news is.... I can hear a dragging noise when the car is in motion, which appears to be coming from the right rear wheel.  I am tempted----sorely tempted--- to take it out for a spin in the neighborhood, but the prospect of finding out the source of that noise on a 'shakedown cruise'  a mile from home gives me pause.  Discretion is the better part of valor, they say:   so I decided that I would rather find the problem with the car in my driveway than out and about somewhere where I may need a tow!    :)

In fact, that day I decided to ignore the problem altogether, and stick to the original plan.... to do a little sanding and hit it with some primer, which is exactly what I did.

So today was the day to deal with the brake noise.  I mentioned that the noise appeared to be originating in the right rear area.   Today I jacked up the car in the garage (in 32 degree weather, btw), and tried turning the right rear wheel.  (I used a big floor jack and wheel stands, btw.  Always use redundant safety systems.)   The wheel would turn freely for a moment, then it would seem to bind up.  Why was it binding up?  That was the noise that I was hearing when I drove it a few weeks ago. 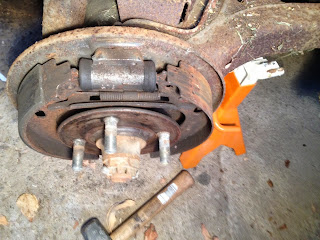 I pulled the wheel off, using my cheap Harbor Freight electric impact wrench.  :)  Shameless plug, I know but, guess what?  I am at the age where I recognize that it beats the hell out of doing it by hand!  ;)

The pic above shows you what I found after pulling off the drum.   Note that the brake shoe on the right has no lining!  Whoa!
I looked down into the cover to find: 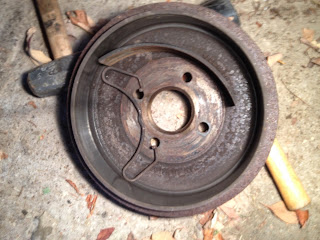 You can see the retaining spring at the left center of the pic along with the lining from the front shoe!  My theory is.... this lining was frozen to the drum.  When I revved the engine and threw it in reverse, I broke the frozen lining free..... not only from the drum, but also from the shoe itself!  When I tried to rotate the wheel, the loose lining was floating free and then getting jammed in the drum, causing the binding and the noise!  Day um!   :)

Long story short, I ordered a new set of shoes for the rear brakes this afternoon.  I will install them in the next few weeks, as time allows, and we will be back in business.

Moral of the story:  DRIVE these babies:  don't let them sit and atrophy!  :)

BTW, I haven't really mentioned it, but I am getting ready to do my 2002 as a two tone.  I am not in any rush, since it is already two tone, albeit in red and white primer.  Those are not the final colors, btw, and that is all I am going to say about that!  Other than that, I am REALLY psyched about the colors I have chosen!  ;)