You guys have been really well-behaved, so here's a little non-Baur treat that I thought you might enjoy. 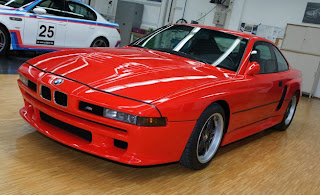 Before Kay Segler leaves BMW’s M GmbH performance division to once again head the Mini brand, he has opened the vault to show a number of rarely or never seen concept cars and proposals from the division’s rich 25-year history. We were able to take a close look at the vehicles and quiz engineers and executives about the thinking behind these cars and why they didn’t make production. (The current-gen M3 pickup that debuted last week, is sure to join this collection one day, too.)
8-series “Der Bolide”

To create the engine for this 8-series, BMW essentially took two 3.0-liter M3 engines and welded them together at a 60-degree angle. This V-12 produced 520 to 550 hp—enough thrust to get from 0 to 60 in a little over 4 seconds and reach a top speed of over 200 mph. The series car’s pop-up headlights were omitted to save weight and space. The car made it pretty far in development and could have been offered as an M8, although its internal moniker was “Der Bolide,” literally “the fireball.” Weight was between 3100 and 3300 pounds—well below the 850CSi, which used a 375-hp version of BMW’s regular V-12. The 850CSi made it into series production; the 6.0-liter V-12 of the wild concept was further developed and ultimately powered race cars and the McLaren F1.

The V-12 engine used for the 8-series project was also put into a first-generation X5, dubbed the X5 Le Mans. With this 700-hp monster, race driver Hans-Joachim Stuck lapped the Nürburgring Nordschleife in 7 minutes, 49 seconds. At Döttinger Höhe, a 193-mph top speed was measured. The rear-wheel-drive X5 Le Mans was shown at the Frankfurt auto show but never intended for series production.
X5 Rear-Wheel-Drive Project

This first-generation X5 looks almost unchanged from a regular model, save for the round air intakes in the front bumper. Under the skin, however, serious changes transformed it into a racer: Power came from a 400-hp V-8 taken from the third-generation M5 and was transmitted to the rear wheels only through an SMG automated transmission. The SUV was not put into series production, and BMW decided to go for all-wheel drive instead with the subsequent X5 M and X6 M.
M3 Touring

The ultimate compact station wagon? BMW created an M3 conversion of the E46 touring. With its wide body and M-specific interior, this M3 touring looks ready for series production. But BMW decided against it. We hope to see an M3 wagon yet.
E30 M3 Pickup

This M3 pickup was used strictly on the company’s premises, as it lacks street homologation. It was obviously used with little mercy, and it served as inspiration for this year’s April Fools’ Day project. Besides this company project, a few E30 pickups were actually built by small aftermarket companies in the 1980s—specifically for the Greek market, to use a tax loophole.
M3 Compact

Two M3 versions of the 3-series compact (the body style sold here as the 318ti) were built: one with the 282-hp, 3.0-liter engine, and one with the 317-hp, 3.2-liter engine. BMW studied bringing this car to market carefully, finally deciding not to. The idea now lives with the 1-series M Coupe.
M5 Cabriolet

At a time when the super-expensive 8-series, which was available as a coupe only, had replaced the 6-series in BMW’s lineup, M GmbH came up with a proposal for a two-door M5 Cabriolet. The concept found many friends within BMW and was supposed to be shown to the public, but it was killed by the board shortly before its debut.
M’s Z3 Proposal

When BMW M GmbH had its own styling department, its designers were asked to bid on new projects. This is their proposal for the Z3 roadster, questionable in the looks department, but extremely lightweight, and flexible in terms of additional body variations.
5-series Touring High-Roof

This 5er is strictly a show car intended to demonstrate M GmbH’s portfolio of skills. It is designed to transport your sports bike and gear, and its high roof with integrated search lights is a rather curious alteration. Would BMW build such a car for customers? Not likely: “Such a modification would be far too expensive,” I am told.

[Show as slideshow]
[View with PicLens]