3 M1s for sale in Hemmings!

Thanks to my friend, Ed Poole for the link to this bonanza in Hemmings:   three M1s for sale!   Too bad I am not in the market for one.  ;) 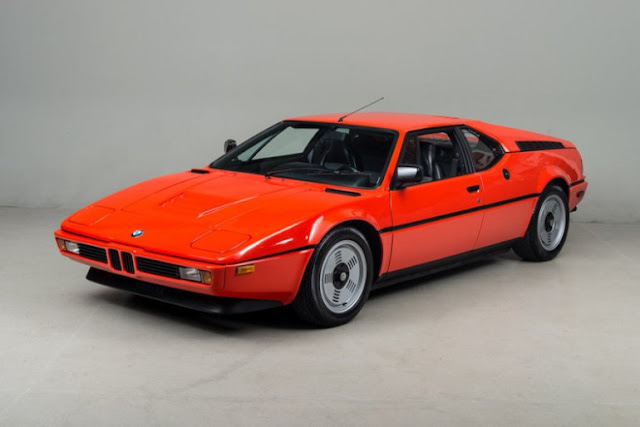 The BMW M1 was the first production car from BMW Motorsport. Clad in Italian bodywork by Giorgetto Giugiaro, and built by German specialty coachmaker Baur, this example of the E26 was imported into the US on March 27, 1980. DOT compliance testing soon followed in Los Angeles on May 25,1980, where it passed with flying colors.
Its first owner was Kenneth Lloyds of Key Biscayne FL, who owned the car until 1986 when it was purchased by David Coffin of Sunapee, NH with only 8,778 km (5,454 miles) on odometer. Coffin, a car aficionado and collector, used the car sparingly for the next ten years. In 1996 the car moved on to a new owner, Robert Greene of Santa Cruz, CA with 12,162 km (7,557 miles) on odometer.
Knowing the collectable value of his M1, Greene put the car away in storage, only taking it out to have it inspected and smogged. The result of this careful preservation was that in 2012 this E26 had only 12,237 km (7604 miles), and was still in immaculate, original condition.
The M1 has spent the last three years in the private collection of a BMW dealer in Albuquerque, New Mexico, and has covered only 800 miles since 2012.
Designed by one of the world's greatest automotive stylists, and built by hand, this amazing low mileage car is a clear window into a unique period of automotive history. This original, unrestored M1 comes with its tools, manuals, spare and jack. Like all the automobiles at Canepa, it's been thoroughly assessed and detailed, both cosmetically and mechanically, to ensure it meets and exceeds the expectations of collectors that drive their cars.
About the M1
The M1 is an iconic sports car, and launched BMW's ''M'' motorsports division. BMW hand built just 453 M1s, making it one of their rarest models. Of those, only 399 were built for the street. The rest were destined for racing. The M1 was a mid-engine supercar. Its 3.5 liter four valve, twin-cam inline six was good for 277 horsepower and 239 lb-ft of torque. The performance and handling were impressive, especially at speed. The handsome Giorgetto Giugiaro design successfully blended Teutonic and Italian machismo in a style that, 30 years later, still looks surprisingly current.
The E26 M1 project was approved by BMW AG in 1976 under the condition that it would not interfere with the production of any other BMW model. The M1 was developed to show that BMW was a legitimate manufacturer of sports cars that could compete with Porsche and Ferrari on the street, and to offer a purpose-built machine that could participate competitively in the Group 4 and Group 5 racing series.
BMW Motorsport initially contracted Lamborghini to assemble the cars with engines produced and shipped from Germany. However, severe financial troubles at Lamborghini forced BMW to terminate their agreement with the Italian supercar maker. Thus, the production examples of the E26 M1 were partially assembled at Ital Design in Turin using fiberglass bodywork supplied by T.I.R and tubular spaceframes supplied by Marchesi. Final assembly was then conducted at the Baur coachworks in Stuttgart, Germany. Each M1 was then given a final inspection at the BMW Motorsport facility in Munich before being delivered to its owner.
There are many conflicting production numbers regarding the E26 M1. The official BMW production figures show that 453 examples were produced in a three-year period between July 1978 and July 1981. Of these, between 54 were competition versions, while the remaining 399 examples constitute the road-going street cars. It is thought that the final street-legal M1 (non-Procar) was produced in February 1981.
Odometer at 13586 Kilometers = 8441 miles 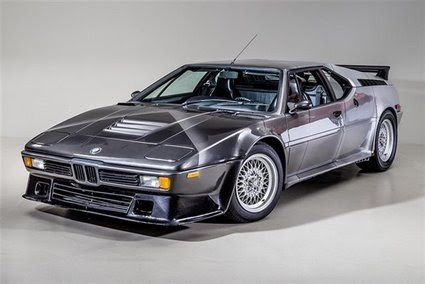 1979 BMW M1 AHG
VIN: WBS0000009430109
One of 10 AHG M1 Studie cars ever built AHG upgraded 350 horsepower engine AHG M1 Procar-style bodywork Number 94 of approximately 454 M1s produced Started as a spare body for a Procar The first question usually asked about this vehicle is ''What is an AHG M1 Studie?'', and that is an understandable query considering that only 10 were ever built.
Start with one of the 399 street BMW M1s, and then do the following: upgrade the engine to 350 horsepower and mate it to a special racing clutch and a new exhaust system; add an adjustable racing suspension and three-piece 16-inch BBS wheels, which were 8-inches wide up front and 9-inches wide at the rear; install a front air dam with brake ducts, wider front and rear fenders, side skirts, and special rear wing to give the car a Procar look; then finish the car off with Cibie lights, a leather interior, upgraded stereo, and a special ''art car'' paint by Hermann Altmiks.
The M1 Studie package was prohibitively expensive, not just for the extensive work done to the car, but also because the modifications had to be TÜV-certified in Germany. This required extensive testing and approvals, which only added to the cost. Allegedly, it was the rear wing that was the costliest part to get approved, and eventually it had to be made from a soft material to pass German regulations. Due to low production and custom ordering each AHG car is unique. Who ordered these cars? Most were available only to special BMW customers and race drivers.
This vehicle, number 94 of 454 M1s produced from 1979-1981, started its life as a spare body for a Procar, but was then assembled as a series production car and delivered to a BMW AG Niederlassung. It was then sold as a street M1 to its first owner from Mainz, Germany in November of 1979. In October of 1981 it moved on to what is believed to be the first owners daughter. According to AHG it was then sold to an artist who used the car as a canvas featured in expositions and newspapers. That paintwork is still vaguely visible under the current paintwork.
094 returned to the AHG dealership in May of 1983, who then fitted the car with their special package. The famous German paint shop of Hermann Altmiks was hired to apply the current custom paint scheme. The engine was completely rebuilt and now puts out 350hp as opposed the stock rating of 277hp. The rebuild was completed 1200km (746 miles) before it was shipped to the US in 1984. Since then the car has only covered an additional 6000km (3728 miles.)
4301094 was purchased by an American collector in November of 1983 from Automobile International in Munich, West Germany. It arrived in the US in March of 1984, and received its EPA release letter in December of that year. When imported this M1 was modified for DOT compliance, but was released as EPA exempt (not street legal in California). Full DOT/EPA documentation is included. The NHTSA released the car in 1985, and the car began to appear in shows soon after. 4301094 was very active in the BMW scene until the late 90's, when it was put in storage as a long term collectible.
In October of 2012 the M1 was awakened once more, and over $3500 in original BMW parts were used in its resurrection. Now in the hands of Canepa the car is receiving a thorough inspection and will be given the care it requires to meet our exacting standards.
About the M1 and AHG The E26 M1 project, which helped launch the BMW Motorsport division, was approved by BMW AG in 1976 under the condition that it would not interfere with the production of any other BMW model. The M1 was developed to show that BMW was a legitimate manufacturer of sports cars that could compete with Porsche and Ferrari on the street, and to offer a purpose-built machine that could participate competitively in the Group 4 and Group 5 racing series.
BMW Motorsport initially contracted Lamborghini to assemble the cars with engines produced and shipped from Germany. However, severe financial troubles at Lamborghini forced BMW to terminate their agreement with the Italian supercar maker after only a few cars had been produced. Going forward the production examples of the Giugiaro-designed E26 M1 were partially assembled at Ital Design in Turin using fiberglass bodywork supplied by T.I.R, and tubular spaceframes supplied by Marchesi. Final assembly was then conducted at the Baur coachworks in Stuttgart, Germany. Each M1 was then given a final inspection at the BMW Motorsport facility in Munich before being delivered to its owner.
Unfortunately the Lamborghini delay meant that the M1 would never see direct competition with the Porsche 935 in Group 5 racing, instead BMW created a one-make series call the BMW M1 Procar Championship, or simply Procar. The series pitted professional drivers from the Formula One World Championship, World Sportscar Championship, European Touring Car Championship, and other international series against one another using identically modified BMW M1 sports cars.
While the Procar series only lasted two seasons, from 1979 to 1980, its popularity was undeniable. With their flared fenders, imposing front spoiler, massive rear wing, and incredible speed, the M1's presence on the race track left a lasting impression.
In 1982, after the series ended and production for the M1 was completed, Peter Gartemann, the president and owner of the German BMW dealer AHG, had the brilliant idea of creating a limited-design study that was based on the look of the Procar M1s but was intended for the street. This option, which was open to well-to-do BMW customers, involved having the AHG Motorsport division take an owner's standard road going M1 and transform it into the ultimate Procar-style street fighter. From the outside, the changes are clearly apparent, but the modifications didn't simply end with the race-inspired body.

Here is the third M1:

Unfortunately, I cannot access the ad tonight, because it went to auction at Sotheby Arizona on January 28, 2016.  The ad was taken down.  Check the Sotheby's results to see what happened to it.