This is amazing news!  Wow.  My guess is that Mercedes bought it to have in their museum collection.  We shall see.  In a related story at the bottom, I would love to know what #722 would bring at auction!  Sir Stirling Moss' Mille Miglia record-setter, a Mercedes 300 SLR!  Pic below. 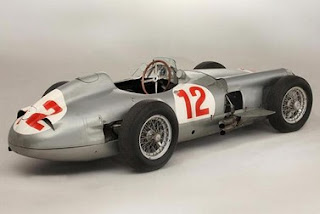 By Graham Kozak
The Mercedes-Benz W196R chassis 00006/54 roared to victory in the 1954 German and Swiss Grands Prix with none other than Juan Manuel Fangio behind the wheel.
We don’t imagine it roared across the block at this week’s Goodwood Festival of Speed Bonhams auction (a crowd simultaneously reaching up to cover its ears would cause quite a bit of confusion from an auctioneer’s perspective) but the results were incredible anyway: Bidding reached $29,619,826 before the hammer fell.
Yes, nearly $30 million. That’s just less than double the current record price paid for a car at auction: $16.4 million for a 1957 Ferrari 250 Testa Rossa sold at Pebble Beach in 2011. 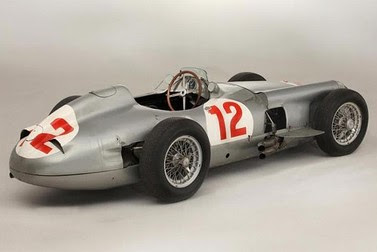 Bonhams
Mercedes-Benz W196R chassis 00006/54 sold at auction for almost $30 million.
Of the 14 W196s produced by Mercedes-Benz, 10 exist today—a survival rate a good deal better than that of the men who drove the cars. But Fangio’s association with chassis 00006/54 makes it, well, special. One-of-a-kind, in fact. That it even entered private hands at all is a bit of a surprise.
Mercedes retained ownership after it was retired from racing, but at some point the car was sold—first to a British collector, then to a French collector, then to a German collector and then it was bought and sold once more, which brings us to where we are today.
We’re not sure who will take the car home now, but their wallet is significantly lighter. The fuel-injected, tube-framed, open-wheeled legend would tuck into the Mercedes-Benz Museum’s existing quiver of Silver Arrows quite nicely. It’s hard to imagine that the automaker would pass up a chance to reclaim this automotive artifact; earlier this year, when news that the car would be auctioned broke, we asked a few Benz officials if they had any interest in acquiring it. They seemed surprised that the car had resurfaced but wouldn’t give us anything beyond a hasty (if tantalizing) “no comment.”
So we’ll see.
A few other bits of W196 automobilia crossed the block ahead of chassis 00006/54, some even attainable for those without the GDP of Tuvalu at their command. A child-size drivable model of the car sold for a not-too-shabby $8,688, though its 50cc engine can’t hold a candle to the 2.5-liter version in the real deal (not that you’d want to trust your little Fangios with anything possessing that sort of power).
A one-eighth-scale version of the famous car cost $5,288, and for enthusiasts on a hard budget, a Fangio-signed photo of the driver in a W196 at the 1955 Monaco Grand Prix could have been yours for a mere $1,133.
Fangio’s Mercedes-Benz W196R sells for record-setting $29,619,826 originally appeared on AutoWeek.com.
http://www.marketwatch.com/story/mercedes-benz-sells-for-almost-30-mln-2013-07-13

I would love to see what THIS one might be worth! 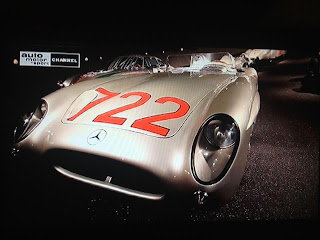 I think this may be the single greatest piece of automotive
journalism I have ever read.  Denis Jenkinson rocks!
Baurspotting loves Sir Stirling anyway (see previous
Stirling Moss posts in Baurspotting), but this story just
had me on the edge of my seat.... brilliant!